Remembering Sister Ardeth Platte, a prophet of peace in a culture of aggression 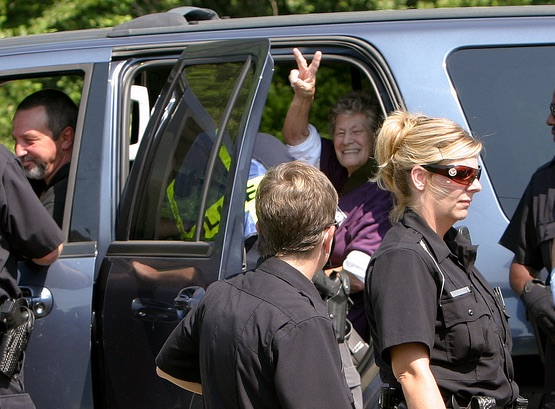 Sister Platte is arrested protesting at the Y-12 nuclear weapons plant in Oak Ridge, Tenn., in 2010.

In a 2004 letter from Danbury Prison, Ardeth Platte, O.P., wrote, “With hope we give our lives for a world without wars, weapons, and walls, regardless of the consequences.” The longtime peace activist who died last week at the age of 84 modeled and preached much of what Pope Francis proposes in his most recent encyclical, “Fratelli Tutti.”

She will be remembered as a prophet of peace in a culture of aggression.

Sister Platte would be overjoyed to see just war theory challenged and nuclear weapons condemned at the level of a papal encyclical, a moral vision she championed for over 40 years.

In “Fratelli Tutti,” Pope Francis writes: “We can no longer think of war as a solution.... [I]t is very difficult nowadays to invoke the rational criteria elaborated in earlier centuries to speak of the possibility of a ‘just war.’”

“International peace and stability,” the pope writes, “cannot be based on a false sense of security, on the threat of mutual destruction or total annihilation, or on simply maintaining a balance of power.... [T]he ultimate goal of the total elimination of nuclear weapons becomes both a challenge and a moral and humanitarian imperative.”

Sister Platte’s efforts to challenge nuclear weapons resonate with Francis’ call for “peacemakers, men and women prepared to work boldly and creatively to initiate processes of healing and renewed encounter.”

Sister Platte would be overjoyed to see just war theory challenged and nuclear weapons condemned at the level of a papal encyclical, a moral vision she championed for over 40 years.

“The Gospel was everything to Ardeth, that and our Dominican charism of preaching the truth,” said Carol Gilbert, O.P., her longtime friend and collaborator.

Sister Platte spent upward of six years in jails and prison as a result of her protests against nuclear weapons with the Plowshares Movement; she continued a correspondence with many of the women she met in jails and prisons all over the  country. Her life inspired the character of Sister Ingalls on the popular Netflix show “Orange is the New Black.”

Her Dominican charism inspired her to walk “into the place of lies, saying the truth and knowing that the truth has its own power beyond whatever immediate reaction you might get,” said the Rev. Terrence Moran, who knew Sister Platte from her years at Jonah House in Baltimore, Md.

I remember reading about the anti-nuke nuns in high school. The drama and incongruencies of their witness impressed me: nuns in hazmat suits breaking chain linked fences, praying in nuclear weapon facilities, throwing blood on the Pentagon and smiling their way to prisons.

I first met Sister Platte when we were arrested with 70 other Catholics protesting the treatment of immigrant children. Staying with her at the Dorothy Day Catholic Worker Community in Washington reorientated my understanding of religious life and Christianity in general; I’d never encountered people who lived the Gospel with such intensity.

Her peace and justice advocacy took many forms over the years. She served on the City Council in Saginaw, Mich., for 12 years, taking on a variety of issues. “The first thing she did on City Council had to do with fair housing for gays and lesbians,” Sister Gilbert said.

Sister Platte spent upward of six years in jails and prison as a result of her protests against nuclear weapons with the Plowshares Movement. Her life inspired the character of Sister Ingalls on the popular Netflix show “Orange is the New Black.”

She ran a school for dropouts in inner-city Saginaw and organized to rid Michigan of the hundreds of nuclear cruise missiles and squadrons of B-52s hosted by the state at two air bases, a multi-year process that ultimately succeeded. In 2017, she and Sister Gilbert represented the International Campaign to Abolish Nuclear Weapons at the United Nations in efforts to draft a treaty to prohibit nuclear weapons.

I.C.A.N. won the Nobel Peace Prize in 2017 after drawing attention to the “catastrophic humanitarian consequences” of nuclear weapons and because of its involvement in pushing a nuclear ban treaty through the United Nations.

Like their founder, St. Dominic, the sisters spent the last three years engaged in itinerant preaching. They traversed the country, teaching folks about the treaty, delivering copies of it to military bases and politicians and advocating for its ratification. So far, 46 countries have ratified the U.N. treaty; only four more are needed for it to become binding.

Sister Platte was convinced the treaty would be ratified and nuclear weapons would eventually be abolished. “She did not have the slightest doubt that this was possible.... She had a relentless hopefulness,” said Father Moran.

Sister Platte was a figure who bridged two epochs. In many ways, she embodied what people either love or hate about Vatican II: a nun without a habit, a model of a poor church for the poor, a Christian active in the political sphere and a woman of intense conscience unwilling to compromise on the demands of the Gospel or cease assisting those on the margins.

Even in a T-shirt and jeans, though, she reflected the discipline and devotion of the pre-1965 church and convent life. Her years as a teacher shaped her profound curiosity in young people. She recalled the humiliations of Christ when she found herself in handcuffs; in a prison letter during Lent 2005, she wrote about friends counseling her not to take on too many penances.

Sister Platte “was confounded that young people were not running to religious life. She saw that there was so much freedom in this life.”

Joergen Ostenson, Sister Platte’s godson, a senior at Fordham University, received a letter from her each year on the anniversary of his baptism. The last one arrived on the morning she died.

“She really understood the meaning of what baptism represents and what it meant to be a godmother,” Mr. Ostensen said. He recalls visiting her at Danbury Prison with his parents at the age of 5. “I remember seeing her in her prison uniform...and that we had ice cream with rainbow sprinkles.” The memory is so vivid because of that unlikely juxtaposition, he said.

“The greatest gift an older person can give a younger person is a consciousness of the world,” Mr. Ostensen said, “a radical consciousness that makes it so that we understand that when the U.S. government spends millions of dollars on nuclear bombs and billions on a military industrial complex and doesn’t provide for the poor, that they are doing something evil.”

Pope Francis proposes a similar consciousness in “Fratelli Tutti”: “With the money spent on weapons and other military expenditures, let us establish a global fund that can finally put an end to hunger and favour development in the most impoverished countries.”

Sister Platte’s religious life was the foundation of her work. She was a member of the Grand Rapids Dominican Sisters for 66 years. “She was confounded that young people were not running to religious life. She saw that there was so much freedom in this life,” said Sister Gilbert.

Sister Platte boasts an impressive record of arrests, influential work on the Treaty to Ban Nuclear Weapons and connections to a Nobel Peace Prize and U.S. pop culture.

She used that freedom to offer her freedoms up, delivering herself into prisons, into poverty, and giving herself over to the intense and demanding task of cherishing and protecting the dignity of others.

Sister Platte boasts an impressive record of arrests, influential work on the Treaty to Ban Nuclear Weapons and connections to a Nobel Peace Prize and U.S. pop culture.

But these are not the first things people mention when they speak of her. They talk about her enormous capacity for love, an ability to hold in tandem the tenacity to speak truth to power and the tenderness to express love to people who might otherwise be perceived as an enemy.

In this, she models what Pope Francis exhorts in “Fratelli Tutti”: “[C]harity finds expression not only in close and intimate relationships but also in ‘macro-relationships: social, economic and political.’”

When I asked Sister Gilbert what she learned from Sister Platte over the years, she said with tears: “I learned to be a more loving person.... And she taught me not to ignore the works of justice.”

Sister Platte used to say that she refused to make an enemy of anyone. “The spiritual discipline it takes not to allow anybody to be your enemy is a breathtaking accomplishment for a human being,” said Father Moran.

Thinking about Sister Platte’s life in the last week, I recall words from the Rite for the Ordination to the Priesthood: “Conform your life to the mystery of the Lord’s cross.”

This was Ardeth Platte. What is conformation to the cross but the giving up of one’s life and freedoms to enter places of darkness and evil in nonviolent love?

Her friend Daniel Berrigan, S.J., wrote in his autobiography:

What does a truly human life look like, in such times as we are enduring? In answering, I approached and reached a point at once dazzling and darksome. The point being the political and social consequences of the cross of Jesus. It is a point of sacrifice. I know that in its pristine rigor and crude innocence—even in its imperialized grandeur, the cross, (which is to say, the crucified One) invites the living to the heart of reality, in an embrace as guileless and self-giving as it is indifferent of consequence.

These words could be said of Sister Platte, who was born on Good Friday in 1936. Her life is a reminder in times such as we are enduring of someone who accepted the consequences of living the Gospel.

“Here was a person,” Sister Gilbert said, “who gave her life in wanting a world that was just and peaceful for all.”

William Critchley-Menor, S.J., is studying philosophy and American studies at St. Louis University. He is a member of the Midwest Province of the Society of Jesus and a former editorial intern at America Media.

@billymenorsj
Show Comments ()
Join the conversation: Login or create an account
Before you can comment, you need to update your profile to include your first and last name, as required in our comments policy. Then reload this page and you'll be set up for commenting. Update your profile