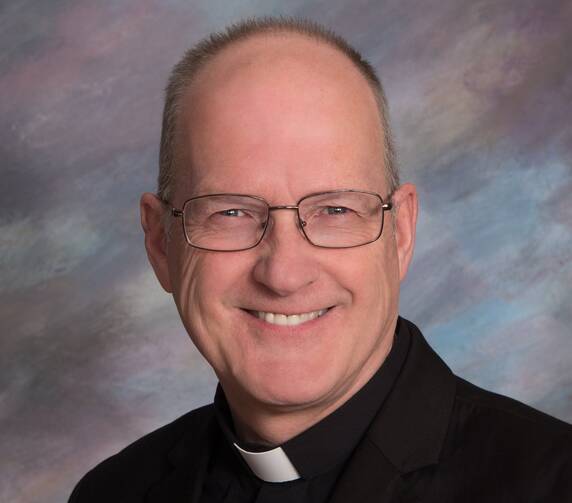 On June 19, 2020, the pope had appointed him to head the Diocese of Duluth, Minn., but he had not yet been installed. Father Mulloy is pictured in an undated photo. (CNS photo/courtesy West River Catholic)

Pope Francis has today accepted the resignation of Michel Mulloy, the bishop elect of Duluth following an allegation of the sexual abuse of a minor and a subsequent investigation.

The Vatican announced the resignation at midday today without mentioning the abuse allegation.

The explanation for the allegation came soon after in a statement issued by Bishop Peter Muhich of Rapid City, the diocese where Father Mulloy had been a priest at the time of his episcopal appointment on June 19. Before his recent appointment as bishop of Rapid City, Bishop Muhich had worked as a pastor in Duluth.

Pope Francis accepted the resignation of Michel Mulloy, the bishop elect of Duluth following an allegation of abuse of a minor and a subsequent investigation.

The statement says that “subsequent to Fr Mulloy’s appointment” as bishop of Duluth “on August 7, 2020, the Diocese of Rapid City received notification of an allegation against Father Mulloy of sexual abuse of a minor in the early 1980’s.”  It made clear that the diocese “has no other allegations of sexual abuse involving Father Mulloy.”

After the allegation, it said Bishop Muhich of Rapid City “following the established procedure, informed law enforcement of this development” and “Fr. Mulloy was directed to refrain from engaging in ministry.”

It said, “Fr. Mulloy received a summary of the specific allegation against him and submitted his resignation as Bishop-elect of the Diocese of Duluth to the Holy Father, which has been accepted.”

The statement concluded by announcing that “the Apostolic Nunciature has communicated that Msgr. James Bissonnette will continue to serve the Diocese of Duluth as Diocesan Administrator, until the appointment of a new Bishop.”

An informed source contacted by America, but who requested not to be identified because he was not authorized to speak, pointed out that “the three principles” underlined at the February 2019 summit in the Vatican on the protection of minors were operative in this case, namely: “responsibility, accountability and transparency.” Bishop Muhich had followed all three, the source stated. Moreover, the source said, “it is significant that the victim trusted the system to work and came forward with this allegation after almost 40 years.”

The source concluded that “this will serve notice to all candidates that they should not accept [the nomination as bishop] if there is something in their past which will in all likelihood come out should they receive a higher level of attention at the time of their nomination.”

Although it was not mentioned in the statement quoted above, America has learned that the Diocese of Rapid City will follow the process laid down by the pope and will report to the  Congregation for the Doctrine of the Faith, which will in due course instruct the bishop on what next to do regarding Father Mulloy.

This is not the first time that a priest has been appointed bishop but had to resign soon after. It happened most recently in Poland under Pope Benedict XVI. He appointed a new bishop to Warsaw, but the prelate had to step down before his installation after it was revealed that he had worked with the secret police in the Communist era. In 1986, Pope John Paul II appointed Hans Herman Groer, O.S.B., as archbishop of Vienna and made him a cardinal but he had to resign in 1995 because of allegation of sexual abuse of a minor.