Pope Francis will sign new encyclical on human fraternity at the tomb of St. Francis of Assisi 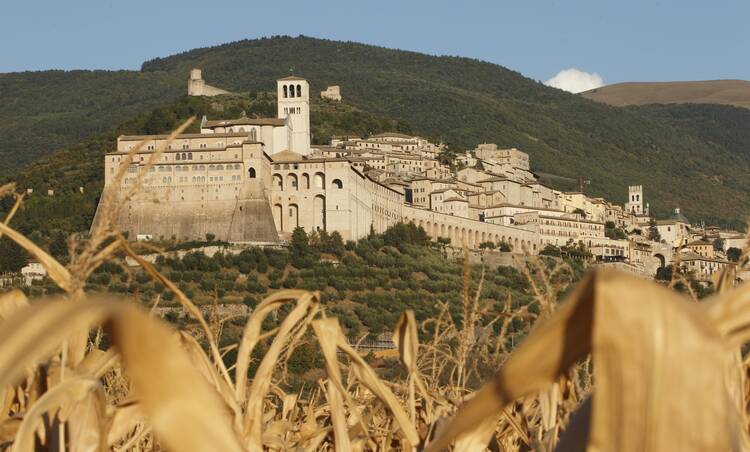 In this 2011 file photo, the Basilica of St. Francis with its bell tower is pictured beyond a field of corn in Assisi, Italy. (CNS photo/Paul Haring)

Pope Francis will travel to Assisi on Oct. 3. to sign a new encyclical on human fraternity at the tomb of St. Francis of Assisi, the director of the Holy See Press Office, Matteo Bruni, and the press officer of the Franciscan community in Assisi, the Rev. Enzo Fortunato, announced at midday today, Sept. 5.

Mr. Bruni said the new encyclical will bear the title “Fratelli tutti,” which could be translated as “Brothers and sisters, all,” although the Vatican has not yet given the official English translation.

The new encyclical will bear the title “Fratelli tutti” and it will be released on the feast of St. Francis on Oct. 3.

The words “Fratelli tutti” are from St. Francis of Assisi, just as were the words “Laudato Si’” which the pope chose as the title of his second encyclical. It is highly significant that the Argentine pope has decided to sign the encyclical at the tomb of St. Francis. As he has stated on numerous occasions, his ministry as successor of St. Peter has been greatly influenced by the saint of Assisi and his love for the poor, so much so that on his election as pope he took the name Francis, the first pope ever to do so, a name that also conveyed a program.

Pope Francis will celebrate Mass at the tomb of St. Francis, and at the end of Mass he will sign the encyclical. Mr. Bruni stated that “because of the health situation,” meaning the Covid-19 pandemic and the related health norms, “the Holy Father wishes to make the visit in a private form, without the participation of the faithful.” He added that “once the celebration has ended” the pope will return to the Vatican.

The custodian of the Franciscan complex at Assisi, known as the “Sacro Convento,” the Rev. Mauro Gambetti, said in a press statement: “It is with great joy and prayer that we welcome and wait for the private visit of Pope Francis. An event that will highlight the importance and necessity of fraternity.”

Sources say the encyclical will focus on the theme of human fraternity, that is recognizing each other as brothers and sisters, and the importance of this in the contemporary world for the promotion of peace, harmony and solidarity between individuals and nations. The theme was at the heart of the ground-breaking document on human fraternity that Pope Francis and the Grand Imam of Al-Azhar, Ahmad Al-Tayyeb, signed in Abu Dhabi on Feb. 4, 2019. Francis will develop this theme in the new encyclical from the Christian perspective, while at the same time reaching out to others too.

The theme takes on a particular relevance given the dramatic situation in the world today in which the coronavirus pandemic is causing great suffering to millions of people in more than 188 countries and territories.

News of the new encyclical was first broken on Aug. 26 by Monsignor Domenico Pompili, the bishop of the Italian diocese of Rieti, who is close to the pope. It will be Francis’ third encyclical. The first was “The Light of Faith” (“Lumen Fidei”), published on June 29, 2013, less than four months after his election to the papacy. Conceived by Benedict XVI for the Year of Faith, it became the first encyclical in the history of the Catholic Church to be written by two popes. Benedict XVI had substantially drafted it before he resigned; Pope Francis finalized and published the text.

Pope Francis’ second encyclical was “Laudato Si’,” on the care of our common home. It was published on June 18, less than six months before the Paris Conference on Climate Change, which it greatly influenced. Its global relevance is widely recognized today.