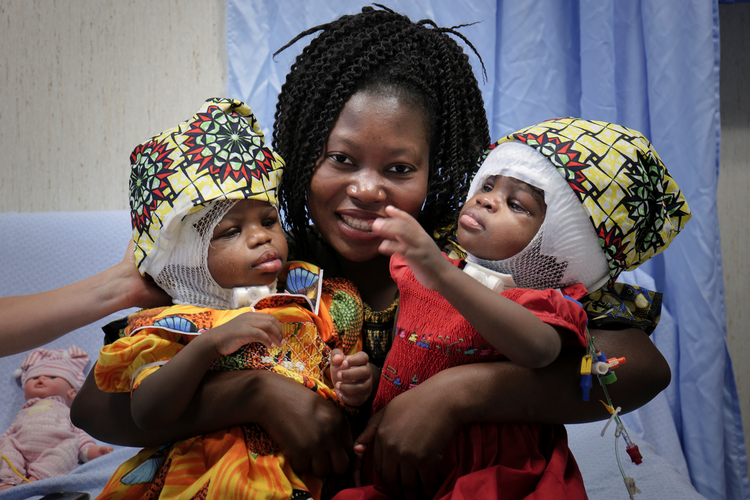 Twin sisters Ervina and Prefina, who had been joined from the back of the head since birth, are pictured with their mother, Ermine, at the Bambino Gesu hospital in Rome in this photo released July 8, 2020. (CNS photo/courtesy Ospedale Pediatrico Bambino Gesu via Reuters)

VATICAN CITY (CNS) -- Their heads encased in white bandages covering the wounds where they had been conjoined, 2-year-old twins named Ervina and Prefina were baptized by Pope Francis Aug. 6 in the chapel of his residence.

The babies from the Central Africa Republic are still hospitalized at the Vatican-owned Bambino Gesu pediatric hospital in Rome, a spokesman said Aug. 10. But their mother, identified only as Ermine, "really wanted the pope to baptize them."

A team of doctors, led by Dr. Carlo Marras, chief of neurosurgery at the hospital, performed the final separation surgery June 5. The hospital held a news conference a month later to announce the successful separation of the conjoined twins and their progressive recovery.

Their heads encased in bandages covering the wounds where they had been conjoined, 2-year-old twins named Ervina and Prefina were baptized by Pope Francis in the chapel of his residence.

Dr. Marras attended the baptism, according to a photograph tweeted by Antoinette Montaigne, a former government official in the Central African Republic and lawyer specializing in children's rights.

Pope Francis visited a hospital when he went to the Central African Republic in 2015; returning to Rome, he asked the Bambino Gesu Hospital in Rome to begin a project there.

Mariella Enoc, president of the Rome hospital, met Ermine and her newborn twins during a visit to Bangui in July 2018 as part of the project to establish a pediatric medical center there, the hospital said. The twins and their mother arrived in Rome two months later.

After more than a year of tests and studies, particularly given how many veins the babies shared, they underwent their first surgery in May 2019; a second operation followed a month later. New veins and grafts were allowed to grow for a year before the final surgery to separate the girls, who had been joined at the back of the head.

A news release from the hospital July 7 said, "June 29 they celebrated their second birthday looking in each other's eyes."

Provide feedback on this article
Join the conversation: Login or create an account
Before you can comment, you need to update your profile to include your first and last name, as required in our comments policy. Then reload this page and you'll be set up for commenting. Update your profile
Advertisement
More: Pope Francis / Health Care / Vatican