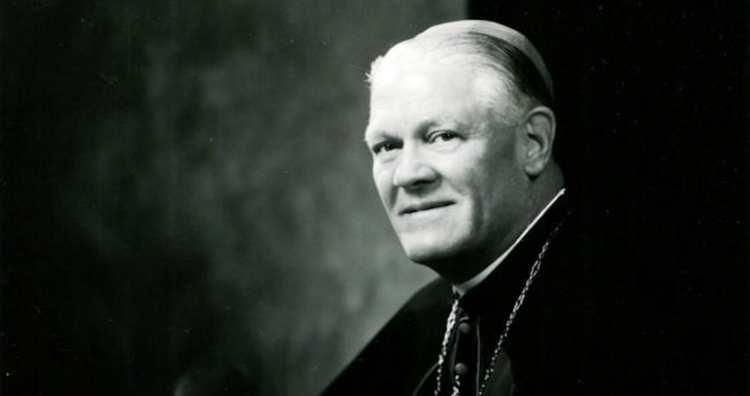 SPRINGFIELD, Mass. (CNS) -- The Diocese of Springfield has released a report submitted by retired Superior Court Judge Peter A. Velis documenting his investigation into a claim of sexual abuse by the late Springfield Bishop Christopher J. Weldon and his finding the claim "to be unequivocally credible."

The report also covers how the diocese handled this complaint and opportunities for improvement on handling future abuse allegations.

Bishop Weldon, a native of the Archdiocese of New York, was installed as the fourth bishop of the Springfield Diocese March 28, 1950, and served until his retirement in the fall of 1977. He died March 19, 1982, at age 76.

Known as the "Building Bishop," his episcopacy was marked by the completion of many construction projects, enhancement of diocesan communications ministries, and implementation of changes recommended by the Second Vatican Council, which he attended.

Allegations of sexual abuse by Bishop Weldon, dating back to the early 1960s, were first related to diocesan staff members in 2014, and in July 2019, Velis was appointed by the diocese to explore and investigate these allegations.

The decision to engage the services of Velis came after it was determined that Pope Francis' recently promulgated "motu proprio" "Vos Estis Lux Mundi" ("You are the Light of the World") on addressing abuse allegations made against bishops would likely not apply to deceased bishops.

The appointment of Velis to this investigation also was preceded by disagreements between the alleged victim, diocesan employees and the Diocesan Review Board regarding the complaint and how it was handled. In the executive summary of his report, Velis was critical of the diocese's handling of the complaint against Bishop Weldon.

"The processing of the complaint was replete with differing evaluations of the allegations and included conflicting analyses, opinions and conclusions," Velis wrote in the summary. "This reflected a clear lack of industry and concern for the quality of the entire process in terms of the scope of the investigation.

"It was clear in my examination that the process included an inexplicable modification and manipulation of the reports received by and acted on by the Diocesan Review Board," he continued. "Additionally the complaint process was compromised in that mandatory reporters failed in their duties to report the allegations to prosecutorial authorities."

Regarding the conclusions reached through his investigation, Velis wrote: "I conducted an intensive and in-depth investigation. Concomitant with it was a haunting consciousness of Bishop Weldon's inability to refute the complainant's allegations. Consequently, I conducted the process in the light most favorable to him.

"However, notwithstanding, I still reached an informed and indisputable conclusion. I found the allegations of the complainant concerning the late Bishop Christopher J. Weldon to be unequivocally credible."

Addressing media at the June 24 news conference, Velis commended Archbishop Rozanski and Jeffrey Trant, appointed last year as director of the diocese's Office of Safe Environment and Victim Assistance, for their insistence on finding the truth of the abuse claims through a rigorous fact-finding investigation. He also noted that all diocesan clergy and staff interviewed were cooperative.

Despite what he termed the "unsavory" nature of the report's subject matter, Velis, who is Greek Orthodox, said: "I came to have the highest respect for the Roman Catholic Church."

Using the "highest standard" of "beyond a reasonable doubt," Velis said, "I stand by the findings as indisputable truth."

Speaking after Velis' remarks, Archbishop Rozanski acknowledged, "This finding will be painful for many Catholics." However, he said, the response to abuse by clergy "must go beyond an apology to real and substantial changes."

Archbishop Rozanski said the diocese will implement procedural changes recommended by the Velis report and by the recently appointed 10-person Independent Task Force on the Response to Sexual Abuse within the Diocese of Springfield.

"We owe this to the victims, their family members, and the faith and civic communities," he said.

Archbishop Rozanski also announced a series of directives and actions in response to the findings in the report:

-- Trinity Health of New England has been directed to remove the former bishop's name from its rehabilitation center.

-- The diocesan cemeteries office has been directed to make plans to remove the former bishop's remains to a less prominent location.

-- All honorable mentions, memorials, and pictures of the former bishop are to be immediately removed from all Catholic facilities.

-- The former bishop's name will be added to the diocesan website listing all those with credible accusations of sexual abuse of a child or vulnerable adult.

Archbishop Rozanski also stated he has notified the Archdiocese of New York, the former bishop's home diocese, of the finding. In addition, he has notified the U.S. Conference of Catholic Bishops and will provide a complete report to the nuncio in Washington as well as to the regional district attorneys' offices.

"Most importantly, I want to sincerely apologize to this victim," Archbishop Rozanski continued, "not just for the terrible abuse that he had to endure as a child, abuse which still haunts him to this very day, but I want to apologize for the chronic mishandling of his case, time and time again, since 2014. In almost every instance we failed this courageous man, who nonetheless persevered thanks in part to a reliable support network as well as a deep desire for a just response to the terrible abuse he endured."

Retired Superior Court Judge Daniel Ford, chair of the independent task force, also spoke at the news briefing. "This is a sad day for the diocese. ... This report names those who have failed and shames them," he said.

Calling past actions "nothing short of disgraceful," Ford said, "The scab has been ripped off the wound. The truth has been laid bare." But he said it also was a happy day for the diocese because "now the healing can begin."

Ford said the goal of the task force is to look to the future, to develop best practices to deal with abuse "and to achieve justice and provide a safe environment for the faithful and for the children of the faithful."

The judge praised the work of Velis on the nearly 400-page report. "He has a well-deserved reputation as being fair and thorough." Ford described the report as exhaustive and said, "Judge Velis has done a great service for the diocese."

Ford also praised Trant. "Jeff is deeply and passionately committed to high ideals," he said. Noting Trant's "remarkable work ethic," he added, "He is a home run for the diocese."

With Trant's leadership, Ford said, victims who come forward now "will be welcomed, will be treated fairly."

"Things have changed,"he said, "and they will continue to change for the better."