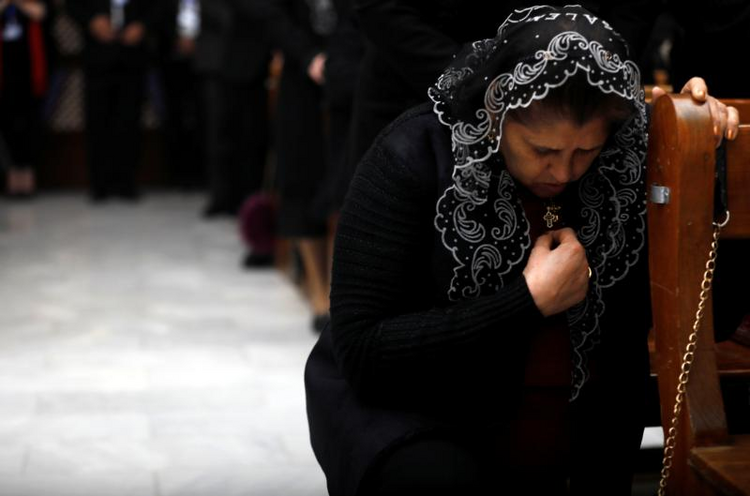 Stephen Rasche is a recognized international expert on persecuted Christians and has served as counsel to the Chaldean Catholic Archdiocese of Irbil, in northern Iraq, since 2010.

He has been key in assisting Chaldean Catholic Archbishop Bashar Warda of Irbil establish anchor institutions such as a hospital and university to help Christians remain in their ancestral homeland following the Islamic State takeover of their towns from 2014 to 2017 and the subsequent liberation.

"As Archbishop Warda says, Christians have survived, and now it's their time to show a reason for them to be needed and not just needy. They survived ISIS," Rasche told an online audience April 28 while speaking to the Washington, D.C.-based Religious Freedom Institute on his recent book, "The Disappearing People: The Tragic Fate of Christians in the Middle East."

Rasche said it was difficult for Westerners to understand the deep trauma Christians in Iraq have experienced.

"If there is going to be any hope for these people to stay, we have to give them lives that at least approach dignity," he said of the fight to shelter people, while trying to stabilize and rebuild their communities.

The lawyer recounted how he worked with Catholic priests and nuns as well as U.S. and international organizations to help the tens of thousands of Christians, Yazidis and other religious minorities who were brutally displaced from their homes by the Islamic State militants.

Whether rich or poor, everyone lost everything they had worked for and owned. However, that blow was the latest they faced in Iraq where, as Rasche said, "they have been systematically persecuted for decades and centuries. The cumulative effect of that is that they've been ground down to this remnant population that has just been brutalized."

Before the U.S.-led invasion of Iraq in 2003, Christians numbered around 1.5 million, but sectarian attacks on churches in Baghdad and other areas soon followed, and the population either headed north or left the country altogether.

Rasche said that while Christian numbers in Iraq have dwindled to about 100,000, "they are still there and are willing to fight for their existence, not with weapons, but with their God-given abilities to show they have a value within the Iraqi fabric. They're a needed element of Iraqi society and not simply needy people."

"This is what the Archbishop (Warda) is working so hard on and those around him in the church as a whole in Iraq, including (Chaldean) Patriarch (Louis) Sako: the Christians need to show that they are needed, not just needy. They are trying to turn this corner now," Rasche said.

Still, the present challenge is that "Iraq is on the brink of being a completely failed state," Rasche said. "There is no functioning government right now, and whether or not they will get one that the people will actually have faith in and begin to build upon is to be determined. All of this is being pushed right now by the protest movement in the south, primarily young Shiite Muslims."

"If they can get through this and the protest movement can reach a point where it can at least push into existence a government which is somewhat responsive to the real concerns of the people, there is still a hope left for the Christians," Rasche argued.

He said private and institutionalized government humanitarian aid, particularly from Hungary, have helped in rebuilding some of the Christian towns in the Ninevah Plain. But following Islamic State attacks, Christians have encountered Iranian-backed Shiite-militia takeovers of their towns and homes in a number of areas. A prominent example is the town of Bartella.

Then-U.S. Secretary of State John Kerry declared in 2016 that the Islamic State was guilty of committing genocide against Christians, Yazidis, and Shiite Muslims, and the U.S. Congress also passed the Iraq and Syria Genocide Relief and Accountability Act of 2018 to provide humanitarian relief to victims of the genocide perpetrated by Islamic State.

But Rasche and other religious freedom activists argue that mechanisms to implement measures on the ground are lacking. And Christian and Yazidi victims say that little has been done to bring Islamic State militants to justice for their atrocities.

On April 24, an Iraqi man believed to have belonged to the Islamic State group went on trial in Frankfurt, Germany. He was accused of genocide and murdering an Iraqi Yazidi child, whom he and his wife held as a slave. He is also accused of committing crimes against humanity, war crimes and human trafficking. His German wife has been on trial for a year at a Munich court in what is considered to be the first formal proceeding anywhere in the world related to the Islamic State group's persecution of the Yazidi community.

Meanwhile, Kent Hill, a co-founder of the Religious Freedom Institute, and currently its senior fellow for Eurasia, Middle East, and Islam, said much more must be done.

He mentioned that centuries ago, Christians took refuge in Irbil during the Roman persecution of Christians. Irbil is that same northern Iraqi town where Archbishop Warda and others have been aiding displaced Iraqi Christians and others.

"It would be a real tragedy if they disappeared from this important land," Hill said.

Provide feedback on this article
Join the conversation: Login or create an account
Before you can comment, you need to update your profile to include your first and last name, as required in our comments policy. Then reload this page and you'll be set up for commenting. Update your profile
Advertisement
More: Iraq / Religious Freedom