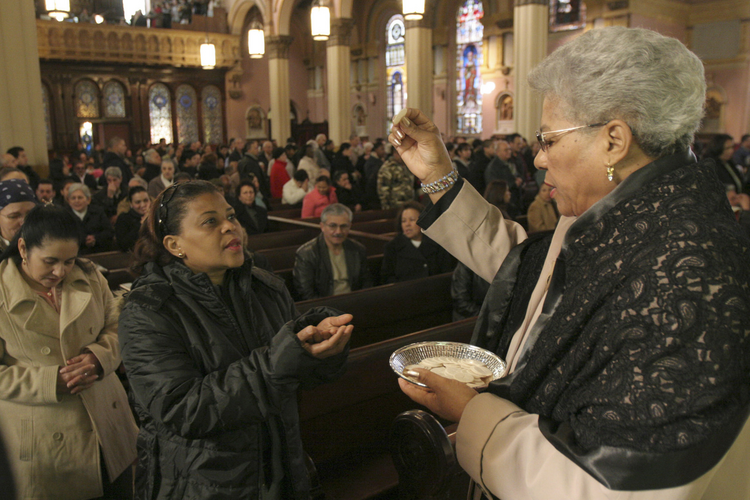 An extraordinary minister of the holy Eucharist distributes Communion during Mass at Transfiguration Church in the Williamsburg section of Brooklyn, N.Y.  (CNS photo/Gregory A. Shemitz)

Pope Francis has set up a new commission to study the diaconate for women, the Vatican announced today, April 8. He had promised he would do so last October as he concluded the Synod of Bishops for the Pan-Amazonian region at which the question was also discussed.

The commission has 10 members, including five women, who are all European, and five men, two of whom are deacons from the United States. Its president will be Cardinal Giuseppe Petrocchi, archbishop of L’Aquila, and its secretary will be the Rev. Denis Dupont-Fauville, an official of the Congregation for the Doctrine of the Faith.

This is the second commission established by Pope Francis to study the question of a women’s diaconate. He agreed to set up a first commission, which focused primarily on the role of women deacons in the early church, in response to a request made in May 2016 at the triennial meeting of International Union of Superiors General of women’s religious orders and established the commission in August 2016.

The members of that commission, however, could not reach agreement in the report they gave him in January 2019, as the pope explained in a press conference on the flight back from Skopje to Rome in May 2019. He said then that they “all had different positions, sometimes sharply different; they worked together and they agreed up to a point. Each one had his or her own vision, which was not in accord with that of the others, and the commission stopped there.”

This is the second commission established by Pope Francis to study the question of a women’s diaconate.

He described the contrasting conclusions drawn by members of the commission, using an Italian expression, as “toads from different wells.” He said that the issue would need further study. The new proposed commission is expected to do just that.

Pope Francis handed the first commission’s report, which has not been made public, to the president of the U.I.S.G. when he met with its leaders at their triennial meeting in May 2019. Francis has not appointed any member of that first commission to this new group.

The Vatican said the pope made the decision to reopen the issue at a recent meeting with the prefect of the Congregation for the Doctrine of the Faith, the Spanish-born Cardinal Luis Francisco Ladaria Ferrer, S.J.

The 10 members of the new commission are all scholars.

Catherine Brown Tkacz is a professor at the Ukrainian Catholic University in Lviv, Ukraine. She has written on women deacons in the early church as well as women as “types of Christ”—characters that prefigured the Messiah—in the Old Testament.

Dominic Cerrato is a deacon and the director of Diaconal Formation for the Diocese of Joliet, Illinois. He previously taught theology at the Franciscan University of Steubenville and has published a book on the theology of the diaconate.

The Rev. Santiago del Cura Elena is a priest of the Archdiocese of Burgos in Spain and former member of the International Theological Commission. He currently lectures on, among other subjects, the Sacrament of Holy Orders at the Faculty of Theology of Northern Spain and has written on “the renewal and deepening” of the theology of ordained ministry in the wake of the Second Vatican Council.

Caroline Farey is a catechist for the Diocese of Shrewsbury in the United Kingdom. Her work was recognized by Pope Benedict XVI in 2012, and she served as an expert advisor to the Synod on the New Evangelization that same year. In 2013, she was one of three top lecturers who resigned from Britain’s Maryvale Institute and went on to found the Center of Formation for the New Evangelization at Belfast Abbey.

Barbara Hallensleben is a professor at the University of Fribourg, Switzerland, and was one of the first women appointed to the International Theological Commission by Pope John Paul II. Her research and teaching has focused in part on ecumenism, and she is a member of the Pontifical Council for the Promotion of Christian Unity.

The Rev. Manfred Hauke is a German theologian teaching in the Faculty of Theology of Lugano, Switzerland. He has previously written on women’s ordination and feminist theology.

James Keating is a deacon and director of theological formation at Creighton University’s Institute for Priestly Formation. He has written several books on the diaconate and Holy Orders.

Monsignor Angelo Lameri is a priest of the Diocese of Cremona in Italy and teaches liturgy at the Pontifical Lateran University. Pope Francis appointed him a consultant to the Office of Liturgical Celebrations of the Supreme Pontiff in 2013.

Rosalba Manes is a biblical scholar and professor at the San Pietro Theological Institute in Viterbo, Italy, and the Center of Theology for the Laity at the Pontifical Lateran University. She has worked on official translations of St. Paul’s letters.

Anne-Marie Pelletier is a French biblical scholar and was the first woman to win the Ratzinger Prize in theology. She was asked by Pope Francis to write the reflections for his 2017 Way of the Cross at the Coliseum.