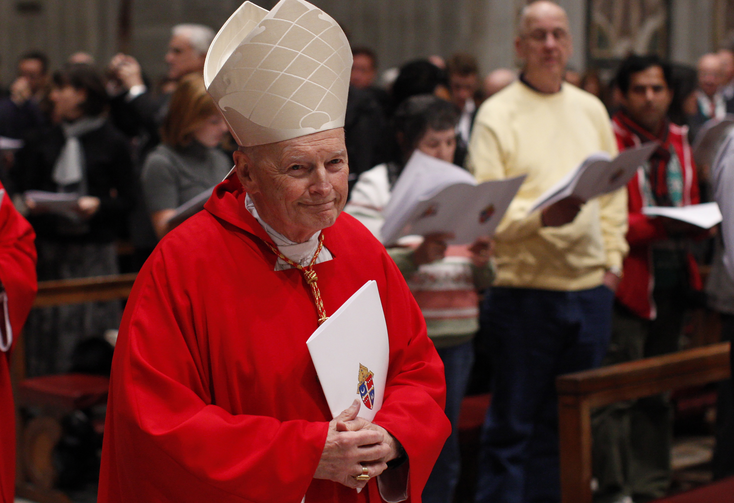 WASHINGTON (CNS) -- Theodore McCarrick, the former cardinal who was laicized by the Vatican in 2019 after numerous claims of abuse by him were substantiated, moved Jan. 3 from the Capuchin Franciscan friary in Kansas where he had been living since late 2018.

McCarrick made the move on his own accord, according to a spokesman for the Capuchin Franciscan province that oversees the friary.

The former prelate had stayed a little over one year at St. Fidelis Friary, run by the Capuchin Franciscan order in Victoria, Kansas, in the Diocese of Salina in the northwestern part of the state.

While his new residence has not been publicly disclosed, one diocese vociferously declared that McCarrick was not within its territory.

"Rumors that the former cardinal Theodore McCarrick has moved to Jacksonville and is staying at a priest retirement facility in the Diocese of St. Augustine are absolutely false. The diocese has made no arrangements for McCarrick to stay at any of its church-owned properties," said a Jan. 8 statement from Kathleen Bagg, diocesan communications director for the northeast Florida diocese.

"It is unfortunate that Church Militant didn't contact the diocese for the truth before posting their inaccurate story to their site. The diocese does not know the whereabouts of McCarrick, and it is not our responsibility to keep tabs on his movements," Bagg added.

Bagg, in her statement, also said: "Be cautious of where you obtain your news regarding the Catholic Church -- and in this case, the Diocese of St. Augustine."

The election of a new provincial for the Denver-based Capuchin Franciscan Province of St. Conrad had no influence on McCarrick's decision to leave, according to Capuchin Father Joseph Mary Elder, director of communications and vocations for the province, which also has a friary in San Antonio within its boundaries.

"There was nothing on our part" that suggested McCarrick leave, Father Elder said. "Our provincial was very clear with him."

Nor was space an issue. Fewer than 10 Capuchins live at St. Fidelis.

"It's a huge place. We have our meetings there and we have enough room for almost everybody," Father Elder said told CNS in a Jan. 10 telephone interview.

"There may have been concern on his part on the report coming from Rome" stemming from the allegations that first surfaced in 2018, Father Elder added. "But that is just conjecture on my part. He was free to stay as long as he wanted to."

McCarrick's life at the friary was uneventful, save for an interview in Slate.

But "he had to be supervised at all times," Father Elder told CNS. "The friary is a big building that adjoins a church," and behind the church was a school, he added.

Wherever McCarrick moved to, he kept his own counsel on the matter.

"The only knowledge we have is that he made plans to leave, and we were privy to his plans," Father Elder told CNS. "That was the first time I heard any plausible location to where he might be."

McCarrick had served as archbishop of Washington and archbishop of Newark, New Jersey, and was founding bishop of Metuchen, New Jersey. He also was a New York archdiocesan priest and auxiliary bishop.

Media interest in McCarrick has followed him since he stepped away from all forms of ministry at the Vatican's request in the summer of 2018.

He was quickly and quietly moved to Kansas after a Washington Post reporter unsuccessfully tried to track him down in late 2018 at the priests' retirement community in the District of Columbia where McCarrick had lived.

That move took place before McCarrick, now 89, was removed from the clerical state.

Then, last summer, a reporter from the online journal Slate was able to conduct a brief interview with McCarrick inside St. Fidelis.

After a query from CNS, Paula Gwynn Grant, secretary of communications for the Archdiocese of Washington, said in an email: "We understand that Mr. Theodore McCarrick has moved. As he is now a layperson, he is responsible for his own actions."