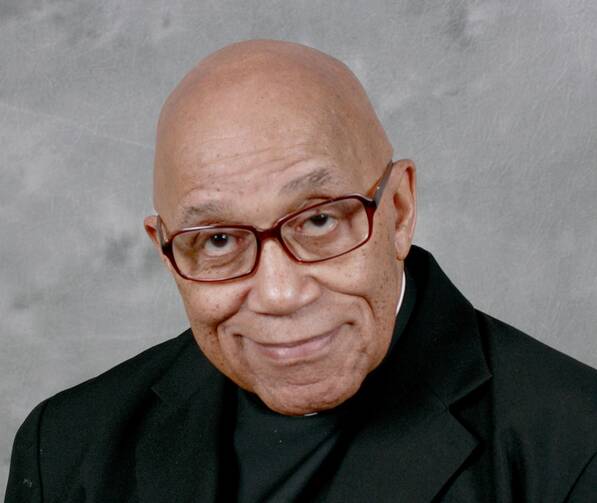 Father George Clements, retired pastor of Holy Angels Church in Chicago, died Nov. 25, 2019, at age 87. Father Clements was active in the civil rights movement and marched with the Rev. Martin Luther King Jr. in Chicago, Alabama and Mississippi. He also was a well-known advocate of adoption and adopted four sons. (CNS photo/Archdiocese of Chicago)

CHICAGO (CNS) -- Father George Clements, whose adoption of not one but four boys was just one of his pathbreaking actions taken as a pastor in the Archdiocese of Chicago, died Nov. 25 at a hospital in northwest Indiana. He was 87.

The priest suffered a massive stroke Oct. 12 and more recently had suffered a heart attack, which his oldest son, Joey, 52, told the Chicago Sun-Times had contributed to his father's death.

Father Clements, who was just the second African American priest ordained in the Archdiocese of Chicago, was long involved in social justice issues affecting his hometown.

But it was the adoption of four boys -- one at a time, starting in 1980 -- that led to his high profile on a national level. The saga -- Father Clements was the first U.S. Catholic priest to adopt a child -- eventually found its way to Hollywood as a made-for-TV movie.

In a 1995 interview with Catholic News Service, Father Clements dismissed the movie. "Most movies -- including the one they made about me -- are filled with hype, you know, because the movies are out for ratings, and so they try to throw in a lot of things that are designed to bring people to the box office," he said.

Less easily dismissed are the priest's efforts. Using his own history as an adoptive parent, he established the organization One Church, One Child, which spread to 32 states at its height. Under the program, a congregation -- it need not be Catholic -- would be responsible for the upbringing of a child. It had totaled more than 170,000 such placements by the time of its 25th anniversary.

In a similar vein, Father Clements created One Church, One Addict, in which a congregation takes responsibility for a drug addict to get them treated for their addiction and to provide opportunities for them once they had stayed off drugs.

Further, presaging the current focus on "returning citizens" released from prison, he founded One Church, One Inmate, in which churches would get a released prisoner job training and counseling as the former inmate transitioned back into society.

The longtime pastor of Holy Angels Parish in Chicago, Father Clements oversaw the rebuilding of the church after it was destroyed in a 1986 fire. The new church ran on solar power for its electrical needs, including air conditioning. After the church was reopened at Easter 1991, he said the parish lost "quite a few" members who were uncomfortable with Mass in a gym, but expected most of them to return.

Later in 1991, Father Clements retired as pastor. He later ministered in the Diocese of Nassau, Bahamas, and the Archdiocese of Washington. He retired from active ministry in 2006.

At the time of his ordination, Father Clements said, he was no firebrand. "I was certainly open to working toward the betterment of African American people in this country," he told CNS. "But I certainly was not defying authority or going out doing any kind of stringent kinds of demonstrations or so forth. I think I'm far, far more militant now than I ever was in 1969," when he became Holy Angels' pastor.

While he was pastor, Father Clements saw the scourge of drugs in his neighborhood. He and Father Michael Pfleger routinely risked arrest -- and sometimes got busted -- for conducting sit-ins at neighborhood stores that sold drug paraphernalia. He helped get an ordinance passed in Chicago outlawing the sale of drug paraphernalia, although his wish to see it become law nationwide never bore fruit. Both priests were subjected to death threats from drug dealers.

Father Clements in the 1980s charged that the American Civil Liberties Union was blind to the immediate need to protect innocent lives caught in the crossfire of warring drug gangs in Chicago. At one point, he said he would seek to test students at the parish school for drugs.

And within a week of his 1991 retirement, Father Clements, with Father Pfleger, was arrested inside the headquarters of the G. Heileman Brewing co. in La Crosse, Wisconsin, while protesting the brewery's marketing of PowerMaster malt liquor to the black community. PowerMaster, which was soon discontinued after the federal government complained, had been the most potent malt from any major brewer.

In 1994, he told an audience of African Americans, "I know why many young black men here in this room don't think much of themselves. When you were teenagers, it should have been drummed into your heads that you will be professionals, you will be astronauts, or polished statesmen, or notable craftsmen, or accomplished academicians. You should have been told over and over again that you will be successful at whatever you try to do."

In August 2019, Father Clements was accused of sexual misconduct. Cardinal Blase J. Cupich of Chicago asked him to step aside from ministry during an investigation into the abuse claim.

Father Clements called the accusation "totally unfounded." "Here I am, 87 years old, and I don't know what this is all about or anything," he told the Chicago ABC-TV News affiliate.

In November the Chicago Sun-Times daily newspaper quoted a spokesman for the Illinois Department of Children and Family Services as saying authorities determined it to be "unfounded" after an investigation found "there was nothing" to support it. The Chicago Archdiocese said the investigation "is still ongoing."

In 1995, well before the clergy sex abuse scandal rocked the U.S. church, Father Clements said: "Had today's climate been around in the '80s, I would never have adopted. ... As a matter of fact, I wouldn't have become a priest! I'm serious about this. Had I known back in 1957 that I was giving my vow of obedience not just to the cardinal archbishop of Chicago and his successors, but I was giving (it) to a review board! A group of people I know nothing about! They could be racists for all I know."

Father Clements, in the same interview, added that despite the racism he experienced in the church, he would not leave it.

"I have no intentions of leaving the Catholic Church, ever. I intend to die as a priest.," he said. "And the reason is because I do not put my faith in the American white Catholic Church. My faith is in Catholicism -- a religion that I believe was founded by Jesus Christ and which I strictly adhere to. And no one is going to push me out of the priesthood. Ever."