The miracle that moved Archbishop Fulton Sheen to beatification 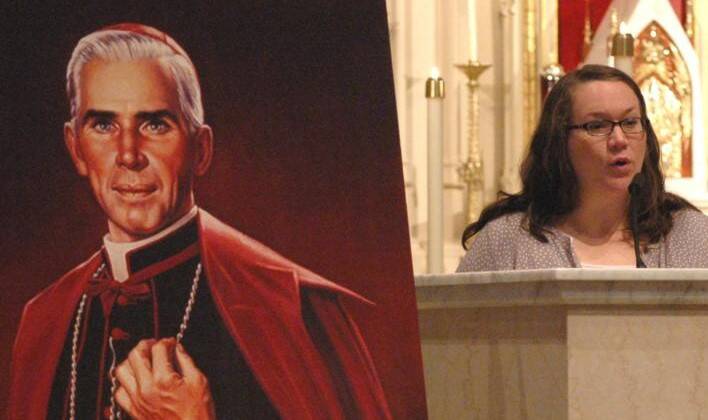 With evidence of her son's alleged miraculous healing boxed and sealed in front of a portrait of Archbishop Fulton J. Sheen, Bonnie Engstrom gives a reading during Mass at St. Mary's Cathedral in Peoria, Ill., Dec. 10, 2011. (CNS photo/Tom Dermody, The Catholic Post)

PEORIA, Ill. (CNS) -- As Bonnie Engstrom watched lifesaving measures being taken for her son, who had been born just moments before without a pulse or drawing breath, she asked for help from the person whose prayerful support she had sought throughout her pregnancy: Archbishop Fulton J. Sheen.

After 61 minutes, just as emergency room personnel were about to pronounce him dead, James Fulton Engstrom began to breathe and his heart rate shot up to a normal level for a newborn. Despite dire prognoses for his future, the child has thrived and is now a healthy 8-year-old who likes chicken nuggets, "Star Wars" and riding his bicycle.

Those who have heard the story of the Washington, Illinois, boy call it a miracle, and Pope Francis has made it official. At a July 5 audience with Cardinal Angelo Becciu, prefect of the Congregation for Saints' Causes, the pope formally approved the miracle attributed to the intercession of Archbishop Sheen, moving him one step closer to beatification.

"It is truly amazing how God continues to work miracles," Peoria Bishop Daniel R. Jenky said July 6 in announcing the pope's approval of the miracle. "I am so grateful that the Vatican acted so quickly after last week's transfer of Sheen's remains from New York to the Cathedral of St. Mary of the Immaculate Conception in Peoria."

Archbishop Sheen had been placed in a crypt below the main altar of St. Patrick's Cathedral in New York after his death Dec. 9, 1979. After protracted legal proceedings, his remains were brought to Peoria June 27 at the request of his niece, Joan Sheen Cunningham, and now rest in a new marble tomb in the Peoria cathedral.

With the miracle confirmed, the Diocese of Peoria can formally begin planning for the beatification of Archbishop Sheen, according to the statement. It added that while the date for that is unknown, Bishop Jenky "hopes and prays" that it will be announced soon.

In a recent interview with The Catholic Post, Peoria's diocesan newspaper, Bonnie Engstrom said God had allowed the miracle to happen for his honor and glory.

After a "beautifully easy" pregnancy, Bonnie Engstrom went into labor with James Fulton the evening of Sept. 15, 2010. Mother and baby had been healthy, and as his planned home birth progressed, he had a "perfect" heart rate.

As they prepared to welcome this baby into their family, which already included daughter Lydia and son Bennet, Bonnie and Travis Engstrom made room for another special friend -- Archbishop Sheen.

"I remember Travis and I were watching YouTube videos of Bishop Sheen preaching and there's old footage of him on a television game show," Bonnie said. "We were so impressed -- he's funny, he's smart, and he's just so approachable and warm. We were just so engaged with him."

While Archbishop Sheen was a world famous media pioneer who also had taught at The Catholic University of America in Washington and headed the Society for the Propagation of the Faith, his roots were just down the road in El Paso, Illinois. They knew his cause for canonization was being sponsored by the Diocese of Peoria, so the Engstroms decided if their unborn child was a boy they would name him James Fulton.

"I started asking, basically on a daily basis, for Fulton Sheen's prayers, for his intercession in the life of my child and in our marriage -- to walk with us and to walk with my son, that he would be a lifelong Catholic who would love God and love his faith, that he would be a man of integrity," Bonnie said. "I was asking him to intercede every day while I was pregnant."

She counted on that intercession again when, unbeknown to them, a rare true knot formed in James Fulton's umbilical cord and tightened during the final stages of labor. He was blue and lifeless when he arrived at 1:48 a.m. Sept. 16, 2010.

And after months of asking for Archbishop Sheen's intercession, she said it was the most natural thing in the world to turn to him again and ask him to pray for her son.

Taken to OSF HealthCare St. Francis Medical Center in Peoria, James Fulton was given advanced medical treatment, but doctors determined he couldn't be revived. After 61 minutes, however, his little heart started to beat.

The Engstroms were told he would probably be blind, and never walk, talk or be able to feed himself, but in the days and weeks that followed the boy defied them all and continued to make progress.

In September 2011, the Diocese of Peoria initiated an investigation into the events of James Fulton's recovery, hearing testimony from family members, first responders, doctors, nurses and others present at his birth. Each testified that there was no medical explanation for the infant's recovery.

The case was sent to the Congregation for Saints' Causes in December 2011, and reviewed by panels of medical experts, theologians, and the cardinals and bishops of the congregation. The miracle received a unanimous recommendation from them all.

The day after Archbishop Sheen's remains returned to Peoria, Bonnie Engstrom brought five of her eight children, including James Fulton, to pray at his tomb.

News about the beatification and the life of Archbishop Sheen can be found at CelebrateSheen.com.