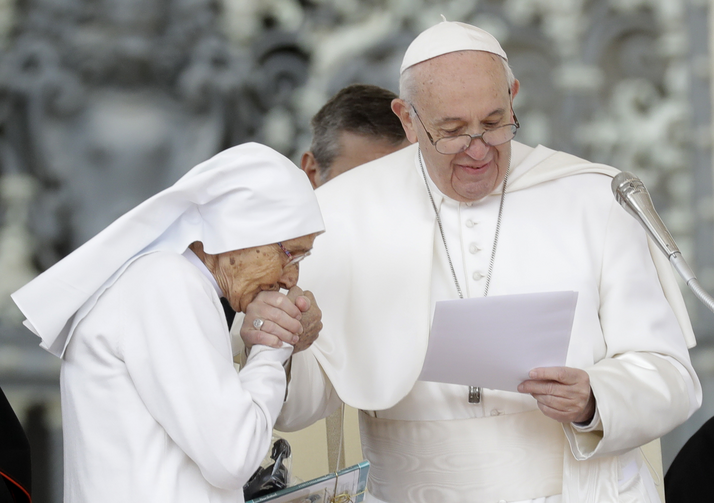 85-year-old sister Maria Concetta Esu kisses the hand of Pope Francis as he presents her with a Pro Ecclesia et Pontifice award during his weekly general audience, in St. Peter's Square, at the Vatican, Wednesday, March 27, 2019. 85-year-old sister Maria Concetta Esu is an obstetrician who gave birth to some 3,000 children during her 60 years of missions in Africa, that the pontiff met during his trip to the Central African Republic. (AP Photo/Andrew Medichini)

VATICAN CITY (AP) — Pope Francis allowed nuns and priests to kiss his papal ring during his weekly audience in St. Peter's Square on Wednesday, two days after a video showing him pulling his hand away from several faithful drew criticism.

Some conservative critics of the pope feel Francis is abandoning church doctrine and tradition, and seized on him jerking his hand away from Catholics seeking to kiss his ring as what they believe is evidence of him shunning age-old traditions.

But many noted that a short clip that made the rounds online didn't give the full picture.

During a visit Monday to Loreto, a major Italian pilgrimage site, Francis received a long line of faithful, some of whom shook his hand, while others kissed his hand or bowed down in a gesture of reverence. He only began pulling his hand away after having greeted a large number of people.

Those coming to his defense noted that he still had to greet sick people and lead a prayer.

The video clip also become material for jokes. Comedian Trevor Noah on the Daily Show on Tuesday evening imitated Francis pulling his hand back and quipped "I am impressed at how quick he is, like every single time."

But Francis on Wednesday allowed nuns and priests to kiss his hand during his general audience.

One of them was Sister Maria Concetta Esu, an 85-year-old nun and obstetrician who has delivered around 3,000 babies as part of her missionary work over 60 years in the Central African Republic.

With Esu standing at his side, and gently helping the pontiff with his papers that were blowing in the wind, Pope Francis told of how he met her in Bangui in 2015, where she arrived in a canoe.

"This is a sign of our affection and thanks for all the work you have done among our African sister and brothers in the service of life, of children, of women and of families," Francis said, presenting her with a medal. She then bowed and kissed his hand.

Among those watching how Francis would act was Archbishop Mark Coleridge of Brisbane, who tweeted: "She kissed his ring!"

Known as the fisherman's ring from the apostle Peter, who was a fisherman and the first pope, Francis's version is gold-plated silver and depicts St. Peter holding the keys of the Holy See. Each pope picks his own ring, which will be destroyed at the end of his papacy, a formality that signifies the conclusion of a pontiff's reign.

postscript;
The nun attended 3,000 births. Women for the most part will birth a baby whether there is an attendant or not. That is the "compelling" nature of the presence of GOD at births.

Shouldn't your copy editors, and the AP's as well, have caught the error that an 85 year old nun gave birth to 3,000 children? At 85 she must have been quite prodigious for all of her life and then some. Incidentally, either she delivered or birthed 3,000 babies.