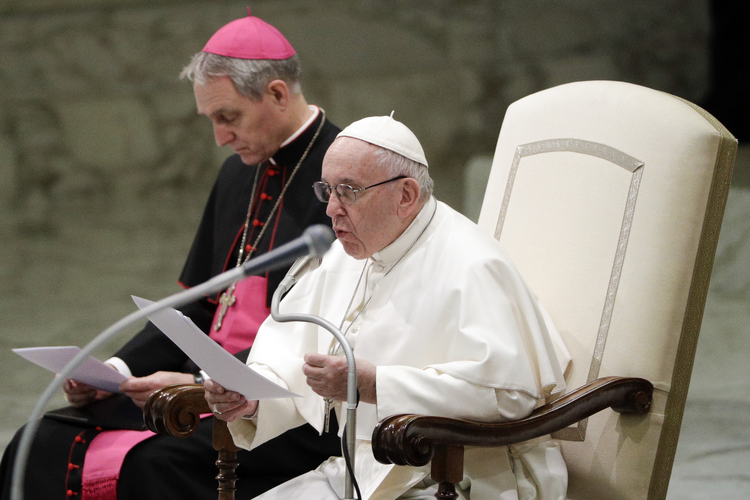 Pope Francis delivers his message in the Paul VI hall on the occasion of his weekly general audience at the Vatican, Wednesday, Feb. 6, 2019. (AP Photo/Gregorio Borgia)

VATICAN CITY (AP) — The Vatican on Wednesday clarified comments by Pope Francis about a case of what he called "sexual slavery" within a French congregation of nuns, saying he was referring to an abuse of power that was reflected in instances of sexual abuse.

Francis cited the case when responding to a question about the sexual abuse of nuns by clergy during a press conference Tuesday returning home from the United Arab Emirates. It was the pope's first-ever public acknowledgment of the problem of priests and bishops sexually abusing nuns. He stressed that the Vatican had been confronting the issue for some time and vowed to do more.

Vatican spokesman Alessandro Gisotti said Wednesday Francis "spoke of 'sexual slavery' to mean 'manipulation' or a type of abuse of power that is reflected in a sexual abuse."

Vatican spokesman Alessandro Gisotti said Wednesday Francis "spoke of 'sexual slavery' to mean 'manipulation' or a type of abuse of power that is reflected in a sexual abuse."

The Community of St. Jean admitted in 2013 that its late founder had behaved "in ways that went against chastity" with women in the order, according to the French Catholic newspaper La Croix. The Vatican under Pope Benedict XVI ultimately dissolved an offshoot of the congregation.

The issue has come to the fore amid the Catholic Church's overall reckoning with the sexual abuse of minors and the #MeToo-inspired acknowledgement that adults can be victims of abuse whenever there is an imbalance of power in a relationship. In the past year, The Associated Press and other media have reported on cases of abused nuns in India , Africa, Europe and South America — evidence that the problem is by no means limited to a certain geographic area.

Pope Francis on Yemen, Venezuela and the abuse of nuns by clergy
Gerard O’Connell

In November, the organization representing all the world's female Catholic religious orders, the International Union of Superiors General, publicly denounced the "culture of silence and secrecy" that prevented nuns from speaking out and urged sisters to report abuse to their superiors and police. And just last week, the women's magazine of the Vatican newspaper L'Osservatore Romano identified the clerical culture of the all-powerful clergy as the culprit.

The magazine, "Women Church World," noted that the scandal involves a corollary: nuns being forced to abort the priests' children or bear children that the priests refuse to recognize.

Francis' acknowledgement of the problem comes as he prepares to decide the fate of the disgraced American ex-cardinal, Theodore McCarrick, who is accused of abusing minors as well as adult seminarians.