It’s a complicated time to be a Notre Dame fan. But I’m still cheering (and praying).

It’s a complicated time to be a Notre Dame fan. But I’m still cheering (and praying). 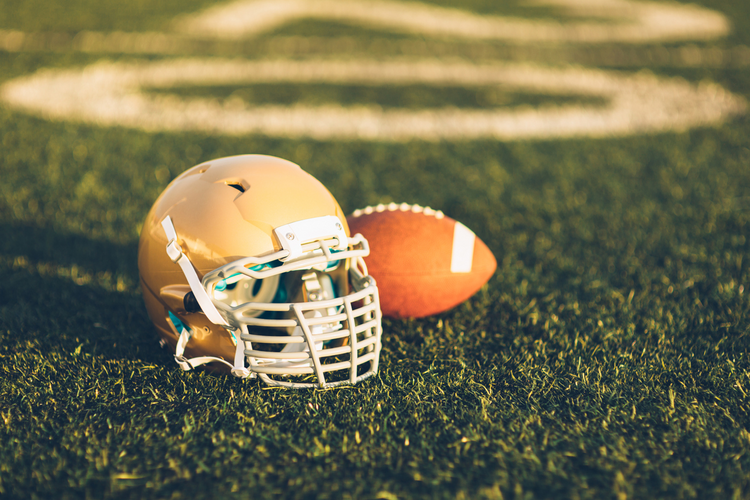 As I process down from the altar on Sunday morning at the small Hungarian-American parish where I regularly preside at Mass, I glance up at the choir loft. The organist is playing the Notre Dame fight song.

This, along with my bad jokes about why I am wearing green vestments, is a regular feature during the Notre Dame football season. And I love all of it.

Coming to the University of Notre Dame for doctoral studies felt like coming home. I will never forget that first night walking down Notre Dame Avenue, dragging my suitcases along, looking up to see the golden dome lit beautifully at night. G. K. Chesterton’s poetic words captured my sentiments perfectly:

One great golden dome stand lonely with its golden image, one
Seen afar, in strange fulfillment,
That Apocalyptic portent that has clothed her with the Sun.

In my Irish-American Catholic home, Notre Dame was a place of legend for me, made even more so by the fact that Rick Thomas, S.J., the Jesuit priest who founded the lay Catholic community in which I grew up, had brought a group of 12 Mexican musicians (whom he called The Apostles) to play at the national Catholic charismatic renewal conference at the Notre Dame stadium in 1978. Coming here was a dream come true.

I will admit that the anxious expectation of this Advent season sometimes had more to do with Dec. 29 than the 25th.

I became an Irish football fan in high school (after a brief and unfortunate stint rooting for Michigan). And now I’m here in South Bend during an undefeated season, 12-0. There is excitement in the air as we prepare to beat Clemson and then take revenge on Alabama for a humiliating loss in the 2013 championship game. I will admit that the anxious expectation of this Advent season sometimes had more to do with Dec. 29 than the 25th.

Irish football games are a time to feel good about U.S. Catholicism, that particular blend of faith and patriotism that constituted the Catholic version of civic religion in the glory days of Notre Dame football in the 1930s. Chesterton sums up these feelings powerfully in his poem “The Arena,” written in 1930 about his experience of visiting the newly opened Notre Dame stadium (though from the telling of the story, he would benefit greatly from the two inches added onto each seat in the recently renovated stadium):

Queen of Death and deadly weeping
Those about to live salute thee,
Youth untroubled; youth untutored; hateless war and harmless mirth
And the New Lord’s larger largesse
Holier bread and happier circus,
Since the Queen of Sevenfold Sorrow has brought joy upon the earth.

I get chills as I read these words and strong feelings swell my heart. But the danger with feelings is that they are so easily misdirected. I read “hateless war and harmless mirth” and feel a warm glow in my chest. But then I ask myself: If Irish football is about “hateless war,” then why do fighter planes, weapons of great destruction, fly in formation over home games with greater and greater frequency? Notre Dame football games are one of the few Catholic places in the United States that still fosters a raw, militaristic patriotism (which fits the neo-Mordor architecture of the new additions built on to three sides of the stadium), and the line between football and war is intentionally blurred.

I walk to the Lourdes grotto behind the basilica, the true heart and center of this campus, and I ask Our Lady to end abortion, to wipe out war, to protect migrants—and to help us beat Clemson.

As the team’s pre-game litany—“Our Lady of Victory, pray for us!”—is streamed live from the locker room over the new Jumbotron, it is not always clear what victory we are praying for. The crisis of traumatic brain injuries causes the “happier circus” line to ring a bit more hollow. Trouncing Stanford brought a special pride, given our history, but that pride is tarnished following the Catholic summer of hell. “Youth untroubled?” That’s not what I hear in my moments of pastoral counseling. What would Chesterton write now? It is a complicated time to be Catholic.

Notre Dame is proud of its slogan: “God, Country, Notre Dame” (in that order). But the ease with which the punctuation slides into “God Country: Notre Dame” has a lot to do with football. As the geographical center of campus shifts southeast from Sacred Heart Basilica to the new student center built onto the football stadium, I worry about whether being Catholic here is sometimes a part of being Fighting Irish instead of vice-versa.

But then I walk to the Lourdes grotto behind the basilica, the true heart and center of this campus, and I ask Our Lady to end abortion, to wipe out war, to protect migrants—and to help us beat Clemson. It is a complicated time to be the Fighting Irish.

The old joke was "What are the two toughest jobs in the Catholic Church? Being Pope and quarterback at Notre Dame and not necessarily in that order. GO IRISH!

The old joke was "What are the two toughest jobs in the Catholic Church? Being Pope and quarterback at Notre Dame and not necessarily in that order. GO IRISH!

She can help with the first three, not so sure about that last one. ;)

Ellen B
2 years ago

Notre Dame's athletic director, Jack Swarbrick was up to his neck in the sexual abuse scandal at USA Gymnastics. According to testimony (of others) he discouraged distributing a booklet on child abuse to USA Gymnastics members. According to testimony from Steve Penny, sexual abuse issues were handled by their attorney.. who happened to be Jack Swarbrick. The Jack Swarbrick who to date has hidden behind attorney/client privilege. Any price for wins? I can see where it might be "complicated" to be a ND fan.

Sports can unify a diverse and fractured community under a common cause. There is a reason team sports have always been part of higher education, it’s where many life lessons are played out and learned. One lesson could be to never look at your teammates in the middle of a game and question their political beliefs, that would be weird. Go ND...

Roy, to Love God first and foremost, is to necessarily Love one’s family, and just as “way leads on to way”, to have a Love for Country and Notre Dame, that always serves as a reflection of God’s Eternal Love.
“For when the One Great Scorer comes to mark against your name,
He writes—not that you won or lost—but how you played the Game.”
Grantland Rice, "Alumunus Football," Only the Brave and Other Poems.

One thing about Notre Dame football -- and I wished you had spoken with him before this article was written. Lou Holtz recounted to me that they didn't take a lot of young men because their SAT's were too low, and the cutoff was pretty strictly enforced.

We Midwest kids, where football is a religion almost as much as Texas and Alabama, used to watch ND football every Saturday afternoon and our Dominican nuns urged us to cheer them on.

Me, I had an uncle who went to ND as a chem engineering major. I had little interest in going to ND although some of my best high school buds went there. I still relish Fordham beating them in the Garden! 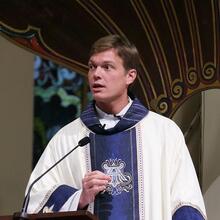 Nathan W. O’Halloran, S.J., is a Jesuit priest in doctoral studies in systematic theology at The University of Notre Dame. He grew up on The Lord’s Ranch.