George H.W. Bush and the call of fruitful leadership 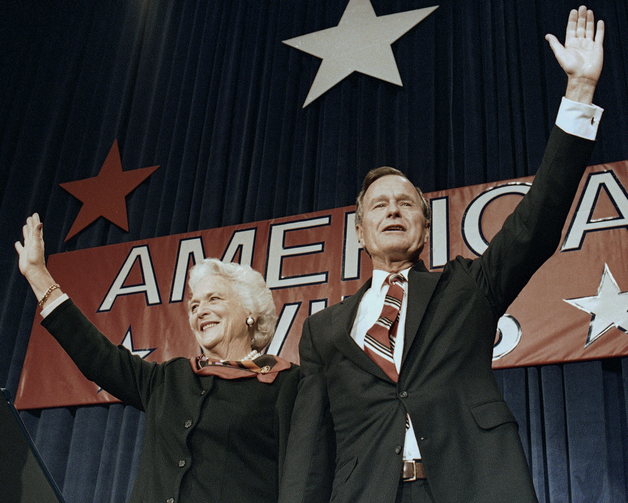 What he wrote was quite true and, considering the author, very touching. In 1993, when Bill Clinton entered the Oval Office for the first time as president of the United States, he found a letter awaiting him on an otherwise cleared desk. It was from his predecessor, President George H.W. Bush, whose recent defeat by Mr. Clinton had denied him a coveted second term. Yet President Clinton read, in the former president’s strong and clear handwriting, “Your success now is our country’s success. I am rooting hard for you.”

It is not the first such letter to be written, though it was the first time in modern history that a president left such a note, not to his own party’s winner but to one from the opposition. Since then, every president has followed the example set by President George H.W. Bush.

Dear Bill,
When I walked into this office just now I felt the same sense of wonder and respect that I felt four years ago. I know you will feel that, too.
I wish you great happiness here. I never felt the loneliness some Presidents have described.
There will be very tough times, made even more difficult by criticism you may not think is fair. I’m not a very good one to give advice; but just don’t let the critics discourage you or push you off course.
You will be our President when you read this note. I wish you well. I wish your family well.
Your success now is our country’s success. I am rooting hard for you.
Good luck—
George

A week after his death, accolades begin to fade just as his obsequies have come to an end. Yet many a partisan source took note of the letter this past week, lamenting how far the United States seems to have fallen from the civility and graciousness it represents.

Like the Messiah himself, good leaders can be recognized by their ability to gather us together.

It does more than this. It also illustrates an Advent theme and a scriptural description of leadership, which is rooted in the Lord. Like the Messiah himself, good leaders can be recognized by their ability to gather us together.

Up, Jerusalem! Stand upon the heights;
look to the east and see your children
gathered from the east and the west
at the word of the Holy One,
rejoicing that they are remembered by God (Bar 5:5).

This gathering of the good is in sharp contrast to the work of the Evil One, whom the New Testament describes as the one who scatters. Diabolis means to shatter or spray, to throw about.

Granted, no leader admits to sowing division. Even the vilest of them claim to call their people to some unity of purpose. So how do we distinguish between fruitful and false leadership?

How do we distinguish between fruitful and false leadership?

John the Baptist appears as the one who calls the scattered ones of Israel together. Two of his traits are worthy of note because they help us to answer our question about good leadership. First, John calls his listeners to something higher, to something that requires more of them. He asks his hearers to embrace a more demanding ethic. St. Paul did the same when he wrote to his little flock in Philippi:

And this is my prayer:
that your love may increase ever more and more
in knowledge and every kind of perception,
to discern what is of value,
so that you may be pure and blameless for the day of Christ,
filled with the fruit of righteousness
that comes through Jesus Christ
for the glory and praise of God (1:9-11).

In contrast, leadership that is not of God tends to speak of what is owed to us and of how we need to claim it for our own. It is always underscoring the idea that we are perfectly fine the way we are. We do not need to change ourselves; no, the world must come to see things our way.

The second quality of leadership rooted in grace is that it does more than preach and pronounce. A good leader lives the message. We should be able to look at the men or women who ask more of us and see that they are equally demanding of themselves. The Baptist is an ascetic, one who rejects the lesser for what is higher.

If you are wondering about those who lead you, ask yourself if they call you to something higher, something that demands your own growth.

If you are wondering about those who lead you, in any area of life, ask yourself if they call you to something higher, something that demands your own growth. And then ask if your leader is personally living the call. Be generous, but do look for signs of sacrifice and personal commitment.

Not much is accomplished by each of us dividing leaders into camps of the fruitful and the false. Depending upon the strength of own partisanship, the outcome would be quite predictable. It is better to expect that, like most divisions in life, this one tends to run somewhere through the middle of every leader.

How are you preparing for Christ’s coming?
Michael Simone

Advent is a time to face your fears
Terrance Klein

God calls us together by calling us to climb. God is one. God is truth, goodness, love and beauty. When each of us seeks these things, when someone leads us in this quest, we naturally come together as we come closer to God. Of course, this involves committing ourselves to the search for these things as they have been revealed to us in Jesus the Christ.

But if we begin with our own picture or vision of God, if we insist that we already possess the truth—which is very different than being possessed by the truth—we tend to see others as opponents. If we are truly seeking God, who simply is the good and the true, we look beyond ourselves and our fellow partisans.

The 41st president of the United States understood that. He realized that once there was a 42nd president, the right thing to write to him was, “Your success now is our country’s success.” Therefore, “I am rooting hard for you.”

Bush Sr. lied the US into the fist Iraq war, W lied it into the second.
https://www.youtube.com/watch?v=Yw0-ASR4sr8

Where is the line between mourning the death of someone and burnishing their record beyond recognition. Much of the media, including AMERICA, has crossed that line.

GHWB must stand on his record. We dishonor history and each other as citizens when we ignore this. A well-crafted letter by a scion son of a storied New England family to his successor is unremarkable. What is note-worthy is the late President's role in Iran-Contra, his treatment of Geraldine Ferraro in 1984, appointment of Clarence Thomas, his opposition to the Civil Rights Act of 1964, and the Willie Horton Ad in 1988. There's more (e.g., pitiful leadership on AIDS, veto of a 1990 civil rights measure that would have expanded job protections, etc.).

Yes, there were a few good things sprinkled throughout (e.g., ADA) but why the pathos about his death when a little more logos is needed? We could chalk this up as a contrasting of one mild-mannered politician with the current abrasive president but the press lost its good sense when Richard Nixon died. This is the way cynicism grows.