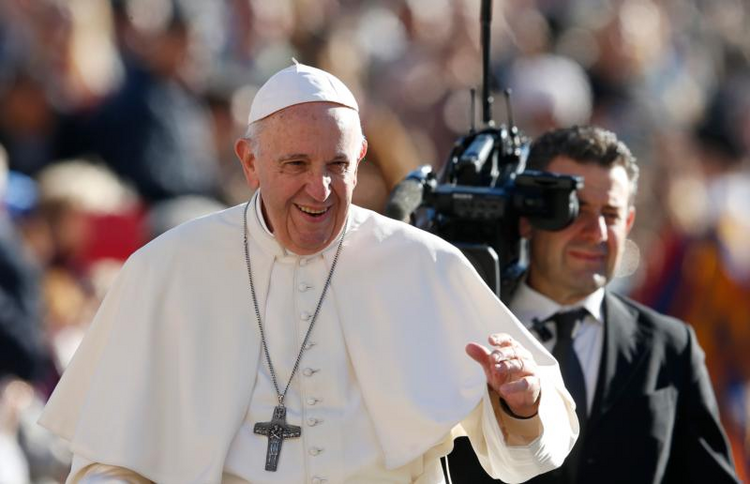 Pope Francis greets the crowd during his general audience in St. Peter's Square at the Vatican Oct. 24. (CNS photo/Paul Haring)

WASHINGTON (CNS) -- Pope Francis has removed Bishop Martin D. Holley of Memphis, Tennessee, from the pastoral governance of the diocese and has named as apostolic administrator Archbishop Joseph E. Kurtz of Louisville, Kentucky.

Bishop Holley, 63, a former auxiliary bishop of Washington, was installed Oct. 19, 2016, as the fifth bishop of Memphis. He succeeded Bishop J. Terry Steib when he retired.

"I humbly accept the appointment of our Holy Father, Pope Francis, to serve as the apostolic administrator of the Diocese of Memphis, while remaining archbishop of Louisville," Archbishop Kurtz said in an Oct. 24 statement confirming his appointment.

"I am eager to work with the priests, curia and faithful of the Diocese of Memphis to promote stability, peace and healing until Pope Francis appoints a new bishop. I have admired the church in Memphis for many years, particularly from my time as bishop of Knoxville," he said.

"I ask for prayers for Bishop Martin Holley as he departs from this local church and for the entire church of Memphis. Let us pray for one another during this time of transition," he added.

Archbishop Kurtz told Catholic News Service in an email message that he had just arrived in Memphis the morning of Oct. 24.

No statement has yet been released by the Memphis Diocese as to what led to Pope Francis' decision to remove Bishop Holley from the pastoral governance of the diocese.

Some months after he was installed as bishop there, Bishop Holley came under heavy criticism from clergy and parishioners for his decision to reassign two-thirds of the diocese's 60 active priests, except for five who were slated for retirement.

Some months after he was installed as bishop there, Bishop Holley came under heavy criticism from clergy and parishioners for his decision to reassign two-thirds of the diocese's 60 active priests.

"No set policy existed at the time Bishop Holley arrived, on how long a parish assignment would last," then-diocesan spokesman Vince Higgins told CNS in June.

"The amount of time a priest spends (in an assignment) depends on the location and influence of the parish," Higgins added. "Associate pastors are moved more frequently, and Bishop Holley has decided to appoint pastors for six-year terms, with a possible renewal of the term for six more years."

Asked about priests' and parishioners' criticism that the changes were not communicated well across the diocese, Higgins stated that "Bishop Holley is always attentive to the needs of the 40 parishes which make up the Diocese of Memphis."

The bishop also was criticized for bringing in a Canadian priest to be his vicar general, Msgr. Clement J. Machado, rather than choosing a vicar general from among the priests of the diocese. Local clergy raised questions about whether proper church procedures had been followed for Msgr. Machado's transfer to the diocese. The priest resigned from the post some weeks later and returned to Canada.

The complaints about Bishop Holley prompted the Vatican -- through the nunciature in the U.S. -- to assign two U.S. archbishops to make an apostolic visitation this summer to the diocese, Archbishops Wilton D. Gregory of Atlanta and Archbishop Bernard A. Hebda of St. Paul and Minneapolis.

Citing two unnamed sources in the diocese, The Commercial Appeal daily newspaper reported that Archbishops Gregory and Hebda visited the diocese June 18-20 for a fact-finding trip. They reportedly talked to between 40 and 50 clergy and a number of laypeople.

No one from the Memphis Diocese or the prelates' respective archdioceses would comment on the visitation when CNS asked for confirmation it had taken place.

Before his appointment as bishop of Memphis, Bishop Holley was an auxiliary bishop of the Washington Archdiocese for 12 years. There he served as vicar general and was a member of the archdiocesan college of consultors, priest's council, seminarian review board, administrative board. He was chairman of the college of deans, which oversees the 14 deaneries in the archdiocese.

Bishop Holley was born in Pensacola, Florida. He attended Theological College in Washington and completed his seminary studies at St. Vincent de Paul Seminary in Boynton Beach, Florida. He was ordained as a priest of the Diocese of Pensacola-Tallahassee in 1987.

In Florida, then-Father Holley served as a parochial vicar and later administrator of St. Mary Parish in Fort Walton Beach. He also served at St. Paul and Little Flower parishes in Pensacola. He served as spiritual director of the Serra Club of West Florida, which promotes vocations to the priesthood, and for many years was a member of the Joint Conference of the National Black Catholic Clergy Caucus.

His ordination as a bishop to serve the Washington Archdiocese took place in 2004 at the Cathedral of St. Matthew the Apostle. He chose "His Mercy Endures" as his episcopal motto, after having developed a great devotion to St. Faustina and her message of Divine Mercy during his years as a priest.

He has served on a number of committees for the U.S. Conference of Catholic Bishops, including the committees on Laity, Marriage, Family Life and Youth; Pro-Life Activities; and National Collections. He has also served on committees for communications and cultural diversity and subcommittees on Africa, African-American Catholics, Hispanic affairs and migration.

There are 42 parishes and three missions in the Memphis Diocese, which covers 10,682 square miles. Catholics number over 65,000, or 4.5 percent of the area’s total population.