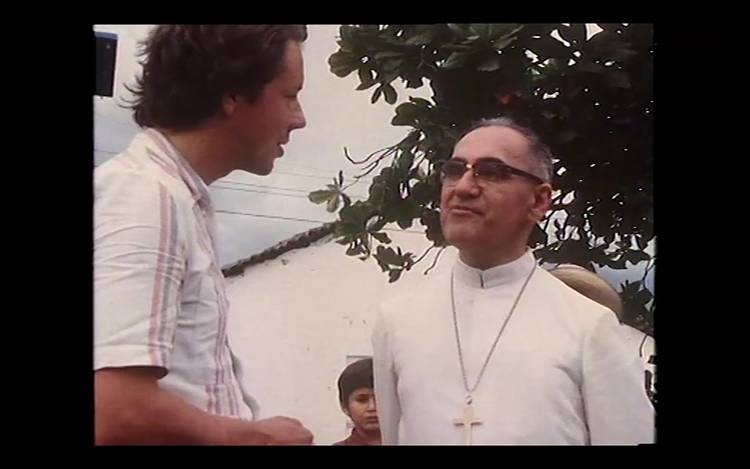 Blessed Oscar Romero is seen speaking to a Swiss journalist in this screen grab from 1979. (CNS photo/Oscar Romero: A Shepherd according to the heart of Christ)

VATICAN CITY (CNS) -- A new documentary about Blessed Oscar Romero, featuring a rare interview with him, revealed the martyred archbishop's thoughts regarding accusations that he became too progressive.

Salvadoran Cardinal Gregorio Rosa Chavez shared an excerpt of the interview with journalists during a briefing Oct. 11 at the Vatican press office.

"We waited 40 years to find out what Archbishop Romero said."

"We had never heard this before because it was dubbed in German. We waited 40 years to find out what Archbishop Romero said," Cardinal Rosa Chavez said.

The cardinal, who directed the documentary "Oscar Romero: A Shepherd According to the Heart of Christ," explained that in 1979 a Swiss television crew visited the future saint and asked to follow him for one week.

Blessed Romero's response to a question regarding the fact that he "changed from a conservative bishop to a progressive bishop," he said, is a question "that has caused so much debate" and is now answered by the slain archbishop himself.

"I don't think there has been a substantial change," Archbishop Romero said in the interview. "It is more of an evolution in accordance with the circumstances. My goal as a priest has always been to be faithful to the vocation, to the service of the church and the people."

Although the Salvadoran archbishop did not view his support of the poor and the oppressed as support for a political ideology, rumors abounded both in the halls of El Salvador's right-wing government and in the corridors of the Vatican.

In his diary entry following the meeting, Blessed Romero said that he was "worried to see how much the negative reports of my pastoral work had influenced the pope."

However, Cardinal Rosa Chavez explained, after Blessed Romero's martyrdom, St. John Paul realized the inaccuracy of the reports. The pope even visited the slain archbishop's tomb in 1983 against the wishes of the Salvadoran government and local church leaders.

"The pope went to the Blessed Sacrament and then to Romero's tomb where he prostrated in prayer; I was very close to him and the pope said, 'Romero is a saint,'" the cardinal recalled.

The documentary featured footage of the Salvadoran archbishop visiting El Paisnal, the hometown of Jesuit Father Rutilio Grande and the church where he was buried alongside two local farmers who were killed with him.

Father Grande, a close friend of Blessed Romero, was known as a champion of the poor and the oppressed at a time when El Salvador was on the threshold of a civil war, a war that eventually killed over 70,000 people.

Father Grande's death in 1977 at the hands of El Salvador's notorious death squads is believed to have been the inspiration for Archbishop Romero to take up the mantle of defending the poor.

In his interview with Swiss television, Blessed Romero said that there "has never been such a violent circumstance as it was for me when I arrived at the archdiocese. When I arrived, they were expelling priests and the month after my arrival, they killed Father Rutilio Grande."

Standing in the church where his dear friend was laid to rest, Archbishop Romero prayed, "May the blood so sorrowfully shed of this dear brother, Father Rutilio, together with his two farmer friends -- Nelson Rutilio (Lemus) and Manuel (Solorzano) -- signify a fruitful wellspring that continues to bear fruit."

Blessed Romero admitted he did not experience a "fear that inhibits me, that prevents me from working."

Blessed Romero told the Swiss journalist that it was not only Father Grande's death that pushed him to become more outspoken, but also "the need to defend the church that is so persecuted to the point of murdering priests."

Both reasons, he said, "push me toward a more powerful ministry in defense of the rights of the church and the rights of men and women."

Asked if he was scared that he would be killed like his friends, Blessed Romero admitted that while he did have a "prudent concern" about threats to his life, he did not experience a "fear that inhibits me, that prevents me from working."

"I feel that while I walk along fulfilling my duty, while I go around freely being a shepherd to the communities, God is with me," he said. "And if something happens to me, then I am prepared for everything."