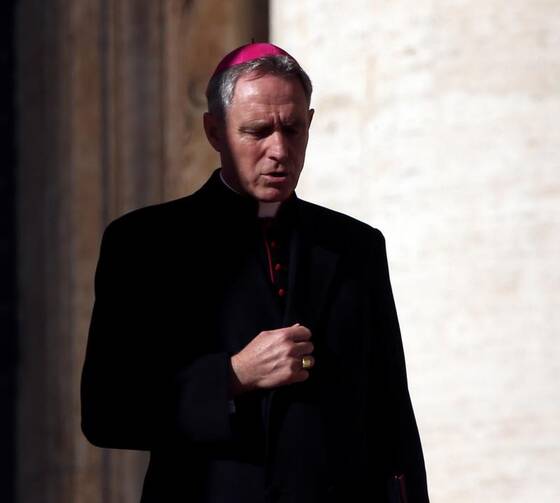 Archbishop Georg Ganswein, prefect of the papal household, is pictured in a 2016 photo at the Vatican. (CNS photo/Stefano Rellandini, Reuters)

ROME (CNS) -- The concern of now-retired Pope Benedict XVI and the promises made by the majority of church leaders were not able to stop the evil of clerical sexual abuse, which has been the 9/11 of the Catholic Church, the retired pope's personal secretary said.

Even if the "catastrophe" of abuse does not fall on one particular date, but rather extends over "so many days and years" and has claimed "countless victims," Archbishop Georg Ganswein said, today, in the wake of the Pennsylvania grand jury report, "the Catholic Church is looking -- full of dismay -- at its own 9/11."

Speaking during a book presentation in Rome Sept. 11, Archbishop Ganswein, who is also prefect of the papal household, said, "I don't mean to compare the victims or the number of abuses concerning the Catholic Church with the 2,996 innocent people in all who lost their lives Sept. 11."

"No one, so far, has attacked the church of Christ with airlines full of passengers. St. Peter's Basilica is still standing" as are other symbolic churches in the Western world, he said, according to news reports.

"And yet, the news coming from America that recently informed us about how many souls have been irreparably and mortally wounded by priests of the Catholic Church, gives us a message (that is) even more terrible than if there had been news that all the churches in Pennsylvania had suddenly collapsed together with the Basilica of the National Shrine of the Immaculate Conception in Washington," he said.

Having mentioned the basilica, the archbishop said he was reminded "as if it were yesterday" of when he accompanied Pope Benedict there April 16, 2008. The pope, who also visited New York and Baltimore on that trip, gave a lengthy speech to the nation's bishops at the shrine.

How are you marking the 15th anniversary of 9/11?
The Editors

In the portion of his talk dedicated to the sexual abuse of minors, Pope Benedict "tried poignantly to shake the bishops assembled from all over the United States," the archbishop said.

Quoting from the pope's text, the archbishop recalled how the pope spoke about "the deep shame" caused by the sexual abuse of minors by priests and "the enormous pain that your communities have suffered when clerics have betrayed their priestly obligations and duties by such gravely immoral behavior."

But that talk, Archbishop Ganswein said, was "evidently in vain, as we see today. The cry of the Holy Father did not succeed in holding back the evil nor did the formal assurances and the verbal commitments by a great part of the hierarchy."

Archbishop Ganswein has worked with the retired pope since 1996, first serving on the staff of the Congregation for the Doctrine of the Faith and later becoming then-Cardinal Joseph Ratzinger's personal secretary in 2003.