Religion is still more vibrant in the U.S. than in Europe—but there are striking exceptions to the cliché 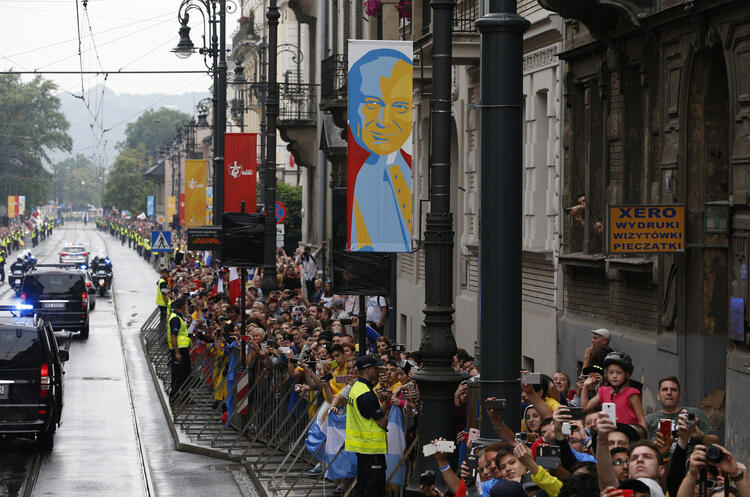 It is something of a cliché to contrast the religiousness of the United States with the godlessness of Europe. There is a great deal of truth to this observation but also much qualification. This is made clear in my recent report “Europe’s Young Adults and Religion,” recently published in advance of this fall’s Synod on Youth.

Generally speaking, it is not exactly a golden age for old-time religion. Nevertheless, U.S. religious belief has proven, if no longer buoyant, then at least more resilient than in other modernized, affluent countries. In 2016, 78 percent of Americans claimed a religious affiliation to the General Social Survey, compared with just 47 percent in a similar survey in Britain. At the same time, 25 percent of Americans claimed to attend religious services at least once a week; in Britain, only 14 percent did.

In 2016, 78 percent of Americans claimed a religious affiliation to the General Social Survey, compared with just 47 percent in a similar survey in Britain.

But the United States is a large and diverse place, with a wide range of religious climates (Portland, Oregon, simply feels different from, say, Atlanta) and even micro-climates (think of Austin in the middle of Texas). References to “American religion,” as though it could be plotted on a single line on a graph, are misleading. The same is true of Europe. Certainly, Europe has plenty of countries with large numbers of “nones” and few practicing Christians. Britain is by no means the best (or worst) example. For all kinds of historical, political, ethnic and economic reasons, Europe exhibits a great deal of religious diversity.

“Europe’s Young Adults and Religion” was jointly published by St Mary’s University—Britain’s biggest Catholic college—and the Institut Catholique de Paris. We analyzed 2014-16 data from from the highly respected European Social Survey, focusing on the religious affiliation and practices of 16- to 29-year-olds in 21 European nations and in Israel.

The highest share of young adults who said they had no religious affiliation was 91 percent in the Czech Republic, followed by 80 percent in Estonia and 75 percent in Sweden. In Britain, the figure was 70 percent. Compared to these European countries, the young adults of the United States looked almost devout. Again according to the General Social Survey, only 31 percent of 18- to 29-year-olds identified as having no religion, somewhat less than in Austria (37 percent). In only three nations in our survey were “nones” less common than in the United States: majority-Catholic Lithuania (25 percent), majority-Catholic Poland (17 percent) and Israel (1 percent). Interestingly, Lithuania is only 240 miles south of “none”-dominated Estonia, which has a Lutheran history.

While there was not so much variation in the United States, at the regional level we can see less uniformity. Forty-eight percent of young adults in the West North Central region—essentially the classic Midwest states, from Kansas and Missouri up—identified as nones. That was about the same proportion as in Germany, Switzerland or Russia. At the other extreme, the proportion of nones in the South Atlantic region (the Eastern Seaboard, more or less, from Delaware down) was 22 percent. In European terms, that was only a little more than in Poland.

Similar variations show up when we look at religious practice. Again, the Czech Republic was the most secular society according to the survey data, with only 3 percent of 16- to 29-year-olds attending religious services at least weekly and 70 percent saying they “never” attend. In Britain, by comparison, 6 percent attended church weekly, and 59 percent said they “never” attend. (Among Catholics in Britain, the figures were 11 percent and 18 percent, respectively.) This ratio was similar in Belgium, France, the Netherlands and Spain, though among Catholics in these countries the percentage who “never” attend topped out at 39 percent, in Spain.

The Czech Republic was the most secular society according to the survey data, with only 3 percent of 16- to 29-year-olds attending religious services at least weekly and 70 percent saying they “never” attend.

Meanwhile, 17 percent of young Americans said they attend religious services at least weekly. (There is no recent comparison for Catholics of that precise age group, but according to Gallup this past April, 25 percent of Catholics ages 21-29 attend Mass at least weekly.) Concerning though that figure might be for parents and pastors, it compares favorably to all but three countries covered in our report: Israel (26 percent) and majority-Catholic Poland (39 percent) and Portugal (20 percent). Notably, the United States was at least as religiously observant as Ireland (where 15 percent overall attended religious services at least weekly, and 24 percent of Catholics attended Mass weekly). Whether that tells you more about Ireland or the United States, especially in light of recent events, you can judge for yourself.

Banjo-pickin’ for Jesus: the bluegrass music of “The Hillbilly Thomists”
Stephen Bullivant

Again, there are regional differences in the United States. A relatively high 27 percent of young adults in the region comprising Texas, Oklahoma, Louisiana and Arkansas said they attend religious services at least weekly. Were those states to secede and join the European Union, only the Poles could boast more churchgoing zeal. Meanwhile, around 40 percent of young adults in both the West North Central region (see above) and the eight interior Western states of the Mountain region said they “never” attend. With those kind of numbers you might as well be in Germany, Switzerland, Finland or Estonia.

In general terms, then, “America” is indeed more religious than (most of) “Europe.” There are certainly exceptions to that rule: Poland or Portugal makes, say, Colorado look positively godless. Nevertheless, compared to the normalness of nonreligion across much of Europe—where, as I recently told the Guardian, “Christianity as a default, as a norm, is gone”—the United States looks set to remain if not a city on a hill, then at least a town on a fair-sized knoll, for a good while longer.

Stephen Bullivant is Professor of Theology and the Sociology of Religion at St Mary’s University in London. The report “Europe’s Young Adults and Religion” can be downloaded for free from the Benedict XVI Centre website.

I have traveled over most of the United States and attend Sunday Mass at about 20 different churches during the year. Almost none are close to full. Most about 50% if that. 30 years ago they were mostly full. Nearly every local parish has cut Masses. Full at Christmas and Easter and a few weeks before Easter.

Read the "Strange Death of Europe." What is happening in Europe is coming here. Anti religion pseudoscience has won. There is no longer any belief.

I have read Douglas Murray's prophetic book, The Strange Death of Europe", and must point out that that "death" is as much suicidal as it is the result of hordes of Muslims invading European culture. Not only are white western Christians giving up their faith but they are also so full of self guilt that they are actively allowing themselves to be overrun by invasions of migrants in order to atone for their colonialist sins. The Christian foundation of western civilization is rapidly being eroded from within and without.

The best thing to happen to Europe is the "hordes of Muslims". Europe has a declining birth rate and needs to have a population growth to be vibrant . They need young workers to replace the older ones. Muslims are not eroding Christianity in Europe. If Europeans are losing their religion it has nothing to do with Muslim keeping their faith.
Migration of peoples is part of world history ; always has been and always will be. The nation states of Europe if you go back far enough are made up of migrant groups. The nation states of Europe cannot thrive without influxes of people. The US thrives because of immigration, so too will Europe because of immigration. That includes of Muslims. Secularism erodes religiosity. This is why some Muslim majority countries oppose secular democracy and want to remain theocracies. [ Not a coincidence that under the Soviets , the oppressed Polish people clung to their religion. Their religiosity has eroded somewhat under freedom and democracy] .
It's not merely colonial guilt that has Europeans accepting influxes of people but rather the same reason we accept influxes of people from Central America today. These people are fleeing violence and even wars and it is the right thing to do !If you believe this about Central America immigrants but wont accept that Muslim and African migrants and refugees likewise should be granted refuge if fleeing violence or even economic destitution, then you are withholding empathy including the right to live, from people based on nationality, religion or group identity. That is racism and bigotry most evil.

We Catholics are not very good at making our faith appealing to young people. We expend little effort in keeping them in church. Religion tends to be presented as a set of rules when it is more reasonably understood as a way of thinking about God, life, and life's quandaries.