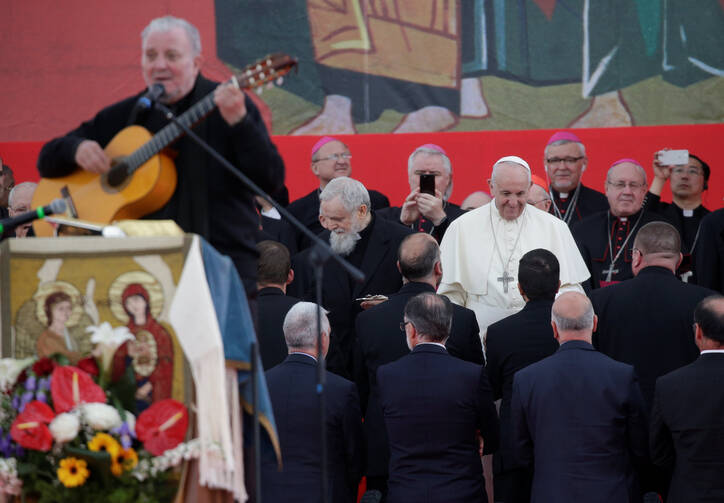 Pope Francis greets people during a gathering of the Neocatechumenal Way at Tor Vergata, a field on the edge of Rome, on May 5. Some 100,000 members of the movement welcomed the pope as they celebrated the 50th anniversary of the movement. Also pictured is Kiko Arguello, co-founder of the Neocatechumenal Way, playing guitar. (CNS photo/Max Rossi, Reuters)

Pope Francis would not have known in advance that the former archbishop of Guam, Anthony S. Apuron, would be on stage with him in Rome on May 5 at the Te Deum celebration of the 50th anniversary of the founding of the Neocathecumenal Way, one of the biggest pastoral and spiritual movements in the church today, if at times a controversial one.

A Vatican source (who asked not to be identified) explained that whenever the pope is invited to such a large public event he does not see the guest list in advance nor is the list checked by Vatican officials, as they trust the organizers of these gatherings to act in a responsible way. Archbishop Apuron had been condemned by a Vatican tribunal on March 16. He left Guam in 2016 after child molestation charges against him surfaced, including a more recent allegation of abuse from his own nephew.

A Vatican source said that the organizers “should have known better” than to invite Archbishop Apron.

At the celebration at Tor Vergata, a field outside of Rome, there were many cardinals and bishops from all over the world, including Archbishop Apuron—who has been one of the most friendly bishops to the movement in the Pacific—as well as around 100,000 people from some 130 countries. All the attendees were invited by the Neocathecumenal Way organizers. The movement began in Spain in 1964 and claims more than one million adherents in 6,000 parishes worldwide.

The Vatican source, however, told America that the organizers “should have known better” than to invite Archbishop Apuron, given that a Vatican Tribunal had found him guilty of some of the accusations against him. “With friends such as these, the pope has no need of enemies,” the source remarked.

After its verdict was reached, the Vatican Tribunal’s public statement did not identify which offenses the archbishop had been found guilty of, but it said it imposed on him “the penalties of privation of office and prohibition of residence” in the Archdiocese of Agaña in Guam. He was not dismissed from the clerical state and has the right to appeal the sentence. U.S. Cardinal Raymond L. Burke, a noted canon lawyer, was the presiding judge in the canonical investigation of Archbishop Apuron.

The archbishop insists on his innocence and has begun the appeal process. That means his penalties “are suspended until final resolution.” Nevertheless, the source said that under the circumstances the archbishop “should have kept a low profile” and not attended such a public event.

Members of the Neocathecumenal Way have been criticized for insensitivity as they have carried out evangelical work, and some of its liturgical practices have been challenged. Before sending 34 teams of Neocatechumenal Way members off on new missions, including to poorer parishes on the "peripheries" of Rome, Pope Francis on May 5 reminded its assembled members about the obligation of every Christian to evangelize, and he gave notes on how it should be done. He told the thousands gathered at Tor Vergata that sharing the Gospel means being a witness to love, responding to questions and patiently walking alongside people, not dictating how and when they take the next step.

After the verdict was announced in March, Archbishop Michael Byrnes, Archbishop Apuron’s successor, publicly apologized on behalf of the whole archdiocese for the “grave harm” caused by Archbishop Apuron. Archbishop Byrnes, who has been leading the Archdiocese of Agaña since 2016, said a new chapter of humility, repentance and healing has opened for the Catholic Church in Guam following the verdict. Archbishop Apuron is among the highest-ranking church leaders to have been tried by the Vatican for sexual offenses.

“We hang our heads in shame for the grave evil one member inflicted upon others, in this case the most vulnerable,” Archbishop Byrnes said during a news conference in Guam March 18. The archdiocese, in preparation for settlements in scores of abuse cases dating back decades, is preparing for the sale of a number of church properties.