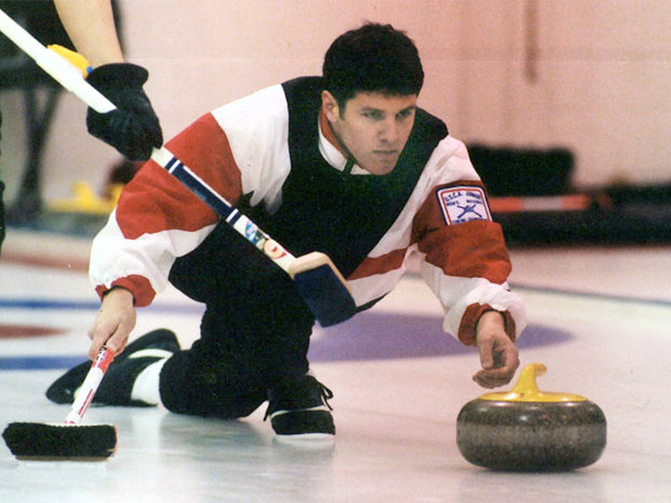 (RNS) — When the men’s and women’s Olympic curling teams take to the ice this week in Pyeongchang, they can count on some friends in high places.

The sport, which involves a four-person team sliding a “rock” across ice and sweeping with a broom to guide its path, confounds the unfamiliar but has attracted some famous fans. Serena Williams, Mr. T and NFL superstar J.J. Watt all have tweeted about the sport as faster-paced mixed doubles curling made its Olympic debut last week.

They join the Rev. Andrew Roza, a former Olympic hopeful turned vocations director for the Archdiocese of Omaha, who said he’ll be talking to God about the Team USA curlers during this year’s Winter Olympics.

“I’ll be praying for them. I don’t hesitate to ask — why not?” Roza said, laughing. “There’s nothing wrong with asking God. He can say whatever he wants, but he tells us to ask for what we want.”

Roza, 37, and his teammates finished fourth in the Olympic trials for the 1998 Winter Games, which took place in Nagano, Japan. There, only the top U.S. team competed.

Even then, at 17 and a junior in high school, he felt the calling to the priesthood. But a question nagged: Who knows what he could do with another four years of training? He’d be a junior in college when the next Winter Olympics rolled around.

“At that point I made the commitment to give it one more shot. The understanding was whenever that shot was over, I’d go on to seminary and kind of move on with life and maybe the more serious questions,” he said.

Roza, 37, and his teammates finished fourth in the Olympic trials for the 1998 Winter Games, which took place in Nagano, Japan.

For the next four years, he focused on curling and the 2002 Winter Games in Salt Lake City.

But when his team failed to qualify for that Olympics, he felt at peace hanging up his broom. He had three U.S. junior championship victories under his belt.

At the time, U.S. Curling Association chief operating officer Rick Patzke told the Calgary Herald, “It was a little bit of a shock to see him walk away.”

It wasn’t as if Roza was too old to give it yet another try: Several curlers on Team Shuster — this year’s men’s Olympic team, named for its skip, or captain, John Shuster — are in their mid-30s. But Roza said he’s happy to play a different position, cheering for many of the same athletes he once competed with or against, including Tyler George, the vice skip of Team Shuster.

Roza started curling when he was growing up in Omaha, following his older brother, who was introduced to the sport by a friend whose family had played for generations in Wisconsin. When Roza was in seventh grade, a spot opened up on a competitive team.

Curling originated on the frozen lochs and ponds of Scotland and continues to be popular in Sweden, Norway and especially Canada. Curling clubs can be harder to find in the United States — USA Curling lists about 165 member clubs in 43 states — but is especially popular in states with similarly wintry climes such as Wisconsin and Minnesota, the only states from which Team USA members hail this year.

Roza said he’s happy to play a different position, cheering for many of the same athletes he once competed with or against.

Roza remembers learning to curl on the flooded floor of the livestock building at the since-demolished Ak-Sar-Ben racetrack and coliseum as a member of a small club of about 200 people who “became like extended family.”

The competition appealed to him, he said, as did the excuse to travel and miss some school. So did the social aspects of the sport.

“There are more important things than whether you win or not,” he said.

“It doesn’t always feel that way, but that’s a part of curling culture. The relationships matter the most. You want to win, but at the end of the day it’s about the people.”

At the same time, he was attending Catholic schools, part of a practicing Catholic family and the youth group at his parish. The retreats he attended through Creighton Preparatory School, a Jesuit high school, were especially important, he said, calling them “my best experience of humanity.”

“I knew when I was playing that it wasn’t what I was supposed to do with my entire life. I just had that intuition or feeling I really wanted to work for God more intentionally and more purposefully,” he said.

He attended the Pontifical College Josephinum in Columbus, Ohio, and the North American College in Rome. He taught at a Catholic high school, where he also coached soccer, and spent a year as an associate pastor in a parish before moving into his current role in the Archdiocese of Omaha.

This fall, things came full circle when two major curling events came to Omaha — Curling Night in America and the Olympic team trials. Roza even got to throw a few rocks with Team Shuster in August, he said.

The priest said before the opening ceremony that he’d tune in to watch the Olympics, but he didn’t have any “extravagant big watch party plans” with others in the diocese or with students at the St. John Paul II Newman Center at the University of Nebraska at Omaha, where he lives. If Team USA does well, he said, he may flip on a game for the students.

And he has no regrets.

“I wouldn’t trade it for the world.”

Or, presumably, an Olympic medal.