Pope Francis: Buddhists and Catholics must unite against “intolerance, prejudice and hatred” 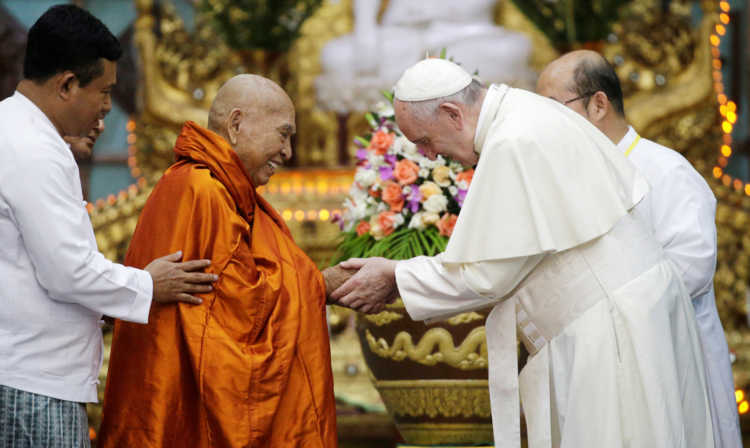 Pope Francis greets Bhaddanta Kumarabhivasma, chairman of the supreme council of Buddhist monks, during a Nov. 29 meeting with monks of the council at the Kaba Aye Pagoda in Yangon, Myanmar. (CNS photo/Max Rossi, Reuters)

Pope Francis called on Catholics and Buddhists in Myanmar “to be united” in order “to heal the wounds of conflict that through the years have divided people of different cultures, ethnicities and religious convictions.” He reminded them that to achieve this unity it is necessary “to surmount all forms of misunderstanding, intolerance, prejudice and hatred.”

That was his core message in his address to the leadership of the state committee that oversees and regulates the 500,000 Buddhist monks in Myanmar, a majority Buddhist country.

To achieve this unity it is necessary “to surmount all forms of misunderstanding, intolerance, prejudice and hatred.”

He delivered his speech at the Kaba Aye Centre (“Kaba Aye” means “World Peace”), a large hall built in 1952 to institutionalize Theravada Buddhism as the state religion. The building is overlooked by the magnificent golden Kaya Aye Pagoda, the most revered Buddhist temple in this country and one of the most revered in southeast Asia.

His audience was composed of the 47 high-ranking Buddhist monks that form the state-organized committee that oversees the country’s Buddhist monks (the Sangha). The committee was set up by the military government in 1980, in Yangon, to consolidate its control over the monks at the national, state and village level. It laid down rules to require monks to register with the government and get identification cards. In theory, this committee monitors violations of the Vinaya, the regulatory framework of Theravada Buddhist monks, but it has been used to curtail the involvement on monks in secular affairs, as happened during the Saffron Revolution in 2007 when the monks openly challenged the military rulers.

Francis’ audience included the chairman of the committee, the Most Ven. Bhaddanta Dr. Kumarabhivamsa, who welcomed the pope and spoke first in Burmese. They sat facing each other across the hall, with their respective delegations on either side of them. The state minister for religious affairs and culture, Thura Aung Ko, was also present.

Francis hailed the meeting as “an important occasion to strengthen the bonds of friendship between Buddhists and Catholics.”

Speaking in Italian, with immediate translation, Francis hailed the meeting as “an important occasion to renew and strengthen the bonds of friendship and respect between Buddhists and Catholics” and “to affirm a commitment to peace, respect for human dignity and justice for every man and woman.”

Pope Francis told them that today, not only in Myanmar but also throughout the world, “people need this common witness by religious leaders” because “when we speak with one voice in affirming the timeless values of justice, peace and the fundamental dignity of each human person, we offer a word of hope.”

While there have been “injustices, moments of conflict and inequality among peoples” in every age, the pope said, today these difficulties “seem to be especially pronounced.” In the face of these challenges, he said, “we must never grow resigned” because “on the basis of our respective spiritual traditions, we know that there is a way forward, a way that leads to healing, mutual understanding and respect—a way based on compassion and loving-kindness.”

Pope Francis expressed his esteem for “all those in Myanmar who live in accord with the religious traditions of Buddhism.”

Pope Francis expressed his esteem for “all those in Myanmar who live in accord with the religious traditions of Buddhism.” He acknowledged that through the teachings of the Buddha and the dedicated witness of so many monks and nuns, “the people of this land have been formed in the values of patience, tolerance and respect for life, as well as a spirituality attentive to and deeply respectful of our natural environment.”

The pope told the Buddhist monks that “the great challenge of our day is to help people be open to the transcendent” and “to realize that we cannot be isolated from one another.”

But, he said, “if we are to be united, as is our purpose, we need to surmount all forms of misunderstanding, intolerance, prejudice and hatred.” Francis reminded his audience that the Buddha offered guidance to achieving this goal when he said, “Overcome the angry by non-anger; overcome the wicked by goodness; overcome the miser by generosity; overcome the liar by truth” (Dhammapada, XVII, 223). St. Francis of Assisi offered similar guidance in his “instrument for peace” prayer, the pope said.

Pope Francis: “Authentic justice and lasting peace can only be achieved when they are guaranteed for all.”

His emphasis on overcoming divisions and hatred appeared particularly significant because sources say that some monks were among those who have engaged in hate speech that kindles Islamophobia and that a minority of fundamentalist Buddhists in Rakhine state have incited violence against the Rohingya.

Sources told America that one of these monks is Sitagu Sayadaw, a popular, well-known religious figure in Myanmar, who is highly regarded internationally for his philanthropic work. They noted that while he presents himself as a peace builder and uses moderate language when speaking in English, the same is not always true of some of his Burmese language sermons. At times he links Islam to violence and speaks of Myanmar’s Muslims as foreigners in their own country. In a sermon at a military training school on Oct. 30, he seemed to provide justification for killing non-Buddhists. Pope Francis had a private meeting with Sitagu on Nov. 28, after he met the country’s religious leaders; Vatican spokesman Greg Burke described this as part of the pope’s effort to build bridges.

In his address to the Buddhist leaders today, Francis prayed that the wisdom from the Buddhist and Catholic religious traditions would continue “to inspire every effort to foster patience and understanding and to heal the wounds of conflict that through the years have divided people of different cultures, ethnicities and religious convictions.”

The pope again commended the ongoing work of the Panglong Peace Conference and prayed that those guiding this effort “may continue to promote greater participation by all who live in Myanmar.” This, he said, would surely assist the work of advancing peace, security and a prosperity inclusive of everyone

Francis told them that if these efforts for peace and healing are to bear lasting fruit, “greater cooperation between religious leaders will be required.” He assured them that the Catholic Church “is a willing partner” and recalled that last April the country’s Catholic Bishops’ Conference hosted a peace meeting at which leaders of the different religious communities, ambassadors and representatives of nongovernmental agencies took part. The pope said such gatherings “are essential if we are to deepen our understanding of one another and affirm our interconnectedness and common destiny.” Indeed, he said, “authentic justice and lasting peace can only be achieved when they are guaranteed for all.”

Pope Francis concluded by expressing the hope that Buddhists and Catholics in Myanmar “may walk together along this path of healing and work side by side for the good of everyone who lives in this land.” Speaking “on behalf of my Catholic brothers and sisters,” Francis told the Buddhist monks, “I express our readiness to continue walking with you and sowing seeds of peace and healing, compassion and hope in this land.”

Peace and justice needs diplomacy, wisdom and charity to be obtained.
Pope Francis knows what he is doing

Buddhism has a lot to contribute in making the world a better place for all. God bless.