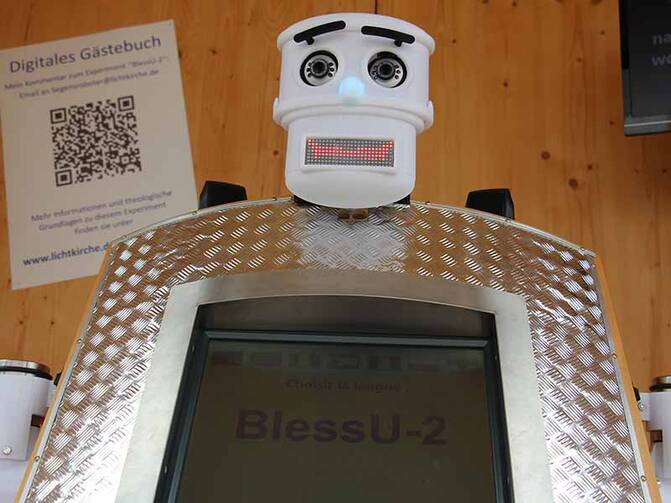 The Evangelical Church in Hesse and Nassau doesn't want to replace human pastors with robots. It just wants to get people talking about the nature of blessing. Photo by Emily McFarlan Miller

WITTENBERG, Germany (RNS) — The woman startled at the blessing.

“Ich habe dich bei deinem Namen gerufen; du bist mein!” In English: “I have called you by name; you are mine!”

It may not have been the words themselves that caused her to jump. The blessing, taken from the biblical book of Isaiah, has comforted many for thousands of years.

It may have been the source of the benediction: A robot built on the body of an ATM machine, whose plastic fingers sprung open and palms lit up as it raised its mechanic hands in blessing, brightening an otherwise gray, rainy day in mid-June.

BlessU-2, the blessing robot, was part of an installation by the Protestant Church in Hesse and Nassau during the summer at the World Reformation Exhibition in Wittenberg, where German monk Martin Luther sparked the Protestant Reformation when he reportedly nailed the 95 theses to the Castle Church door 500 years ago.

And in the same way Luther used the emerging technologies of his day, the church’s robot has sparked conversation and debate; this time, addressing the relationships between humans and machines — and whether they might lead the church to a technological reformation.

BlessU-2 speaks seven languages in either a male and female voice, depending on user preference, and offers four different types of blessings: traditional, companionship, encouragement and renewal. Those are taken from more than 40 Bible verses, according to the church.

The point of the installation was not to replace human pastors with robots like BlessU-2, Vogt said. It was to ask questions: “What is blessing?” “Who can bless?” and “Can God bless through a robot?”

"In the same way Luther used the emerging technologies of his day, the church’s robot has sparked conversation and debate"

But to others, that possibility of robots superseding human clergy doesn’t seem so far-fetched.

And recently published state filings show Anthony Levandowski, the engineer at the center of the legal battle between Uber and Google’s Waymo, has registered a religious organization named Way of the Future to “develop and promote the realization of a Godhead based on Artificial Intelligence.”

The Rev. Christopher J. Benek, for one, welcomes the new metal overlords coming for his job as a pastor at a Presbyterian church in Fort Lauderdale, Fla.

Benek, one of the founders of the Christian Transhumanist Association, is less interested in machines that read blessings or funeral rites, and more interested in what is known as “strong artificial intelligence,” the kind of robots that can think, sense and pass as human.

“That is something that’s going to bring a technological reformation in the church, and I think for the better,” he said.

It’s the kind of A.I. that may become part of us, at a time when our intelligence will become increasingly nonbiological, as Ray Kurzweil has hypothesized. The kind that may still be 100 years away, according to a post by cosmologist Brenda L. Frye on the Vatican Observatory Foundation blog.

“It may not just be that we think of artificial intelligence as other, but it may be closer to integration. It may be we upgrade ourselves,” Benek said.

People don’t flinch at “upgrades” when it comes to a fake tooth or laser eye surgery, so, he asked, why not upgrades that increase intelligence or holiness?

They would flock to something that has “the passion of a Billy Graham and the justice implications of a Martin Luther King and the theological consideration of an Augustine,” he said.

And he wouldn’t mind losing his job as a pastor to such a robot.

“If there’s something holier than I am, I want to learn from that, whatever that is — whether it’s a person or A.I.,” Benek said.

“It may not just be that we think of artificial intelligence as other, but it may be closer to integration. It may be we upgrade ourselves,”

Some religious groups seem more open to the spirituality of robots and other inanimate objects than others, according to Robert Geraci, professor of religious studies at Manhattan College and author of “Apocalyptic AI: Visions of Heaven in Robotics, Artificial Intelligence, and Virtual Reality.”

Buddhists around the world celebrate festivals that honor printing blocks and dolls, and the Dalai Lama has expressed the idea that consciousness could enter a machine, he said. Even Christian churches in the U.S. host events like “the blessing of the bicycles.”

Still, clergy continue to have one of the safest jobs in the sense that the profession has less than a 1 percent chance of automation, according to a 2013 study by Oxford University scholars.

"They didn’t like the church, but they liked the blessing coming from the robot."

Reactions to the blessing robot in Wittenberg have been mostly positive.

One elderly woman received a blessing from the robot only at her grandson’s insistence, Vogt remembered. With tears in her eyes afterward, she told him the robot had shared her confirmation verse, leading her to believe “there must be a bigger thing behind that.”

In one comment scrolling on a screen behind the robot, a visitor shared that he or she liked the robot’s blessing, but preferred human blessings — something the church also offered each day in its mobile LichtKirche, or Church of Light — a sort of church on wheels.

Some repeat visitors have turned down Vogt’s offer to bless them himself. They didn’t like the church, they told him, but they liked the blessing coming from the robot.

Who's afraid of transhumanism? (We all should be)
John J. Conley, S.J.
“We never thought of replacing a pastor by a robot,” Vogt said.

“It’s really an experience — an installation to make people talk about it, and that’s what happens.”