Who is St. Peter Claver? 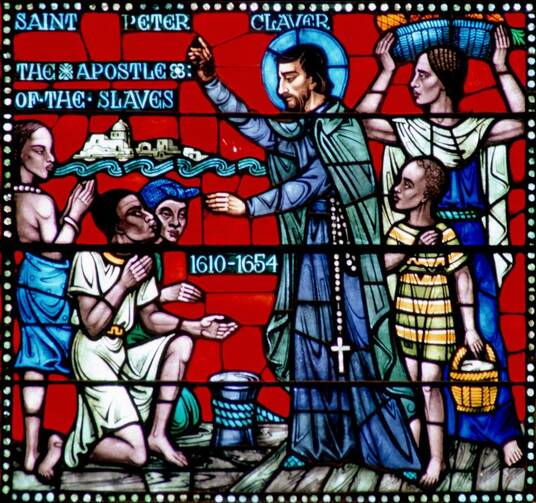 On Sept. 10, 2017, Pope Francis will visit the shrine of St. Peter Claver in Cartagena, Colombia. While he is there, he is expected to venerate the saint’s tomb and pray the Angelus.

The pope and the saint share some common traits: both are Jesuits, lived most of their lives in South America and show particular concern for the poor and oppressed.

So, who is St. Peter Claver?

Peter Claver was born into a Catholic family in Spain in 1580 and studied at the University of Barcelona, where he first met the Jesuits. Early in his formation, one of the Jesuit brothers he was close to encouraged him to consider ministry in the “New World,” where Spain had been involved in the slave trafficking of West African people for nearly a century.

After Claver was ordained a priest, he was sent to work with Jesuit Father Alonso de Sandoval, who ministered to enslaved Africans in Cartagena, the hub of Spain’s slave trade, for 40 years. Claver would go on to push the Jesuits to publish Sandoval’s guide to the “races,” languages and religions of West Africa, which missionaries and interpreters used to communicate with the West Africans who were forced into slavery.

One profile of Claver states that when a slave ship arrived in Cartagena, Claver would take his own small boat out to meet the ships, and he would bring the people medicine, fruit, cakes, brandy and tobacco. He prioritized caring for their physical needs first, saying “[w]e must speak to them with our hands, before we try to speak to them with our lips.” He also cared for the many sick and dying people on board the notoriously inhumane slave ships, wrapping them in his cloak or wiping their sweat with his handkerchief.

Claver assured the enslaved people that they had human dignity and that God loved them. He would offer them the sacraments and catechism, and it is estimated that he baptized 300,000 people during his 40 years of ministry. He would visit and continue to care for the people he met aboard the boats, making an annual visit to the plantations nearby, where he would stay in the slave quarters against the wishes of the plantation owners.

Claver’s work as a “slave to the slaves,” as he called himself, met mixed responses among the Spanish in Cartagena. Some people contributed money to his cause; others refused even to enter the churches where he ministered.

Today, too, Claver's life and veneration can be a source of disagreement among Catholics.  While he is held up in most circles as a heroic example of care for the marginalized and suffering, some scholars have questioned the motives behind his modern-day veneration as a saint. For example, Katie Grimes, a professor at Villanova University who authored Fugitive Saints: Catholicism and the Politics of Slavery (Fortress Press, 2017), argues that the way the church celebrates Peter Claver as “the saint of the slave trade” upholds anti-blackness much more than it undermines it, because it suggests that the church was historically fighting racist practices rather than actively participating in them. Instead of searching inside itself for racial heroes, Grimes argues, the church should learn to celebrate the black fugitives who sought refuge outside of it.

James Martin, S.J., editor at large at America and author of My Life with the Saints, still finds Claver a valuable role model and saintly example. "It's unjust to cast St. Peter Claver, who worked tirelessly with the slaves, in a bad light," Father Martin commented. "How many of us would take the risks to do what Peter did? Moreover, there are some holy people who work for structural change—think of someone like Dorothy Day. There are others who concentrate on direct care for those who are suffering—think of someone like Mother Teresa. Peter was more like Mother Teresa. No saint can do everything, but what Peter did, he did heroically. It is also a testimony to his witness that so many people, including African-Americans, still find him a source of holiness."

Claver, who is also considered the patron saint of the Republic of Colombia and of ministry to African-Americans (with numerous African-American parishes in the United States bearing his name), is said to have slept three hours a night and prayed five hours every morning. In addition to his work with enslaved people, he regularly visited and ministered to people with leprosy, the poor, prisoners, merchants and sailors.

Claver survived several disease epidemics in the area but finally fell sick in 1650. He died four years later and was beatified in 1851. He was canonized in 1888 with Alphonsus Rodríguez, the Jesuit who had originally encouraged him to go to South America.

Saint Peter Claver - Pray for us.