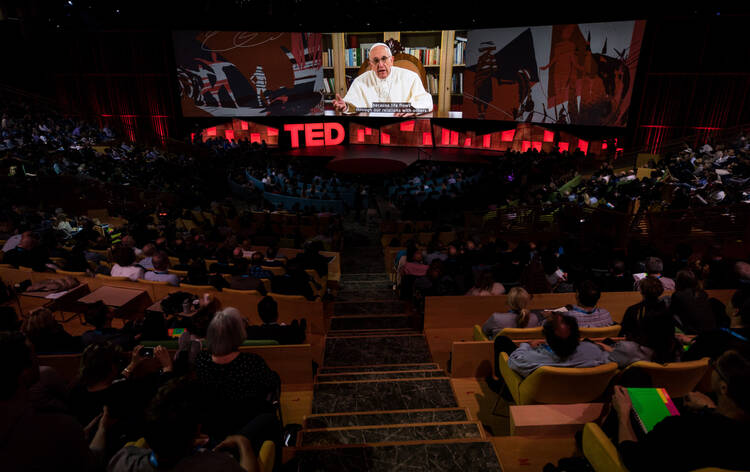 Pope Francis dropped a surprise TED Talk on Tuesday night, urging individuals to work toward a future that lifts up society’s most marginalized, including migrants, the sick, the unemployed and prisoners.

“First and foremost, I would love it if this meeting could help to remind us that we all need each other, none of us is an island, an autonomous and independent ‘I,’ separated from the other, and we can only build the future by standing together, including everyone,” Francis said in a 17-minute video that premiered at the TED2017 conference in Vancouver, British Columbia. It was filmed at the Vatican and kept under wraps until April 25, TED said in a blog post.

TED is a nonprofit organization that hosts conferences around the globe, where many high-profile leaders give talks on a range of topics. This is the first time a pope has participated.

In his talk, Francis talked about the future, the theme of the conference, and said that it is his wish that “the growth of scientific and technological innovation would come along with more equality and social inclusion.”

“How wonderful would it be if solidarity, this beautiful and, at times, inconvenient word, were not simply reduced to social work, and became, instead, the default attitude in political, economic and scientific choices, as well as in the relationships among individuals, peoples and countries,” he said.

“Only by educating people to a true solidarity will we be able to overcome the ‘culture of waste,’ which doesn't concern only food and goods but, first and foremost, the people who are cast aside by our techno-economic systems which, without even realizing it, are now putting products at their core, instead of people,” he continued.

Francis is no novice when it comes to using the Internet to spread his message. He has more than 30 million followers on Twitter, publishing short messages a few times each week in nine languages. Last year, he joined Instagram, gaining more than one million followers faster than any other person in the photo sharing platform’s history.

While extolling the power of creativity in the realm of technology, Pope Francis also reminded those listening to his TED Talk to encounter one another in person.

“Good intentions and conventional formulas, so often used to appease our conscience, are not enough,” he said. “Let us help each other, all together, to remember that the other is not a statistic or a number. The other has a face. The ‘you’ is always a real presence, a person to take care of.”

The pope told the story of the Good Samaritan and highlighted the example of Mother Teresa. He urged listeners not to give into doubts that they cannot meet such high standards.

“Through the darkness of today's conflicts, each and every one of us can become a bright candle, a reminder that light will overcome darkness, and never the other way around,” he said.

The pope also called for a “revolution of tenderness,” repeating a phrase he has used often in his pontificate.

“And what is tenderness?” he asked. “It is the love that comes close and becomes real. It is a movement that starts from our heart and reaches the eyes, the ears and the hands.”

He concluded by appealing to individuals to fight for change in the world.

“The future of humankind isn't exclusively in the hands of politicians, of great leaders, of big companies,” he said. “Yes, they do hold an enormous responsibility. But the future is, most of all, in the hands of those people who recognize the other as a ‘you’ and themselves as part of an ‘us.’ We all need each other.”

How very cool. Pope Francis is my #1 living teacher. He makes himself available regularly and speaks clearly and simply, showing me the way.

Amen. You speak for many people with the same sentiments!