Here's how the church in India is supporting transgender people.

Here's how the church in India is supporting transgender people. 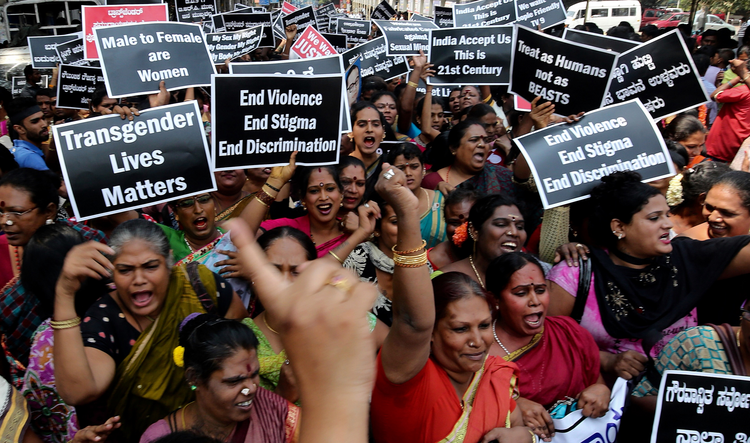 The church in India's Kerala state has formed a group of priests, nuns and laypeople to respond to the pastoral needs of transgender people, reported ucanews.com.

Formed in Cochin under the aegis of Pro-Life Support, a global social service movement within the church, the ministry is significant as it is one of the few outreach programs for the transgender community by the institutional church in India.

"The whole church has a big role to play," said Father Paul Madassey, who is in charge of pro-life support for the Kerala Catholic Bishops' Council. He noted Pope Francis had talked about the need to give "pastoral care to the LGBT community."

"There is an active sex racket from North India eyeing transgender people in Kerala. They are trying to exploit the discriminatory situation they face," Father Madassey told ucanews.com.

India has an estimated 500,000 transgender people. They are often ostracized from their families and—without adequate state support in terms of employment, health and education—end up on the street begging for money or are exploited in the sex trade.

In mid-December, sisters of the Congregation of the Mother of Carmel offered their buildings to form an exclusive school for dropouts among transgender people, considered the first of its kind in the country. The nuns offered their venue after at least 50 building owners declined to let out their buildings, indicating the discrimination prevalent in the society, Father Madassey told ucanews.com.

Earlier this year, Caritas India, the social service wing of the Catholic Church, announced a program to fight such discrimination.

Vijaya Raja Mallika, a leading transgender activist in Kerala, is pioneering a three-month pilot school for transgender school dropouts in Cochin. Mallika said the "church has been very supportive" of their struggles.

"Religion plays an important role in social and behavioral change at the grass-roots level," said Mallika.

Show Comments (
4
)
Comments are automatically closed two weeks after an article's initial publication. See our comments policy for more.
Derrick Weiller
3 years 1 month ago
These truly witness The Love of God, The Life of His Son, and The Holy Spirit. May their example inspire that Spirit across the lands and seas. Hallelujah!
Jim MacGregor
3 years 1 month ago
I wonder if India may not have more pressing problems like temple prostitution, wives dying in fires set by their husbands, starving, caste discrimination, and maybe others.
Derrick Weiller
3 years 1 month ago
James MacGregor: The Sixth Spiritual Work of Mercy counsels us To console the afflicted. It does not rank the various afflictions. It is probably best, then, that we leave the decision as to whom to console to each of us sufficiently compassionate to actually practice the Work, and to not judge others' Good Works as more, or less, worthy.
T. D. Blodgett
3 years 1 month ago
Yes, works of mercy are works of mercy no matter who is being served. That said, I would appreciate it if the author had given a sense of how many people benefit from the Church's program in Kerala state. The article's estimate of 500,000 transgender people in the whole country calculates out to be less than 0.04% of the total population.
Advertisement
More: LGBT / Asia / Social Justice / Spirituality