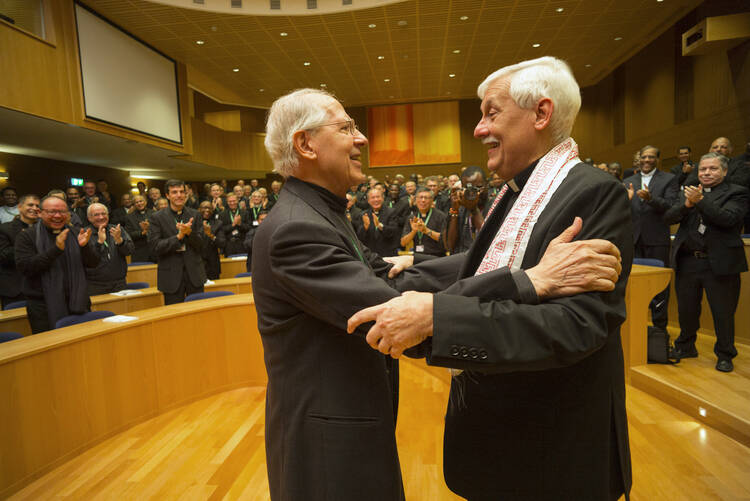 The 36th General Congregation of the Society of Jesus has elected Father Arturo Sosa Abascal, of the Venezuelan Province, Superior General.

Father Arturo Sosa was born in Caracas, Venezuela, on November 12, 1948. He is the Delegate of the General for the Interprovincial Houses and Works of the Society of Jesus in Rome. He is a doctor in political sciences from the Universidad Central de Venezuela and has a license in philosophy from the Andrés Bello Catholic University. Father Arturo Sosa speaks Spanish, Italian, English and understands French.

Alan Fogarty, S.J., the president of the Gregorian University Foundation, has Father Sosa as his superior. This morning he told America that Father Sosa is “man of great faith, a real leader, because he has a vision coming from a strong sense of the history of the Society.  He is a great listener, a man of patience, and believes deeply in discernment, in the tradition of St. Ignatius of Loyola.”

“He is very friendly, very easy to talk to, and is sensitive, and has a deep concern for others. He is a true companion of Jesus,” Father Fogarty added.

During the 35th General Congregation, in 2008, Father Sosa was chosen Counselor General by then-Superior General Father Adolfo Nicolás. In 2014, he joined the curia of the Society of Jesus, in Rome, as delegate for the Society’s Interprovincial Houses and Works. These include the Pontifical Gregorian University, the Pontifical Biblical Institute, the Pontifical Oriental Institute and the Vatican Observatory.

Father Sosa has had a long career in teaching and research. He was a professor and a member of the Foundation Council of the Andrés Bello Catholic University and for 10 years he was the rector of the Catholic University in Táchira. He did most of his research and teaching in political science and published several works about the history and politics of Venezuela.

The official communique from the General Congregation reads:

In accordance with the Formula of the General Congregation (No. 84. 1), the Vicar, Father James E. Grummer, S.J., made the following proclamation:
Since in a complete and legitimate Congregation, after comparing all the votes, a majority of all of them have nominated and elected Reverend Father, Arturo Sosa Abascal, I, by the authority of the Apostolic See and of the entire Society, declare the aforesaid Reverend Father, Arturo Sosa Abascal, elected as General of the Society of Jesus, in the name of the Father and of the Son and of the Holy Spirit. Amen.
At Rome, October 14, 2016.

This story is being updated.

James Martin, S.J., is an author and editor at large for America.

@jamesmartinsj
Show Comments (
3
)
Comments are automatically closed two weeks after an article's initial publication. See our comments policy for more.
jose mathews
6 years 3 months ago
Congratulations and our prayerful greetings, May the Lord lead you elegantly and graciously that His lost sheep may be found out and returned to the Master.
William Rydberg
6 years 3 months ago
Priority #1 is Formation. Pray that they move toward forming Catholic Experts rather than "generalists" or the Society will be sorely ill-prepared for the coming new Evangelization. Welcome Father General... in Christ, Mother of God-Pray for us all...
alex smith
5 years 11 months ago

So sad, this man says we can not know what the words of Jesus means today. So I the Church for 2000 years has just been playing Church I guess. the Jesuits are a disgrace to the Church. Arrogance is the hallmark. He sounds like Satan talking to Eve in the garden. God didn't mean what you think he meant go ahead sin God understands you are following your conscience.