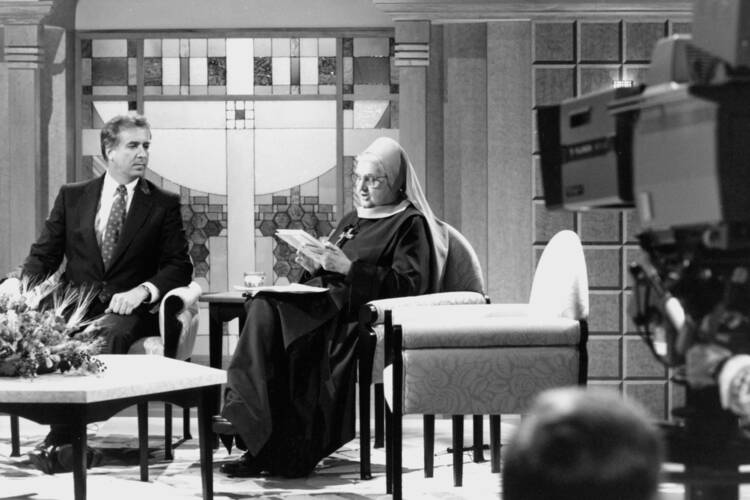 After a number of appearances on Protestant radio and television in Nashville, Tenn., in the early 1980s, I was invited by Deacon Bill Steletemeier, the president of Eternal Word Television Network (EWTN), to be a guest on “Mother Angelica Live.” On Sadie Hawkins Day, Feb. 29, 1984, I drove down to Alabama in my $200 car wearing jeans, a flack jacket, hunting boots and a cowboy hat. I met Mother for the first time in the EWTN parking lot. Her first reaction was to hit her forehead with the palm of her hand, but I promised that I clean up real well.

That first show treated the origin of the canon of Scripture, but with fun and relevance to the whole of our faith, not to mention a few jokes along the way. She saw that I could bring the hay down so the goats could get it and she invited me to make a number of television series over the decades. When she had a stroke on Sept. 11, 2001 (just hours before the plane attacks), she asked me to help her with her weekly shows; her second stroke on Christmas Eve 2001 so disabled her that I have been hosting the live shows ever since.

Four aspects of Mother Angelica stand out for those who have known and loved her these many years. First is her authenticity: She was absolutely no different offstage than on. She said what she honestly thought because she believed it to be true and she did not fear that anyone might dislike her. Her only fear would be to displease the Lord Jesus.

Second, the love of her life was Jesus Christ. She found the culture hollow and superficial, but the infinite source of richness in life flowed from her profound intimacy with our Lord Jesus Christ. She prayed at least four hours a day before the Blessed Sacrament, in addition to Mass and the Liturgy of the Hours. She spoke to Jesus as a friend and as the beloved spouse to whom she had given her vows as a nun. At times she was very angry at him for the severe problems she encountered; sometimes too mad to even look up at the monstrance. Yet she worked through the difficulties and returned to new depths in her relationship with him. She sought only to please Jesus, speak of him to others and bring as many as possible to share her love.

Third, Mother Angelica placed incredible trust in providence. She began EWTN with $200 in the bank and put up the convent as collateral on the first loans. She followed the whispers of spiritual inspirations as they came to her and if doors shut in front of her, she trusted that the Lord would open the right door. She often said, “I have a lot of trust in our Lord; my stomach just doesn’t know it yet,” just as a last minute donation saved a project she had started.

Finally, suffering permeated her whole life. Her father abandoned the family when Rita Rizzo, an only child, was two, and her mother was never mentally stable. Growing up during the Great Depression, her hard life was made more miserable in a one room apartment, often eating only crackers and salami, with rats audible inside the walls. By age 12, she drove a car to deliver the ironing her mother did for other people. She left the Catholic school when a nun mocked her for coming from a divorced family, and she hated nuns, the church and God for over 10 years. After high school (the end of her formal education), she became very ill and, at the urging of neighbors, visited a local mystic, Rhoda Wise. She experienced both physical healing and a renewal of faith and love of Christ that made the world seem hollow to her. She needed to sneak away to join the Poor Clares of Perpetual Adoration in Cleveland, leaving her mother behind, screaming down the street when she discovered Rita’s farewell letter.

As a young nun, she slipped on the floor while using a large floor washing machine and became so injured that the doctors gave her only a 50/50 chance of walking again. Already aware of God’s providence, she promised if she could walk again to open a convent in the southern states in reparation for the sins of racism. Walk she did, though with a brace from her head to her feet, and she began making fishing lures to raise the money to start a convent in north central Alabama.

Once she raised the money for a down payment and bought some land in Irondale, new difficulties arose. The Ku Klux Klan liked Catholics no more than blacks, so they drove by and shot up the house the sisters were using as a temporary convent. Even after they built a proper convent and chapel, a motorcycle gang attacked the place early in the morning, breaking in one door after another as the sisters kept retreating inside. A passerby noticed the motorcycles parked outside the convent and helped chase them away just before they broke down the last door.

The sisters supported themselves by roasting peanuts for the Birmingham baseball park until some local official demanded kickbacks. Adamantly refusing to participate in corruption (“If I’m going to hell, it sure won’t be for a bunch of peanuts”), the sisters acquired a printing press, for which Mother wrote small books that they gave away, asking only for donations. These small spiritual works touched a lot of people, who were generous in sustaining the convent.

The television network grew slowly, from four hours a day for about 2 million homes in 1981, to six hours and, in the late 1980s, 24 hours. In the early 1990s she began a Spanish channel, started shortwave radio in dozens of languages and then moved to satellite radio. By the time of her strokes in 2001, EWTN reached 60 million homes and had 30 radio affiliates. Despite the cocksure predictions that the network would collapse in her absence, it grew more than at any time in its existence: The television station reaches 264 million homes worldwide; 500 radio affiliates operate around the globe; in addition to English and Spanish channels, there is now a German channel and a French one is beginning, particularly for Africa. The network is also broadcast in Polish, Ukrainian, Korean and other languages. The prognosticators of the network’s demise did not account for the fact that Mother’s ongoing prayers for EWTN were stronger than the weaknesses of those of us who follow in her footsteps.

The history of Catholicism in the United States will need to include a section, if not a chapter, on Mother Angelica. Hardly any other woman has had so much influence, except Blessed Teresa of Calcutta. St. John Paul II once said, “Mother Angelica—she is very strong woman.” No physical pain, opposition from inside or outside the church, no overwhelming odds or threats stopped that strong woman in love with Jesus. Following her troubles with cardinals and bishops, St. John Paul personally sent her a monstrance to mark the end of the threats of interdict and other conflicts with the Roman Curia. He knew her strength came from her love of Jesus and he gave a gift to encourage the Eucharistic adoration that nourished and strengthened her. May she rest in peace.

Mitch Pacwa, S.J., is a Scripture scholar and the host of "EWTN Live."
More: EWTN