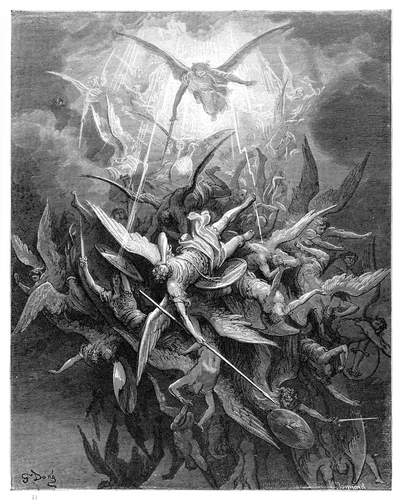 Fall of the angels. (iStock)

One of the most frightening books I’ve ever read was Possessed, the real-life account of an exorcism in 1949, in St. Louis, Mo. It served as the basis of the popular novel and film “The Exorcist.” Performed by some no-nonsense Jesuits, the exorcism, unlike the film, reached its conclusion when the possessed boy (not girl, as in the book and film) was wheeled in a gurney past a statue of St. Michael the Archangel in a local hospital, and a disembodied voice shouted out, “Leave him!” I don’t have the book on hand, and this is not an exact quote, but that’s not the sort of thing that you forget. A few years later on an A&E special, William Halloran, S.J., a Jesuit priest who as a young Jesuit scholastic assisted in the exorcism, broke his silence and spoke openly about what had happened. In 2013, St. Louis University held an event to mark the 40th anniversary of the movie.

When I was reading that book, I heard from a few other Jesuits some hair-raising stories related to exorcisms, including one Jesuit who told me this. He was reading up on exorcisms during his theology studies,  felt a bit queasy, left his room for some fresh air, forgot something and returned to his room only to find…the papers on his desk on fire. By the way, I should point out that this particular Jesuit was the most rational, least gullible, person I could imagine.

So when I read this morning that a Satanic group had erected in Detroit a statue of “Baphomet,” a goat-headed god that has become a kind of stand-in for Satan, I thought of all of what I had read and heard about exorcisms. And I thought: They are playing with fire.

The group claims that they are simply exercising their right to “religious freedom,” and placing the statue there is a counterpoint to those who have erected, or wish to erect, representations of the Ten Commandments and other similar Christian symbols. It’s also clearly a poke in the eye at Christian groups, as was the “Black Mass” that was scheduled, and then cancelled, and then held, at Harvard University last year. It’s hard to discern which motivation is stronger for the group: the desire to push back on religious groups who, they apparently feel, have a monopoly on “religious freedom” in the public square, or the desire simply to troll and stir up trouble. One of my Jesuit friends said that these people are like a “Comment Box come to life,” that is, the worst of snotty comments on religion that pervade the web enacted in real life.

These people have no clue what kind of forces they are dealing with. In my life as a Jesuit priest, and especially as a spiritual director, I have seen people struggling with real-life evil. In the Spiritual Exercises, his classic manual on prayer, St. Ignatius Loyola, the founder of the Jesuits, calls this force either the “evil spirit” or “the enemy of human nature.” Sophisticated readers may smile at this, but this is a real force, as real as the force that draws one to God. Moreover, there is a certain identifiable sameness about the way that the “enemy” works in people’s lives. I have seen this. And, after all, Ignatius’s comments reflect not only his own experience in prayer, but also his experience in helping others in the spiritual life. He was even able to describe some of the ways that the evil spirit works, and this also jibes with my experience: like a spoiled child (wanting to get his way); like a “false lover” (wanting us not to reveal our selfish motivations and plans); and like an “army commander” (attacking us at our weakest point). Pope Francis has also spoken frequently about the presence of evil in the world and of Satan. Again, some may laugh or roll their eyes, but the pope is, again, speaking about something that is not only part of Christian belief, but quite well known among spiritual directors.

In other words, I’m describing not only my belief, but my experience. Evil is real. How Satan fits into this, I’m not exactly sure, but I believe that a personified force is somehow behind this. There is a certain “intelligence,” if you will, and a sameness, as St. Ignatius identified. As C.S. Lewis said about Satan, “I’m not particular about the horns and hooves, but yes I believe.” Me too.

So while the Satanic Temple may smile at their victory, and the mainstream media might chuckle at the “Gotcha” moment vis-à-vis other religious groups (If the Ten Commandments, then why not Satan?) my fear is directed in another place. I recall all those stories I read and heard about Satan, and I think: You have no idea what you’re dealing with.

You are playing with fire.