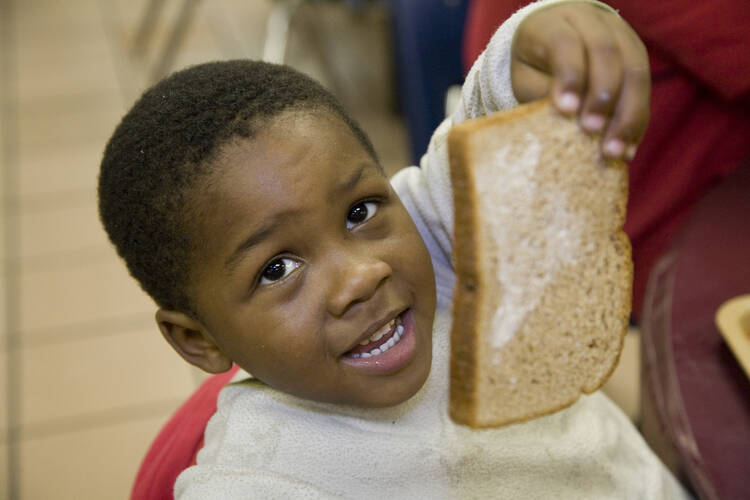 The words of May, my great-grandmother, ring through my head each time I butter a piece of toast. Out of her six daughters-in-law, she singled out my grandmother as the best caretaker she had as she died slowly and painfully from cancer. Once, someone asked her what it was about my grandmother that made her so different from the others. In a tired, weak voice, Great-Grandmother May replied, “She always butters the toast to the edges.”

Almost fifty years later, my grandmother was buttering my toast to the edges. As a little girl, I remember sitting next to her at the kitchen table, eating my toast, thinking about this story, which my mother had told me the first time I tried to butter a piece of toast myself. Now, it is one of the most vivid memories I have of my grandmother.

Perhaps I remember the way she buttered toast because there was so much of it in my childhood. On those cool fall mornings, nothing was more comforting than a slice of Grandma’s toast to go with my eggs. When I came home from school, the house would be filled with the smell of freshly baked bread when Grandma and Grandpa were visiting. She always waited to slice the bread until we were there, and then she would butter it for us, with the butter melting into every slice...right to the edges. When I was sick, Grandma would bring me toast and tea on a tray. She showed me how to dip the toast into my tea so that it would go down more easily when I had a sore throat. But in truth, Grandma’s toast always went down easily, because it was buttered to the edges.

At my grandmother’s memorial service, the minister described her as “Christianity in an apron.” More than twenty years later, this remark still gives me pause. What if Christianity was always clothed in the simplicity and humility of a well-worn kitchen apron? My grandmother’s life was defined by simple, gentle acts of love. But she never performed an act that won an award or made headlines. She did not have the opportunity to go to college or have a career, and many times my grandparents struggled to make ends meet.

The truth is that we live in a world that prizes grand, attention-grabbing actions that bring honor, prestige and wealth. And how tempting it is to focus on the grand gestures. How often we are encouraged to choose the actions that will attract the attention of others, win us recognition, a higher salary, a more prestigious position. But above the din of those seductive voices, I hear my grandmother’s butter knife scraping across the surface of a hot piece of toast until the crisp, dry edges soften. And I remember how little being a Christian really has to do with grand, heroic acts, and how much it has to do with the seemingly little ways in which we care for one another. As Mother Teresa once put it, “It is not how much we do, but how much love we put into the doing.”

How often do we miss these opportunities to love in ways that go to the edges? How often do we look the other way, instead of taking the time for someone who needs an encouraging word, a cup of water, a loaf of bread, a shirt or shoes, a moment of peace? How often do we rush through things, saying “I don’t have time,” when the truth is that we aren’t willing to make the time?

Lent challenges us to make the time. To embrace the most humble acts of loving service to others—not the acts that will win us awards or money—but those which are performed with the tenderness and love that speaks to who Christ was and who he calls us to be. The call is simple. The response, too, should be simple. For it is the small, simple, tender acts—more than any others—that truly change us.

The truth is that it makes a lot of difference whether a pat of butter is slapped in the center of a piece of toast, or spread carefully to the edges. What made my grandmother “Christianity in an apron” was the way she embodied God’s kind of love in the way she cared for others. Taking an extra ten seconds to make sure a piece of toast is buttered to the edges may seem like a miniscule thing, but it made all the difference in the world to Great-Grandmother May and me. My grandmother taught me that God’s love is made visible in the world not in grand pronouncements, but in the simplest things done out of love. And that includes pieces of toast, carefully buttered to the edges.