Synod on Family Closes No Doors; Absolute Majority Is With Pope Francis 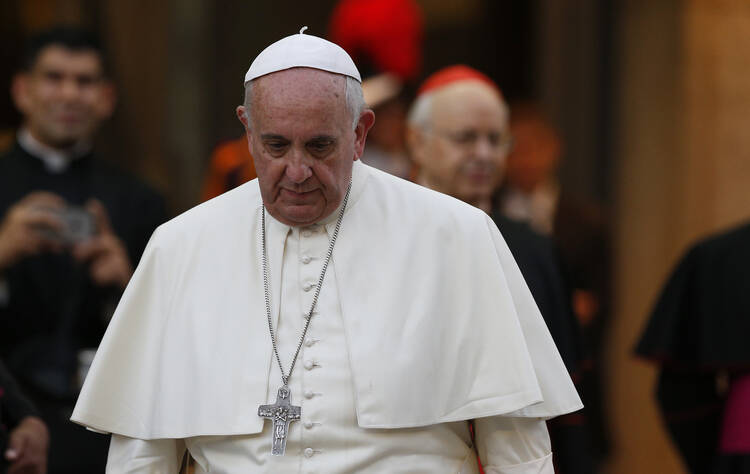 The Final Report of the synod on the family revealed that the synod has closed no doors, all the main questions are still on the table, and an absolute majority of the synod fathers are with Pope Francis, in favor of a Church that like the Good Samaritan reaches out to care for all her “wounded children”.

At the same time it showed clearly that a significant minority totally opposes the admission of the divorced and remarried to the sacraments of reconciliation and the Eucharist, and wants the Church to move with great caution in its pastoral approach to homosexual persons less Church teaching be compromised.

These two important and vexed questions got an absolute majority but not the two-thirds required to have the synod’s approval. But since the Pope has decided to make the whole report public and to send it to the Bishops Conferences worldwide for discussion at the local church level, it is clear that these two issues are still on the table.

All this became clear when Pope Francis, at the end of the two week synod, decided to release immediately the Final Report that contained 62 different paragraphs on each of which the 183 synod fathers present voted on October 18.

Breaking with a 49-year old tradition, in a masterly move in favor of total transparency in the synod process, the Jesuit Pope decided to publish the votes for each of the paragraphs in the 17-page Final Report so that the local churches, the Bishops Conferences worldwide, and the Catholic clergy and faithful can see the level of support or opposition on each question.

Thus, on the controversial question (n.52) regarding the possibility of the admission of the divorced and remarried to the sacraments of reconciliation and the Eucharist, in particular circumstances, after undergoing a penitential path, 104 synod fathers voted in favor of further study of this question, while 74 totally opposed it. (5 abstained).

Again on the question of the divorced and remarried, or persons living together, some favored that these persons be encouraged to make a “spiritual communion”, while others said then why can they not go to the sacramental one. It was proposed to study more deeply the two different forms and their connection with the theology of marriage.  This time the vote was 112 in favor, 64 against (6 abstained).

On the other hand, the synod approved by a vote of 143 to 35  (with 5 abstentions), the proposal for streamlining the process for the annulment of marriages, including the introduction of an administrative way for doing this.

There were many changes, also of a substantial nature, in the Final Report compared with the provisional interim-Report.  These resulted in a positive highlighting of Christian marriage and greater references in Part II of the text to the Scriptures, the Second Vatican Council and the teachings of Paul VI, John Paul II, Benedict XVI and Pope Francis.

These changes were most evident on the question of the Church’s approach to homosexual persons. The Final Report’s paragraph (n.55) that deals specifically with this question differs significantly from what the interim-Report said.  It looks at the question from the perspective of “some families” that “live the experience of having persons with a homosexual orientation with them” and asks what kind of pastoral attention is opportune when faced with such situations, and with reference to what the Church teaches.   It excludes equating same-sex unions with the plan of God for marriage and the family.  Nevertheless, it says “the men and women with homosexual tendencies should be welcomed with respect and gentleness” and adds that “every mark of unjust discrimination should be avoided”.    118 voted in favor, 62 against (3 abstained).

There were many new and positive additions in the Final Report including a strong focus on the plight of children and the drama of families as a result of broken marriages, violence, human trafficking, war, poverty and migration.  There was also a stronger affirmation of the dignity of women, and the insistence of the need of good preparation of couples for marriage, and accompaniment after marriage, the role of education in the families, and “the missionary” role of families.

The Final Report says “the Church is called to act with the tenderness of a mother and the clarity of a teacher, in fidelity to the merciful self-emptying of Christ”.  Like the interim-Report it encourages pastors to identify and take advantage of “the positive elements” in civil marriages and cohabitation, with a view to leading the persons in these situations the Christian ideal of marriage.  It underlines the importance of “accompaniment”, with patience, of people in these and other irregular situations.

At present the text of the Final Report is only in Italian, but it is being translated and should be available in a few days.

It should also be noted that on the morning of the closing day, October 18, the synod also approved an inspiring Message to families and in particular to Christian families.  That text can be found at this site:  http://www.news.va/en/news/message-of-the-synod-assembly-on-the-pastoral-chal

Apart from the Final Report, the most striking feature of the closing session of the synod was Pope Francis’ awesome talk to the plenary assembly which I will report on in a separate article.