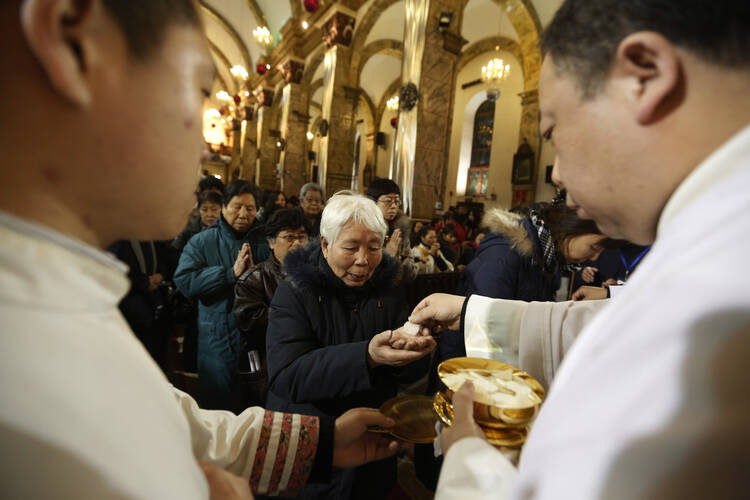 In a stunning about face, Shanghai’s Bishop Thaddeus Ma Daquin has publicly recanted his decision to abandon the Chinese Catholic Patriotic Association (C.C.P.A.), which he had dramatically broken with on the day of his episcopal ordination in July 2012. In a post on his personal blog on June 12, Bishop Ma praised that same association, a state entity that has controlled the life of the Catholic Church in China since the late 1950s. The association is despised by many of China’s Catholics, many of whom continue to secretly maintain their loyalty to Rome. The Holy See does not recognize this association as Benedict XVI stated clearly in his 2007 letter to Catholics in mainland China.

Bishop Ma's sudden decision to recant has sent "shockwaves" through China’s community of some 12 million Catholics, UCANews, the main Catholic news agency in Asia, reported on June 14. The rebel bishop has been under house arrest for the past four years, ever since the day of his ordination as bishop by the late Bishop Aloysius Jin Luxian in St. Ignatius Cathedral in Shanghai. He has been deprived of all pastoral ministry and blocked from succeeding as bishop of Shanghai when Bishop Jin Luxian died in April 2013.

In spite of this punishment, Bishop Ma had firmly refused up to now to give into pressure or enticement to recant or publicly repent his act of defiance. His courageous and public refusal transformed him into a heroic figure for Chinese Catholics on the mainland and farther afield. It also served as an ongoing challenge to other mainland bishops who have been seen as too aligned with state authorities.

Bishop Ma’s public act of civil repentance last Sunday is something the C.C.P.A. and the State Bureau for Religious Affairs in Shanghai have long sought to obtain. The association had been held responsible by Beijing for the bishop’s act of rebellion and suffered great embarrassment for allowing Bishop Ma to publicly disassociate himself from the C.C.P.A.

According to UCANews, he stunned Chinese Catholics on his much followed personal blog when he seemed to reverse his position on the C.C.P.A.: "For a certain time, I have been deceived by others and [said and] made certain wrong words and deeds about the CPA," Bishop Ma wrote on his blog.

Many questions are being asked inside and outside China as to what caused him to recant, but answers are few at this stage. A source told America that while the writing style is his, one part of the text is “rather rude” and quite unlike him.

His public recantation would seem to be only a first step, but what may be the next one is far from clear now. Bishop Ma’s apparent repudiation of his earlier position comes, moreover, at a time when Beijing and Rome are engaged in what appears to be a constructive dialogue with a view to an accord. There is no evidence that the Holy See has had a part in this dramatic decision by China’s best known resisting bishop. One thing is certain, the story has not ended here.

Gerard O’Connell
@gerryorome
Show Comments (
1
)
Comments are automatically closed two weeks after an article's initial publication. See our comments policy for more.
William Rydberg
6 years 3 months ago
It's not as though the Church has never experienced the historic intrigues of prominent persons (an APOSTLE or 2 comes to mind). I believe the term "fifth columnist" long predates the Chinese Cultural Revolution... Pray for the persons that may have imprudently betrayed confidences. Some may now, or may soon be in existential danger should he decide to report... Pray for all concerned, and the conversion of the great Chinese Peoples... in Christ, BLESSED BE THE TRINITY