In San Francisco, A Lenten Examination for Children Goes Awry 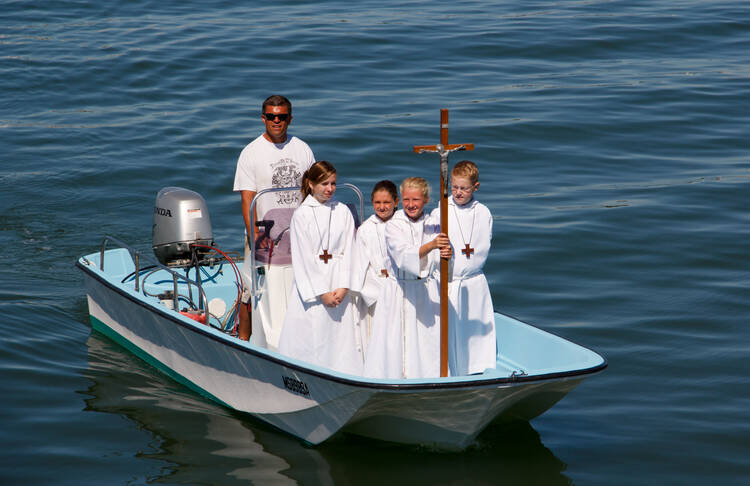 In January Father Joseph Illo, new pastor of Star of the Sea parish in San Francisco, announced that his parish would no longer allow girl altar servers. In explaining the decision on his blog, he told parishioners that while the church has allowed girl servers for the last 20 years, “for the previous 1900 years they were not permitted” and said that when girls are allowed to serve “boys usually end up losing interest because the motivation to excel and compete with male peers is removed in a mixed program.” He also included a photo of female altar servers with the caption, “Does this picture suggest ‘women priests’?”

“I know change is hard,” Father Illo counseled his parish, “But I’m asking you all to trust me on this one. Buying into certain socially-bankrupt principles like co-ed everything does not help us in the long run. We are Catholic, and we think differently than non-believers.”

Now, let’s make the very reasonable assumption that this latest mess was not in fact intentional. I mean, yes, the pastor did say that making everything co-ed was “a socially bankrupt principle,” which feels like a better starting point for a 1970s paranoid conspiracy thriller than for a 21st-century adult man’s take on the world. And he told the Catholic World Report that he felt the attack upon the policy was a coordinated effort to undermine the San Francisco Walk for Life, and also that “an altar boy-only policy is a poke in the eye of the liberal culture of San Francisco” (to which the young women of the universe replied, "Thank you for putting us in the middle of your tired and mean-spirited culture war. Because Jesus.”)

But let’s say it was a mistake, and perhaps not even the pastor’s—although he did write recently that “almost all the confusion about sexual and human identity began with our acceptance of birth ‘control’ fifty years ago.” (And if you’re asking, yes, I do think he just said we wouldn’t have gay people if we weren’t using birth control. Again, if this had Gene Hackman, '70s conspiracy vibe, I’m all in. But pastor of my parish, and mmm, honey maybe we need to shop around.)

Still, we have to ask ourselves—well, two things. First, what was the subsequent conversation like on that playground? I am thinking “Wonder Years” levels of painful discomfort as these poor kids tried to piece together what in fact they had been asked by adults they trusted, and for God’s sake WHY? (Sixth grader Riley Brooks, 11, told the San Francisco Chronicle that at recess they were talking and getting “really grossed out.” Riley, you are not alone.)

And second, why in God’s name is any place still presenting an examination of conscience in these terms? Truly, is it any less appalling to think that a parish might give adults this list of questions? Not because there aren’t sins in there—although my kingdom for the day when we don’t put masturbation in the same category as adultery or abortion—but because of the sick, warped vision of church and confession that it offers. A presentation like this roams far from our modern concept of reconciliation—a moment in which a person can come before God as they are, broken and ashamed, looking for help; instead it’s about being held under a bright light by an examiner way too interested in your sex life, and forced to admit what you’ve done wrong. If you feel better for having done so, great, but the point is that you have to say it.

Seriously, given that kind of list, what adult today would ever want to go confession? Or for that matter go to church?

In October Father Illo wrote that “Running a city parish can be mighty discouraging. The Masses are mostly empty, and those that actually make it to Mass struggle with burdens of advanced age, some in wheelchairs and many with canes.” (And for those wondering, yes, I think Father Illo did just say that parishioners who are older or sick are discouraging, giving him an old school clerical hat trick of groups insulted.)

He’s right, running a parish is hard. There’s always too much to do, and difficult choices, and you’re under a lot of scrutiny, not only from your parishioners but potentially the media and even quippy cranky bloggers. But sometimes the biggest obstacle in our way is actually ourselves. If that’s not an object lesson (for all of us) during Lent, I don’t know what is.

Sorry, we don't always have the best options for illustrations. I've changed it out for one of the few shots at CNS that clearly depicted girl altar servers, albeit in a non-traditional moment.