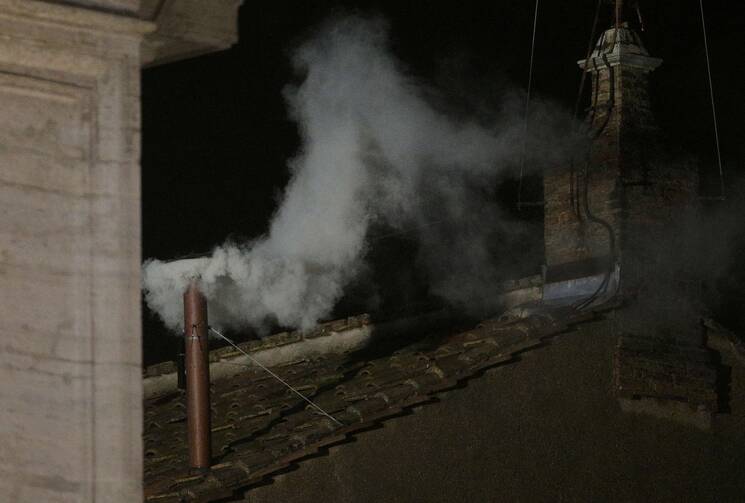 Habemus papam...we'll know who exactly in 40 minutes or so. Watch ABC news to hear commentary from our own James Martin, S.J. Here is the story from CNS:

VATICAN CITY (CNS) -- To the delighted surprise of many, clouds of white smoke poured from the chimney on the roof of the Sistine Chapel March 13, indicating a pope had been elected on the conclave's fifth ballot.

The smoke signal went off at 7:05 p.m. The 115 cardinals gathered to elect the 266th successor of Peter had taken one vote late March 12 and two votes the next morning, resulting in clouds of black smoke.

The Vatican estimated it would be about an hour before Cardinal Jean-Louis Tauran, the top-ranking cardinal deacon, would come out onto the balcony of St. Peter's Basilica and confirm the election with the phrase "Habemus papam" (We have a pope).

The white smoke comes from burning the ballots and cardinals' notes and tallies along with special chemicals to produce abundant white smoke.

But the world did not know the identity of the new pope right away. While the bells of St. Peter's Basilica rang out the news of the election of the new pope, he was inside the Sistine Chapel changing into papal vestments and praying with the cardinals who just elected him.

He also was scheduled to stop on his way to the balcony to pray briefly before the Blessed Sacrament in the Pauline Chapel, where the cardinals began their solemn procession into the conclave March 12.

Cardinal Joseph Ratzinger was elected on the fourth ballot at the conclave in 2005, taking the name Pope Benedict XVI. Unlike eight years ago, however, most people believe there was no clear favorite going into the conclave, which led to surprise that it was over so quickly.

Two stoves, leading to one smokestack, were installed in the Sistine Chapel for the conclave. The ballots and any notes or tallies individual cardinals made are burned in one stove. The other stove burns special chemical cartridges designed to create clouds of black or white smoke for a full seven minutes.

Father Federico Lombardi, Vatican spokesman, told reporters the cartridges producing black smoke have potassium perchlorate, anthracene and sulphur. Those producing white smoke have potassium chlorate, lactose and a pine resin. To improve the draught, making sure the smoke goes up and out instead of filling the Sistine Chapel with smoke as occurred in 2005, the pipes leading to the roof are pre-heated with an electrical current.

Four Catholic students from Duquesne University's Rome campus were in the square awaiting the smoke March 13. One of them, Josh Suhey of Youngstown, Ohio, said, "We're here to see the pope and be part of history."

Asked about the cardinals using smoke to communicate with the outside world, another student, Concetta Staltari from Pittsburgh, said, "I think it's great, really awesome to stick to tradition." She said she couldn't wait to hear the bells ring, too, with a successful election

Tim Reidy
Show Comments (
1
)
Comments are automatically closed two weeks after an article's initial publication. See our comments policy for more.
david power
9 years 6 months ago
The cardinals have chosen an absolute belter.I once spent thirty minutes talking to cardinal bergoglio in Rome, he is a very holy man and a man of great intelligence.I did not dare to imagine they would choose him but my every expectation has come true.He sent me some books that he wrote a foreword too on the persecution of the jesuits and his writing is excellent.We truly have a great man!!!!!!