When Pope Francis asked an Israeli Reporter, "How Can I Help?" 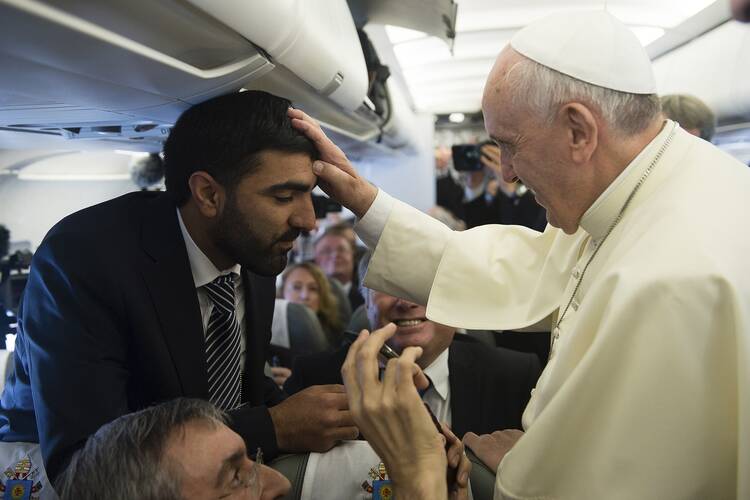 AMMAN, Jordan — On 13 June 2013,  Pope Francis granted an interview to Israel’s Channel 2 TV at Santa Marta, the Vatican guesthouse where he lives. That interview made history; it was the first time that a TV crew entered Santa Marta to interview the pope.

What is not known, however, is that immediately afterwards Francis asked to speak in private with the TV reporter, Henrique Cymerman. He opened the conversation with a highly significant question regarding the Israeli-Palestinian situation: “How can I help?” and he then followed up with a series of other pertinent questions.

I learned all this because Cymerman happened to be sitting in front of me on the papal plane from Rome to Amman. When the Pope came to greet each of the 73 journalists from 15 countries that are accompanying him on his “pilgrimage of prayer” to Amman, Bethlehem and Jerusalem, I noticed that he spoke to the Israeli in Spanish and that it was clear that they  seemed to know each other well, and had something to say to each other.  My curiosity was aroused.  Afterwards, I asked the Israeli how he had first come to know the Argentinian pope and he told me this fascinating story.

Cymerman was born in Portugal of a Spanish mother and Polish father, and came to Israel at the age of 16. He speaks many languages and is one of the lead reporters for Israel’s Channel 2 TV. In April 2013 he travelled to Buenos Aires to give a conference on the Middle East.  Some 700 people attended including Rabbi Abraham Skorka, an old friend of Francis.  Skorka, it seems liked what the Israeli said, and afterwards approached him and asked if he would like to meet Pope Francis. Cymerman responded enthusiastically and so Skorka contacted the pope and arranged an interview for June 7. Cymerman, however had to ask the Pope if he could postpone it as his daughter was getting married on that very day. Francis graciously agreed, and rearranged it for June 13, and gave his blessing to the reporter’s daughter’s wedding. The Israeli interviewed the pope on June 13; Skorka was present, and the interview was broadcast on Channel 2 TV that same month.

Immediately after the interview, however, as mentioned earlier, the pope opened a conversation with the Israeli reporter. “I spent five hours with the pope that day,” Cymerman told me. The Pope began with the question: “How can I help?”, in relation to the Israeli-Palestinian conflict, and then followed up with a series of probing questions regarding the reality on the ground in Israel and Palestine, the threats and the possibilities there, and many profound questions about the Israeli and Palestinian leaders. It was clear that he was seriously concerned at their failure to make peace, and he was exploring if or how he might help, Cymerman  told me.

In the course of their conversation, the pope told the Israeli reporter: “I want to educate people to peace. I want to stop hatred, I want to stop the fighting. I want to help people try and find other ways to live together.” Cymerman said he could see that Pope Francis is a very original spiritual leader “who is thinking outside the box,” and passionately wants to promote peace.

On his return to Israel, Cymerman went to talk with the President and Prime Minister of Israel and with the Palestinian President, and thus, he said, the idea of a papal visit began to take shape. Francis and Cymerman remained in contact by mail and by phone, and they spoke a number of times quite recently too.

“Every visit of a pope to Israel is important, but the visit of Francis is the most important,” Cymerman told me. In the year since the Argentianian became pope, he said, “Francis has become the leading moral authority in the world. He’s impacting on people everywhere, and he’s changing Israelis too, even before his arrival.” He believes the papal visit “can change the situation between Israelis and Palestinians. Pope Francis has the moral authority to push them to reconciliation."

The Israeli TV reporter believes that Pope Francis has already had a big impact on Israelis because he has stated cleary that “Anti-Semitism is a sin” and that “inside every Christian there is a Jew.”

“By his gestures he is having a big impact on people here, and now he’s doing something that has never been done before, he’s invited a Jew and a Muslim to accompany him on this visit, and that’s a very strong message to people in this part of the world,” Cymerman stated.

Sitting next to the Israeli on the plane was Imad Freu, a 30-year old Palestinian Christian from Ramallah, a reporter for the Catholic Centre for Media Studies in Jordan. They had met for the first time in Rome the previous day as they prepared to join the press corps on the papal flight. On the plane they talked a lot, and  discovered they had much to say to each other. When the Pope came to greet them, the Freu told him he was a Palestinian Christian and asked him to bless some rosary beads - including one for his fiancee, as well as a picture of his fiancee and him. As he departed, Francis turned to the Israeli and said, pointing to the Palestinian, “Take good care of him!”

Imad Freu told me afterwards that “as people we can get along well together, it is politics that complicates our lives.” He is sure the pope will get a tremendous welcome in Bethelehem on May 25, but Manger Square can only hold 10,000 people, and many, many more had wanted to come.

The Palestinian hopes that Pope Francis can somehow kick new life into the seemingly moribund peace-process, and create a climate in which Israeli and Palestian political leaders can begin in earnest to negotiate a two-state solution which would bring peace and justice for Palestinians and reconciliation between them and the Israelis.

His Israeli colleague, Cymerman, has high hopes that Francis can contribute significantly to precisely that goal, and that he can do so much by gestures as by words in the next two days.