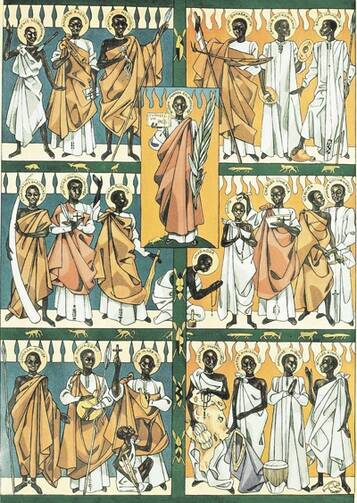 James Martin, S.J.
@jamesmartinsj
Show Comments (
2
)
Comments are automatically closed two weeks after an article's initial publication. See our comments policy for more.
Eugene Pagano
7 years 6 months ago
Thank you for your ecumenical acknowledgement of our Anglican martyrs.
David Pasinski
7 years 6 months ago
While Pope Paul could only formally canonize the Catholic martyrs, this account shows an interesting union in beliefs, suffering and death with Anglicans as well. I wonder what more can be made of that... But what is more striking is the current political climate in Ugand regading homosexulaity. As this nation has become among the most punitive to homosexual persons and the Christian churches have scandalously - in my opinion - congratulated the government for these laws and furthered homophobia, the complex legacy of this issue and even these martyrs at this time deserves some greater than reflection in additon to recognizing this history. Chrsitians have a lot to answer for in the the ways homosexual persons are persecuted in this culture today and, to my knowledge, the Church has not been at all helpful as the leadership has thanked and given awards to the presdient for his stance and policies.