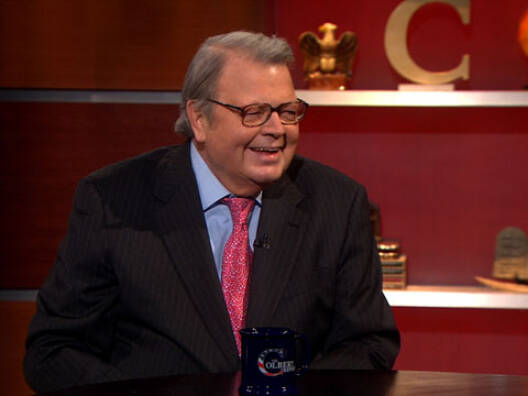 Pope Benedict XVI’s announcement on Feb. 11 that he will “renounce the ministry of Bishop of Rome” stunned the church and set the media scrambling. America was no exception; we were equally surprised and just as frenzied. In the 48 hours after the news broke, our editors gave more than two-dozen interviews to the secular press.

Providing commentary and assistance to the media in times such as these is an important part of America’s mission to interpret the church for the world and the world for the church. America’s editor at large, James Martin, S.J., made several media appearances, including one on “The Colbert Report,” the satirical news program on Comedy Central hosted by Stephen Colbert, the actor and comedian who plays a dangerously dimwitted, reactionary version of himself on the weekly program.

Also appearing on the show that night was Garry Wills, a onetime Jesuit and protégé of William F. Buckley Jr., who has moved steadily leftward over the course of his Pulitzer prize-winning career. Mr. Wills has just published a new book, the thesis of which is easily gleaned from its title, Why Priests? A Failed Tradition.

Some longtime watchers of the show noticed that a shocked Mr. Colbert, a devout Catholic in real life, nearly broke character. But Mr. Wills wasn’t finished: In the remaining two minutes of the interview, he went on to say that the priesthood and the papacy should be abolished and that the sacrament of the sick is “an invented sacrament.”

Now it should be obvious to even the most casual Roman Catholic that Mr. Wills’s views are definitely heterodox and probably heretical. I don’t use that last term in a desultory fashion. In fact, the word heresy is too casually invoked in popular ecclesiastical discourse. I am personally loath to say that any person—liberal, conservative, whatever—is or is not a Christian solely because of his or her theological beliefs.

But it is not really Mr. Wills’s unorthodox views that give us cause to question his Christian commitment; it is his manifest lack of charity. What Mr. Wills said on “The Colbert Report” was insensitive; frankly, it was insulting, not just to me and not just to priests but to millions of sincere, faithful Catholics. The fact that Mr. Wills is a Catholic is not relevant here; his baptismal certificate is not a license for incivility. We would not tolerate this kind of behavior in a non-Catholic. Why do we tolerate it in Mr. Wills?

Every day, in almost every conceivable language, millions of Catholics take part in eucharistic liturgies, in prayers before the Blessed Sacrament, in processions and eucharistic devotions, all manifestations of a deeply held, millennia-old belief that in the Eucharist mere bread and wine do indeed become the body and blood of Christ. This is our faith; this is the faith for which we live and for which many of our forebears died.

Mr. Wills may disagree with how the eucharistic mystery has been traditionally expressed in philosophical or theological terminology; he may even dissent from the substance of that teaching or from any Catholic teaching, for that matter; that is his prerogative. He is not entitled, however, to wantonly insult us with claims that our sacraments are “invented,” that our priests are merely “pretending” or that our most cherished gift is somehow “a fake.” Mr. Wills does not necessarily owe us an account of his unorthodox views. He does, however, owe us an apology.