Making the Most of the Year of Mercy 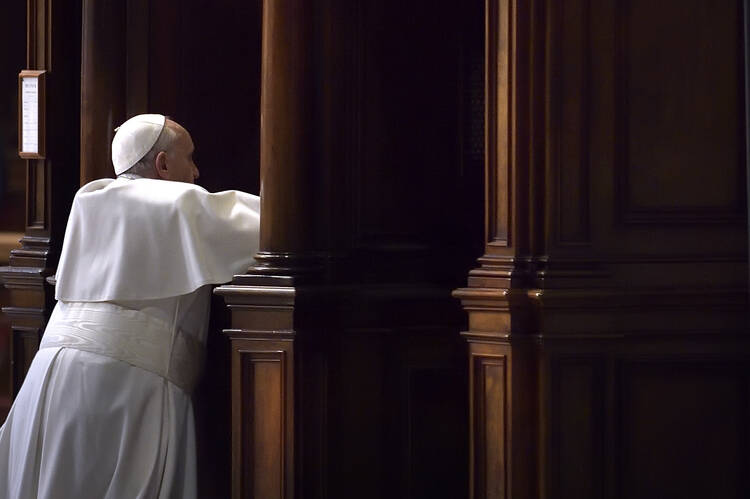 With his call for a Jubilee Year of Mercy from Dec. 8, 2015, to Nov. 20, 2016, Pope Francis has opened up a space for possible discussion at the international level. A Year of Mercy provides the opportunity to advance several issues that affect people on the periphery. These are a source of pain.

One, which relates to the Synod on the Family, is the situation of people who have divorced and remarried without the benefit of annulment. It seems the opportunity to go to Communion despite living in a second marriage without an annulment of the first one ought to be one opened up to people who have lived faithfully in second marriages. These are people at Mass every week that church rules prevent from accompanying spouse and children to the altar at Communion. Surely the rules here can be revisited, as can the situation that prevents a spouse from getting an annulment. Was the person in hindsight unfairly denied an annulment, for example? Perhaps the papal commission studying annulments will propose modifications or changes that will address those in need of healing.

Another contemporary issue is that of gay people living on the periphery of the church. For decades, even centuries, gays and lesbians have lived in the shadows. Their needs were ignored. This changed as society changed in the 20th and 21st centuries. Today people are open about their homosexuality, in their families and society. How do we treat them as part of the church and give them the support all church members deserve? Should the church offer more support for them to help them live faithfully to God and with the spiritual support that all in the religious community need? How do we go about this?

On another issue, with attendance at the sacraments in decline, should we pursue creative means to administer confession? For example, on special occasions the church could use general absolution, a form of confession which allows people to be absolved of their sins without individual confession of them to a priest. It has been used before on special occasions, such as soldiers going into battle. Could this be used in Lent or Advent? We are close to this now with parish sacrament of reconciliation services, which now include brief individual confession of sins. The priest might use general absolution services or other occasions to preach on the benefits of individual confessions, which include time for discussion and exploration of the roots of problematic behavior that leads to sinfulness and changes in behavior to avoid it.

Pope Francis has made mercy a key theme of his pontificate and has spoken of an “age of mercy.” People listen to him. There is a huge need for mercy in today’s society where hurt abounds in many areas. People seem open to mercy, which emphasizes forgiveness over judgment, as never before. We need this.

Mary Ann Walsh, R.S.M., is a member of the Sisters of Mercy of the Americas Northeast Community and U.S. Church Correspondent for America.

Mary Ann Walsh
Show Comments (
3
)
Comments are automatically closed two weeks after an article's initial publication. See our comments policy for more.
Stephanie Barrett
7 years 8 months ago
Your article Sr. Mary Ann is on target. In my former parish, our motto was, "All are welcome at the table." "Let he who is without sin caste the first stone."John 8:7 - this is to those accusing a woman caught in adultery. My response is, not I Lord, my sins are before you. You see who I am, nothing is hidden. And yet you love me, and welcome me home, over and over again. Now go and do the same.
Abigail Woods-Ferreira
7 years 8 months ago
I think this is also an opportunity to explore theologically and spiritually the meaning of mercy, particularly by looking to the Eastern Churches. One of the fears of many right now in relation to Francis's call for "mercy" is that doctrine and pastoral practice will become severed. But Byzantine Christianity has a rich theology of mercy that is prayed in the liturgy, and is lived out spiritually through asceticism and pastorally though concepts like "oikonomia." Prayer, theology, spirituality, and pastoral practice form a coherant whole that is infused with God's mercy. Mercy does not mean pastoral practice becomes severed from doctrine - merciful pastoral practice is the very expression of what lies at the heart of Christian doctrine. Mercy can bring us closer together in many ways, both at the personal and ecumenical levels.
Sara Damewood
7 years 8 months ago
Thanks for your good thoughts and questions, Sister Mary Ann. We certainly do need an age of mercy.