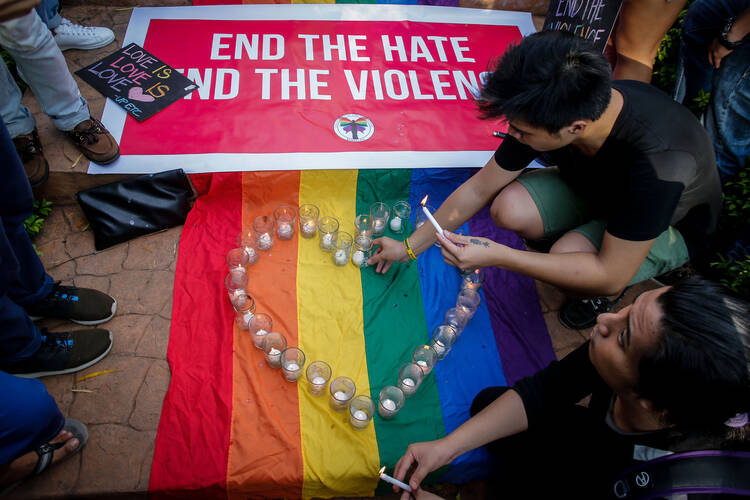 Since there has been so much conversation around Pope Francis' comments about the church offering an apology to the L.G.B.T. community I thought I would offer a little context.

First, Pope Francis was responding to a question that referenced a comment, from a few days ago, by Cardinal Reinhold Marx, president of the German bishops' conference, who himself said that he felt the church should offer an apology since it had marginalized that community. Here are Cardinal Marx's comments.

Second, here is what the pope said in response to the question from Cindy Wooden of Catholic News Service, aboard the papal plane, on the way back from Armenia: “I believe that the church should not only say sorry, as Cardinal Marx says, it should not only say sorry to the person who is gay that it has offended, but also it should say sorry to the poor and to women who are exploited, and the children who are exploited for work.” He went on to explain: “When I say church I mean Christians. The church is holy but we are sinners. Christians must say sorry for not having accompanied them, for not having accompanied many choices, many families.” Indeed, “Christians must say sorry and not only for this. They must ask forgiveness, not just say sorry” and also ask God’s pardon. “It is a word that we forget a lot today." Here is Gerard O'Connell's story.

Third, apologies from the church to particular groups, or even individuals, are not new. In the Jubilee Year of 2000, St. John Paul II issued sweeping apologies to, among other groups, the Jewish people, indigenous peoples, refugees, women and others. And forgiveness of course is an essential part of the Christian life. More about that here.

Fourth, this is groundbreaking. No matter how many people tell you that this is nothing new, it's new. No pope has spoken like this regarding the L.G.B.T. community. Just a few years ago saying that the church should "apologize" to gays and lesbians would have probably gotten a person censured, disciplined or silenced. Why? Because a few years ago any call for an "apology" would have been seen as a critique of church teaching on homosexuality. But Pope Francis knows that the L.G.B.T. community indeed has felt marginalized by the church.

Fifth, he's correct. No group feels as marginalized as the L.G.B.T. community. Why? Many reasons. Here are a few: First, the language used around their experience. Their inclination is "objectively disordered," according to the catechism. Now, this is not the place to enter into a lengthy discussion of that phrase, but for most L.G.B.T. people it is deeply offensive. (Imagine being told that a deep part of you you, the part that feels love, is disordered.) Also, some bishops, particularly in the developing world, use very offensive language when speaking, if they speak at all, about the L.G.B.T. community. Others, in countries where gays and lesbians are persecuted in extreme ways, either offer little opposition to government policies, or, in some cases, even tacitly approve of them. Finally, many L.G.B.T. people feel unwelcome in their local parishes, where some priests, either from the pulpit or in private conversations, create an unwelcome environment. And if you doubt any of this, just ask your L.G.B.T. friends. You may say that they shouldn't feel marginalized, but they do.

Sixth, a clarification. Federico Lombardi, S.J., the papal spokesman, noted that the pope used the word "conditione." In Italian, "conditione" is not a medical condition, but is better translated as "situation."

Finally, while this is groundbreaking, it's important to keep it in context. Pope Francis did not say church teaching was changing. He also placed the answer in a larger context, which included many groups that might have been offended by the church. Still, the tone and the response itself are historic. It is a very positive step forward for the L.G.B.T. community and the church. And of course the first is part of the second.