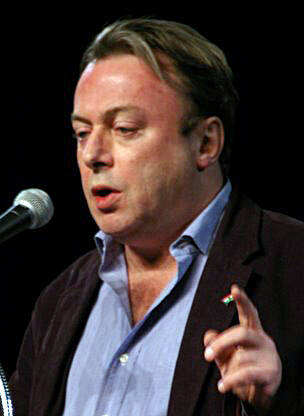 I asked the middle-aged man across from me, “Who was the last good American president?”

It was the year 2000. As a 19-year old college journalist studying history and political science, I was eager to know my drinking partner’s response to this question. He had just finished railing against Presidents Clinton, Reagan and Bush '41. At this point, I was wondering if he liked any U.S. president at all.

To my surprise, I didn’t have long to wait for an answer. Without hesitation, Christopher Hitchens leaned across the table, looked me in the eye, and quipped with boozy conviction: “Eisenhower.” Then he sipped his whiskey, took a drag from his cigarette, and exhaled through his nose as he stared me in the eye, waiting for my reaction amidst the frivolity of our dingy student hangout.

Amused, I asked: Why Eisenhower?

“Because he was the last president who didn’t take a dump on the Constitution,” Hitchens shot back, taking another drag.

Recently I’ve been thinking a lot about Hitchens, the British-born journalist who died at 62 on Dec. 15, 2011. He had a knack for punctuating discussions with playful one-liners. Some of his witticisms still come to mind whenever I go to a bookstore and see his books on atheism perched—ironically enough—on the religion and philosophy shelf.

When I shared that drink with him in March 2000, the self-described “conservative Marxist” had come to Wabash College in Indiana to debate Ronald Reagan’s legacy with the conservative Catholic political pundit Dinesh D’Souza. It was Reagan Appreciation Week at Wabash, where the student news magazine I edited had paid for these two men to cross swords. Hitchens is on my mind partly because, 10 years ago this summer, he wrote an article for Slate.com on the Wabash debate that remains posted online here.

At the time I saw him debate D'Souza, Hitchens was still a razor-sharp political writer for The Nation magazine, not the village atheist he later became. He was different in those days, more fun and less bitter. I, the future Jesuit, was not even Catholic when I met him.

Today I marvel at how God brought us together for that conversation after the debate. In my memory, the Hitchens who wrote leftist essays for The Nation 14 years ago was different from the Hitchens who made a public career out of atheism while dying from esophageal cancer. Sometimes I wonder whether they were even the same person.

When he visited Wabash 14 years ago, Hitchens had written little about God, and was too polite (“I don’t want to offend people,” he told me with sincerity) to broach the subject of religion in the debate. Although he was clearly a disillusioned idealist, he was not unpleasant toward people with whom he disagreed. He was charming, witty, and friendly to all of the students on our magazine staff. (By contrast, when Bill Maher did a stand-up comedy routine in the Wabash chapel in spring 2003, Maher went to great lengths to insult everyone in our small school.)

Despite his high-profile media presence as a writer and TV political pundit, Hitchens was also a more accessible person at the time, keeping his home number listed in the Washington, D.C., telephone book. While interning at The Washington Times national desk in 2002, I occasionally called him for comment or background information on a story. He always picked up the phone himself or—if he happened to be at his favorite bar—returned my call within a few hours.

In those days, neither of us knew Hitchens was speaking with a future Jesuit, and we never talked about religion. After he left The Nation in 2002, resigning in a feud with his editors over his support for invading Iraq, I never spoke with him again. That same year, I entered the Catholic Church and he testified against Mother Teresa’s cause for sainthood, calling her a “fraud, fanatic, and a fundamentalist.”

As I moved closer to God, Hitchens moved further away. Frozen out of Beltway politics by both liberals and conservatives, he turned more intensely to atheism and the bottle at the same time that I was turning to the rosary and mass. Well-known around Washington, D.C., as a functional alcoholic, journalist friends told me that Hitchens sat at the same bar every day, drinking whiskey and nursing his grievances. I suspect it was there that he grew ever more hardened in his belief that God was the cause of all the world’s miseries. He advanced this theory in "God is Not Great," his 2007 bestselling book.

Over the last four years of his life, atheism became his calling card, as Hitchens allowed his battle with religion to overshadow the rest of his journalistic career. Indeed, he arguably erased his career as a non-sectarian political writer in the public eye, leaving only his legacy as a public atheist to posterity. If you ask Americans in 10 years about him, how many will recall that Hitchens spent most of his career as a political writer rather than as an atheist writer?

I eventually learned that Hitchens had started his career in Britain as an idealistic liberal writer who valued truth in politics, but who frequently ruffled his allies' feathers with his iconoclastic words. As a student radical in the 1960s, he fell out with the Labor Party in Britain over its compromise with the Vietnam War. Following his disillusionment with British politics, he moved to the United States, where he was a frequent voice on American talk shows by the mid-1990s.

But in the late 1990s, the Democratic Party abruptly disowned Hitchens when he turned against President Clinton, testifying in an impeachment hearing that Clinton advisor Sydney Blumenthal had told him about a White House campaign to discredit Monica Lewinsky as a “stalker.” It was the beginning of the end for Hitchens in mainstream politics. Yet he continued to maintain an uneasy connection with the American left until 2002, when his support of the Iraq war led to his departure from The Nation.

As his disaffection from liberal circles left him without friends in Washington, Hitchens embraced public atheism with a renewed fervor. He emerged in his last years as a popular atheist author for whom God-bashing was now a favorite sport. At the same time, his personal life declined rapidly.

His movement toward public atheism was a sea change in his career. Other than writing a book against Mother Teresa in 1995, Hitchens was simply a political writer when I first met him. He even professed humanitarian concerns in the Wabash debate, telling D’Souza the Reagan administration had funded the rape and torture of American nuns in El Salvador as part of a “campaign of lying and savagery.”

He was vain and particular in his habits, smoking mountains of strong Turkish cigarettes which I suspect were more immediately responsible for his esophageal cancer than God. "The air reeks of smokelessness," he quipped to us after arriving on the Wabash campus. He also joked about Indiana's blue-light liquor laws, which had somehow prevented him from ordering a second drink one Sunday night at the local Applebees while his first whiskey was still unfinished.

It’s hard to fathom how such a person meets the end of his life. I only know Hitchens suffered a lot in his final illness and I’m sorry he’s gone. When I think of him today, I still recall him as the quick-witted journalist I met at Wabash, rather than as the conflicted atheist he later became. But I also know they were the same person: a frustrated idealist who was filled with much bitterness despite also being a deeply compassionate man.

Sometimes, I even find myself praying for Christopher Hitchens to the God he said he never knew. Why Hitchens? I suppose I do it because he was the last good American atheist.

Thank you all for reading. I hope my affection and respect for Christopher Hitchens was evident in the piece. He and I weren't close, but I did know him as a journalism colleague and I do miss his presence in the public media. My titular line about the "last good American atheist" is really a gentle and playful -- but sincere -- pun on his line to me about "the last great American president" referenced at the start of the essay.