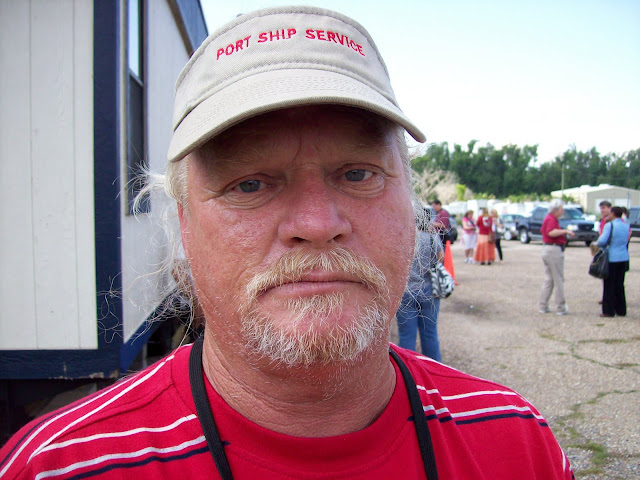 During my travels to New Orleans this past June, I saw first-hand the good work that Catholic Charities of New Orleans is doing to help those affected by the oil spill in the Gulf (including Chris Nelhig, the fisherman pictured at right). Catholic Charities has provided food, rent assistance and counseling, among other services, but now its funds, including a $1.1 million donation from BP, are drying up. Today, the organization issued a press release explaining their situation and asking for help:

(New Orleans, LA)  – Catholic Charities Archdiocese of New Orleans, which has provided services to more than 19,000 fishermen and their families since May 1, reports funds to continue the work are running out.  The services provided at 9 different sites along the coast cost over $100,000 per week to provide.

“We are now spending our meager reserves to assist fishermen and fishing communities affected by the spill.  We will not waver in our commitment to the people,” said Catholic Charities Co-President Gordon Wadge. “We believe supporters locally and nationally will come through for us and enable us to continue to provide the quality services that have allowed so many to cope and keep their lives together.”

BP provided $1.1 million dollars in funding on May 18 for 30 days of service. The oil company approached Catholic Charities since the agency was already delivering services, and BP was impressed by the effectiveness of the agency’s emergency model of case management, mental health counseling, and direct assistance (including food from our affiliated ministry Second Harvest Food Bank). Catholic Charities has worked closely with BP’s community outreach staffs on the ground.

Catholic Charities leveraged that initial contribution from BP to provide 60 days of service. At this point, Catholic Charities has been providing assistance to fishermen and their families for 90 days. $1.8 million in funding, including contributions from individuals and foundations is now exhausted.

“Catholic Charities was approached to act as lead agency for the local VOAD (Voluntary Organizations Active in Disaster).  In late June, we submitted a request to BP for $12 million in additional funding to serve seven civil parishes in coastal Louisiana. BP has been in discussions for a month with officials from Louisiana, Mississippi, Alabama and Florida with regard to funding of necessary services on the ground,” said Catholic Charities Co-President Jim Kelly. “The real danger is that our ability to put food on people’s tables, to counsel those in need, and to pay outstanding bills for fishing families with no income could come to an end.  We have a covenant with these brave and hard working people, but our work is not sustainable without new funding.”

The oil spill has yet to be classified as federally-declared disaster.  That declaration would immediately activate federal assistance programs that would allow for a long term, integrated disaster response.

Despite the financial situation, Catholic Charities has recently increased our services with the addition of a Mother’s Day Out program in several of our Oil Spill Relief Centers.

Services provided so far (through August 2) include:
We have provided emergency assistance to 19,577 people (7,960 families).
We have distributed $587,247 in food vouchers to affected families and $78,540 in emergency food boxes from our affiliated ministry Second Harvest Food Bank.
Our affiliated ministry Second Harvest Food Bank has distributed about 391,086 pounds of food(about 305,000 meals) to its member agencies in 11 Louisiana parishes affected by the oil spill.
We have distributed 393 cans of baby formula and 1,051 packages of diapers.
Our mental health crisis counselors have provided crisis counseling to 6,153 people.
We have distributed $193,756 in other direct assistance and baby supplies to families.

If you're willing and able to donate, you can do so here.

Kerry Weber
@Kerry_Weberweber@americamagazine.org
Show Comments (
1
)
Comments are automatically closed two weeks after an article's initial publication. See our comments policy for more.
we vnornm
12 years 3 months ago
Lucky BP wasn't drilling in the sea of Galilee: Peter, Andrew, James, and John would have been out of business!

I think by donating to this cause we can in a sense participate in a 21st century re-creation of the day long ago when these anglers above pulled in empty nets but then were directed to lower their nets where the fishes were.

Help fill the nets of the Gulf fishermen!