Heisman winner Caleb Williams inspired by the mantra of his Jesuit education: ‘Men for others’ 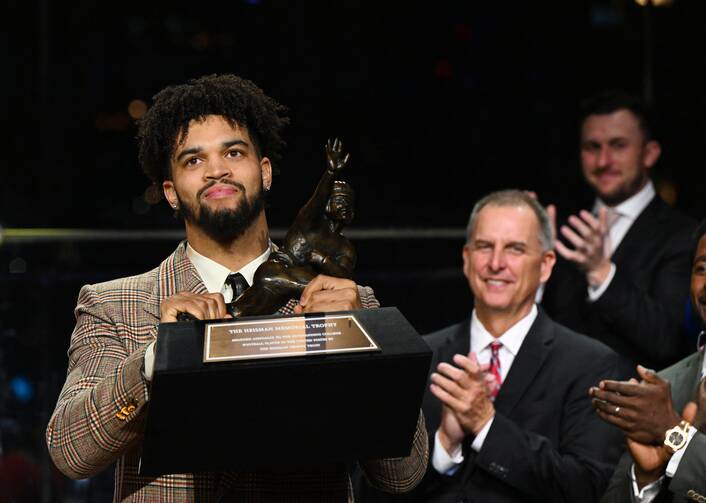 In March 2021, high school football quarterback Caleb Williams was asked by Sports Illustrated about his accomplishments as he prepared to graduate from Gonzaga College High School in Washington, D.C. The five-star recruit could have named any number of achievements. Sports Illustrated had listed him as the No. 1 recruiting prospect in the nation; he had led his team to an epic, nail-biting championship win in his sophomore year; he won countless awards from names like Gatorade and The Washington Post.

But when he said what brought him the most pride, none of the accolades figured into his answer.

“My most accomplished thing here is building a brotherhood with those guys,” Mr. Williams said of his teammates. “[It’s] the brotherhood we’ve had, that we’ve built here. How tight we’ve become.”

Less than two years later, after he became the 2022 Heisman Trophy winner and broke the University of Southern California record for rushing yards by a quarterback in a single season, Mr. Williams reaffirmed the impact that his high school team and its coaching staff had on him.

“Coach, you may not know this, but the Gonzaga mantra that you drilled into us, ‘Men for others,’ has helped inspire me,” he said in his Heisman acceptance speech. “So thank you, coach; thank you, Gonzaga.”

Whether one cheers for Caleb Williams on the field or cheers against him, it is clear that Jesuit education shaped the quarterback at least as much as he shaped Gonzaga’s football program.

Whether one cheers for Caleb Williams on the field or cheers against him (and as a proud graduate of the University of Notre Dame, I fall into the latter camp), it is clear that Jesuit education shaped the quarterback at least as much as he shaped Gonzaga’s football program.

Randy Trivers, the head football coach at Gonzaga, said in an interview with America that Mr. Williams represents the pairing of physical talent with mental and spiritual maturity that he tries to cultivate on his team.

“Caleb is supremely talented athletically, but what makes him really elite is everything that he is in mind and heart and spirit,” Coach Trivers said.

Coach Trivers started at Gonzaga College High School in 2014. He played football at the College of the Holy Cross in Worcester, Mass., from which he graduated in 1995. He said that in coming back to a Jesuit school, he was reminded how far the Jesuit identity can go in helping shape a sports program.

Coach Trivers began a tradition during the 12-game season of picking an inspiring word from a list he formed; each word was a slogan for a particular game and became the team’s focus for that game. They selected the word “trust” for their championship game against DeMatha High School in 2018.

“Caleb is supremely talented athletically, but what makes him really elite is everything that he is in mind and heart and spirit.”

In that game, the Gonzaga Eagles were losing 20-0 at the end of the first quarter. The first time they took the lead was with 39 seconds left in the game, but a returned kick by their opponent had Gonzaga down by three with only seconds left and no timeouts. Mr. Williams, then a sophomore, threw a 56-yard “Hail Mary” pass toward the end zone in desperation—appropriate for a game in which the inspirational word was “trust.” The leap-of-faith pass was snagged by receiver John Marshall. Gonzaga won the championship, 46-43.

Clips from the epic ending circulated on social media, including the speech that Coach Trivers gave his team after the victory.

Coach Trivers told America that Mr. Williams inspired his teammates during that game with his drive and determination to keep the fight going.

“He made sure you knew he had faith in you, and that would help you make plays you didn’t think could be made.”

“Caleb as a quarterback, it’s a great position in terms [of the way] you’re really influencing others and people are really looking to you,” he said.

Teammates echoed the idea that Mr. Williams influenced them while at Gonzaga.

“His personality would just uplift you. He made sure you knew he had faith in you, and that would help you make plays you didn’t think could be made,” former teammate Nate Kurisky told The Athletic.

Mr. Williams has sought to keep up that leadership off the field. He has spoken frequently about his experience being bullied as a young kid, which prompted him to set up the Caleb Cares Foundation. The charity and its partners, which have included Coca-Cola and the Los Angeles Unified School District, focus on youth outreach and after-school programs.

Both Mr. Williams and Coach Trivers have credited Gonzaga’s Jesuit identity with propelling that mission forward.

At times Mr. Williams has drawn heat from players and commentators, especially as his profile has grown over this season. He was criticized for painting expletives on his nails before big games, including showdowns against Notre Dame and Utah.

Coach Trivers spoke about “a drive to prepare to be great” that he saw during Mr. Williams’s time at Gonzaga.

“That’s not a great representation of him or the school,” said Kirk Herbstreit, a commentator for ESPN. “He can paint whatever he wants. ‘Fight On’ [a U.S.C. cheer], maybe, would work. But I don’t know about these.”

Mr. Williams has said that the nail-painting tradition began in middle school (without the expletives) with his mom, and that he was bullied for it. During his Oct. 8 game against Washington State, he instead painted the Suicide & Crisis Hotline phone number, 988.

This season did not end the way Mr. Williams had hoped: A loss to Utah kept U.S.C. out of the College Football Playoffs, and the team suffered a tough loss to Tulane University in the Cotton Bowl game.

Coach Trivers spoke about “a drive to prepare to be great” that he saw during Mr. Williams’s time at Gonzaga, an attribute that he thinks will continue to serve the sophomore quarterback in years to come.

And if the 2018 championship taught him anything, it’s not to give up on Caleb Williams when things look rough.

“If there’s time on the clock, whether on the field or in life, there’s a chance,” Coach Trivers said.