The Christ-haunted artistry of Florence + the Machine 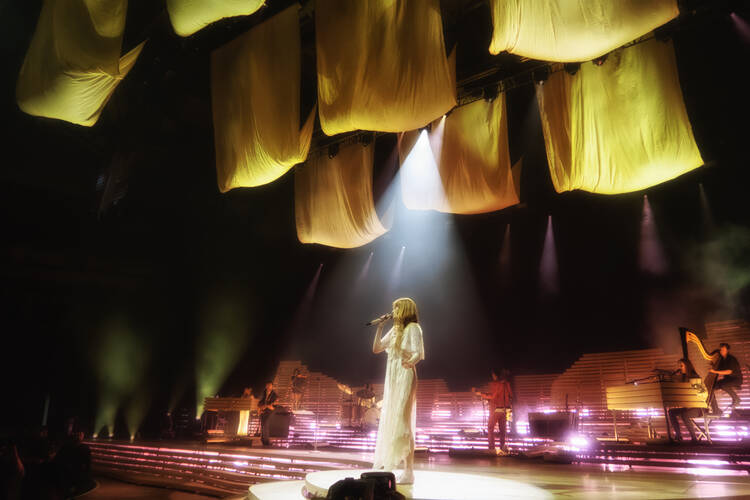 Florence + The Machine performs at the Key Arena in Seattle, Wa., in 2018. (David Lee via Wikimedia Commons)

On April 20, 2022, Florence + the Machine released the music video for a new single, entitled “Free,” from their latest album, “Dance Fever.” The video, filmed on Nov. 18, 2021, in Kyiv and dedicated to “the spirit, creativity, and perseverance of our brave Ukrainian friends,” was filmed using Ukrainian filmmakers and artists, “whose radiant freedom can never be extinguished.”

In the song, lead singer Florence Welch plays herself, and Bill Nighy the personification of her anxiety. Yet the video uses this particular inspiration from the singer/songwriter’s life to explore universal aspects of the human condition, especially how to hold onto hope and find freedom in the face of suffering and death. The video and the song ask: How can someone live freely and avoid being crushed under life’s incomprehensible challenges?

Welch was raised Catholic, but has said in interviews that she is an agnostic who does not subscribe to any religion. And yet the sacramental imagination of Catholicism has a deep hold on her psyche. As Flannery O’Connor said of the American South, Welch seems if not “Christ-centered,” then certainly “Christ-haunted.”

“I find it’s nice to mix the mundane and the magical, the irrelevant with the huge themes. Living is dealing with the everyday and the notion that you’re going to die.”

In an interview in 2011, Welch talked about her upbringing: “I went to Catholic school and the first songs I remember liking were hymns,” she explained to USA Today. “I find it’s nice to mix the mundane and the magical, the irrelevant with the huge themes. Sex, love, death, marriage, guilt—mix that with seeing a huge sky or going for a walk or turning the page of a book. Living is dealing with the everyday and the notion that you’re going to die.”

Whether she realizes it or not, this way of thinking is very much in line with the Catholic faith. Living is about the quotidian things and about the reality of death (or “memento mori”). The things she mentions here that she likes to blend in her music—sex, love, death, marriage, the sky, a walk, a book—are in fact deeply infused with sacramentality and God’s grace.

In another interview from the same year, Welch discussed this again: “I really like the idea that the Renaissance time echoes ours,” she told the Los Angeles Times Magazine. “We’re dealing with all of the same things they did—love and death, time and pain, heaven and hell. Those things never go out of fashion. But I like interspersing that with odd mundanities—fill everything up with grandeur, then add something about a kitchen sink.” It’s interesting that Welch finds inspiration in the Renaissance period, as the Catholic Church was the main patron of the arts at this time. Again, she’s right that universal questions of love, death, time, pain, heaven and hell were just as pertinent then as they are now.

She’s right that universal questions of love, death, time, pain, heaven and hell were just as pertinent then as they are now.

“Free” deals with many of these topics. Early in the song, Welch sings, “I’m always running from something/ I push it back, but it keeps on coming.” That’s true of her anxiety, but it’s also true for all of us—at some point, we all find ourselves running from something that’s difficult to face. The song’s bridge really drives home these questions about hope and freedom:

Is this how it is?
Is this how it’s always been?
To exist in the face of suffering and death
And somehow still keep singing?
Oh, like Christ up on a cross
Who died for us, who died for what?
Oh, don’t you wanna call it off?
But there is nothing else that I know how to do
But to open up my arms and give it all to you.

Welch expresses something fundamental here, something that can only be understood when one has experienced suffering and faced the abyss firsthand.

Like many saints and sinners, Welch expresses something fundamental here, something that can only be understood when one has experienced suffering and faced the abyss firsthand. At the point of giving up, the only thing left is love. All the singer knows how to do—like Christ—is “open up my arms and give it all to you.” It sounds a lot like John 15:13: “No one has greater love than this, to lay down one’s life for one’s friends.”

It is fitting that this should be the main sentiment of a song called “Free,” since, as St. John Paul II put it, “Freedom consists not in doing what we like, but in having the right to do what we ought.” Having received Jesus’ command to “love one another” that follows in John 15:17, we exercise our true freedom when we love.

“Free” is not an exception among Florence + the Machine’s songs. For instance, the song “Big God” from Florence + The Machine’s 2018 album “High as Hope,” is by Welch’s admission about “obviously, an unfillable hole in the soul, but mainly about someone not replying to my text.” The chorus includes the lyrics, “You need a big god/ Big enough to hold your love/ You need a big god/ Big enough to fill you up.” That “hole in the soul” sounds reminiscent of the way Saint Augustine described the human heart: restless until it finds God.

Life is also about finding meaning in suffering and death and finding the faith, hope, freedom and love that can endure these things.

On her 2015 album “How Big, How Blue, How Beautiful,” Welch sings again about feeling lost or restless and trying to find meaning in the midst of trials that are difficult to understand. The song “St. Jude” was written about the 2013 British storm named, coincidentally, Florence. Saint Jude is the patron saint of lost causes, and Welch plays with this idea. The chorus says, “St. Jude, the patron saint of the lost causes/ St. Jude, we were lost before she started” and then in one of the last verses, it concludes: “And I’m learning, so I’m leaving,” Welch sings three times in the song. “And even though I’m grieving/ I’m trying to find the meaning/ Letting loss reveal it.”

Once again, living is about dwelling in the everyday and about embracing the reality that we will die. It’s also about finding meaning in suffering and death and finding the faith, hope, freedom and love that can endure these things.

The band’s 2011 hit song “Never Let Me Go” from their album “Ceremonials” also hints at sacramentality. Welch imagines herself being drawn to the bottom of the ocean, with language that seems baptismal. “And the arms of the ocean are carrying me,” she sings in the refrain, “And all this devotion was rushing out of me/ And the crashes are heaven for a sinner like me/ But the arms of the ocean delivered me.”

Amid these examples of songs of belief and hope, there are just as many of doubt, confusion, anger and resistance. In “Girls Against God” on the album “Dance Fever” she sings: “I met the Devil/ You know, he gave me a choice/ A golden heart/ Or a golden voice.” In “Seven Devils” on Ceremonials, she claims, “Holy water/ Cannot help you now/ A thousand armies/ Couldn’t keep me out/ I don’t want your money/ I don’t want your crown/ See, I’ve come to burn/ Your kingdom down.”

Perhaps even without realizing it herself, Welch maintains some vestiges of the faith from her childhood. But what is clear from her repertoire, especially the latest album and songs such as “Free,” is that Florence Welch is influenced by hymns, images and fundamental teachings of Catholicism. Amid all her work, the message that echoes loudest is that love remains, despite us always “running from something,” or feeling the soul’s hunger, or facing suffering and death. Love remains.