Interview: Mark Wahlberg has been wanting to make a movie like ‘Father Stu’ for years 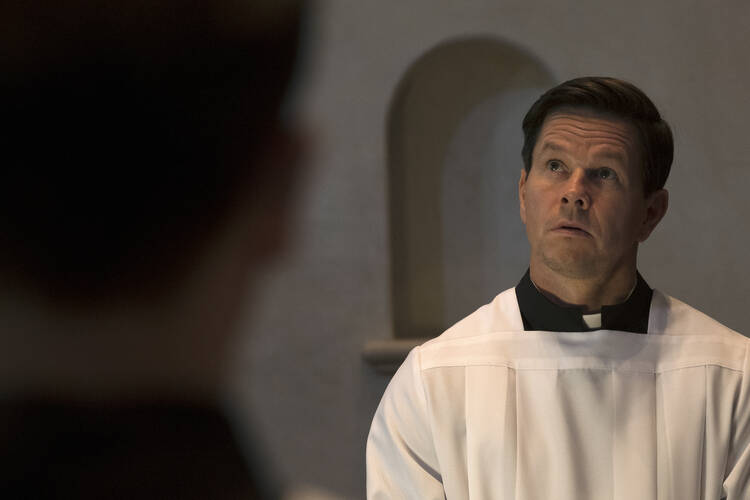 “The religious types were all very nervous, and they all wanted me to make a faith-based movie that was very safe, very middle of the road, and very kind of, you know, bland,” says Mark Wahlberg. “And we’ve seen those movies, and they don’t really move the needle much.”

Wahlberg—who is calling in from somewhere out on the road—is wondering if he can be heard clearly as he is using an ancient hotel phone that “looks like it’s a prop from ‘Get Smart.’” The ’60s spy sitcom reference is apropos as the Hollywood A-lister is on a mission of his own.

It is early March, and Wahlberg is deep into an intense promotional campaign for his new film, “Father Stu,” which will take him through its April 13 opening, in the middle of Holy Week. Wahlberg spent the previous night screening the film at Loyola University Chicago for an audience that included a group of young Jesuits. He is holding screenings all across the United States beating the drum for “Father Stu,” a true story about a rough-and-tumble failed boxer who became a priest.

Wahlberg recently called the film the “most important movie I’ve ever done, and…the best movie I’ve ever been a part of.” Considering he has been nominated for two Academy Awards (“The Fighter” and “The Departed”) and has served as executive producer of iconic shows like HBO’s “Entourage” and “Boardwalk Empire,” that is quite a statement.

The film is clearly important to Wahlberg, a very public and committed Catholic with his own violent past, on personal, professional and spiritual levels. “I’ve always talked about my faith, which is good and fine and dandy and people know that,” he says. “But then at the same time, you’ve got to kind of put your money where your mouth is.”

For Wahlberg, who has built an enormous career as one of Hollywood’s biggest power players, “Father Stu” represented a level of engagement around his faith and his work life that he had been considering for years.

“I’ve always been like, O.K., as soon as I get to a certain place, and I have a certain voice and reach and platform, then I’ll start doing more things that will move the needle in terms of my faith, and things that I think could be productive, helpful and in service. So when this project came to me, I was like, ‘You know what? I need to go make this.’”

For Wahlberg, “Father Stu” represents a level of engagement around his faith and his work life that he had been considering for years.

Wahlberg first came across the story in 2016 and had been developing the film with David O. Russell, who directed “The Fighter.” But he felt the script they had wasn’t going in the right direction. “I just had a sense of urgency that I didn’t really feel like [Russell] had or anybody else had,” he says. Wahlberg wanted complete creative control, so he decided to finance the film largely with his own money, much as his friend and “Father Stu” co-star Mel Gibson did with “The Passion of the Christ.” The screenwriter Rosalind Ross, who is also Gibson’s longtime girlfriend, eventually wrote a screenplay that Wahlberg loved so much that he asked her to direct as well—her first time helming a film.

In “Father Stu,” Gibson plays the troubled, alcoholic father to the film’s title character, Stuart Long (Wahlberg), a Golden Gloves-winning boxer who leaves his native Montana after his prizefighting dreams fizzle. Chasing stardom, Long moves west to become an actor in Hollywood. While looking for his big break in Los Angeles, he works as a bouncer and gets into his own share of trouble, getting arrested for fighting and drunk driving.

A near-death experience on his motorcycle leads him to explore religion, and he agrees to become a Catholic in order to marry his Mexican-American girlfriend. At his baptism, Long feels a powerful call to ordination. After significant resistance and numerous roadblocks put up by the seminary rector—played by Malcolm McDowell—he is finally admitted to study for the priesthood.

Ultimately ordained in his hometown diocese of Helena, Mont., in 2007, the real-life Father Stu had only a brief career in ministry.

While in seminary, Long is diagnosed with inclusion body myositis, an extremely rare, incurable autoimmune disease that mimics the symptoms of A.L.S. (Lou Gehrig’s disease). The disease causes his once powerful body to weaken significantly, creating new roadblocks to his ordination.

Ultimately ordained in his hometown diocese of Helena, Mont., in 2007, the real-life Father Stu had only a brief career in ministry. In the seven years before his death in 2014, his physical condition deteriorated rapidly, though the spiritual impact of his ministry grew exponentially. When he was confined to a motorized wheelchair, people lined up to meet with him outside the Big Sky Care Center, a rehabilitation center and nursing home where he lived and worked as a priest, confessor and spiritual advisor. Father Stu came to see his illness as the best thing that had ever happened to him, because it enabled him to let go of an unhealthy sense of pride he’d had for most of his life.

Wahlberg was convinced that Long’s story of redemption could have a real impact on a wide range of audiences, not simply on Catholics and Christians. “Tough grace and tough mercy is what Stu earned through his suffering, and through his work and giving back,” he says. Wahlberg hopes the film amplifies “the importance of redemption and rooting for people to change and grow as opposed to turning our backs on them.” In very troubled and uncertain times, Wahlberg says, his intention is to “give people hope, and encourage people to pursue their faith, whatever that is.”

Wahlberg was convinced that Long’s story of redemption could have a real impact on a wide range of audiences.

In order to show the reality of what tough mercy truly is, Wahlberg needed the freedom to tell Father Stu’s story as unapologetically and realistically as possible. The film’s R rating might scare off more pious religious audiences, but he believes strongly that the roughness of the film is also the source of its power.

“We wanted to make a movie that was edgy, and real and relatable to everybody,” he says. “And Stu was one of those guys that when he did his prison ministries, it was where he was most effective, because he could speak with [prisoners] on their level and he understood that he was one of them and that he had been in those seats. And now he was on the other side, and he was reminding them that God’s not going to give up on you and neither is he.”

Wahlberg himself was once in that seat as well. Having dropped out of high school in the ninth grade, he became involved with drugs and gangs and was arrested several times for racially motivated violent crimes in his native Boston. At 16 he was tried as an adult and charged with attempted murder of a Vietnamese shopkeeper; he later said he was high on PCP at the time. He served only 45 days for felony assault and decades later met with the victim to make amends and received forgiveness. He credits his own faith for saving him. “When all was said and done, and I was alone, and my friends weren’t there for me anymore, I had my faith, and I had people of faith trying to point me in the right direction. I had real success and experience in focusing my faith, and trying to do the right thing, and then getting good results.”

Wahlberg is famously regimented in his life, waking up before dawn to work out and then spend time in prayer.

Wahlberg is famously regimented in his life, waking up before dawn to work out and then spend time in prayer. (He has a chapel in his home.) He is a creature of habit and discipline and yet doesn’t seem to suffer from the rigidity and judgmentalism often associated with deeply devout people. Reporters have asked him to explain his Catholic faith and his support of same-sex marriage, to which he has responded: “I just think we have a lot more important issues to be worrying about.”

Perhaps it has something to do with the true stories he is often drawn to, but it would be hard to miss the sense of mercy and surrender in the movies Wahlberg is choosing to make. Given his own experiences, it is not surprising that there is something deeply lived—and flawed—in the characters he has played of late. In 2020, there was “Joe Bell,” the story of a disapproving father who sets off on an ill-fated pilgrimage across the country after his gay teenage son, Jadin, commits suicide after repeated bullying.

“I think there is a big, big issue about what it takes to make a man and what people put on the term or the emphasis of being a man…. All this macho stuff and how it’s defined, to me it just doesn’t matter,” says Wahlberg. “I think Jadin was the epitome of what a man should be. He was loving and kind and caring, and he had so much to offer. He didn’t have anybody to really accept all the wonderful gifts that he had to offer, which I found to be really heartbreaking.”

Now, he brings to the screen the story of the hell-raising Stuart Long, who is moved to change his life only to find his life transformed in ways he could not have foreseen. These choices of film roles suggest that Wahlberg is compelled to move beyond rhetoric and piety. “Father Stu” will likely appeal to church audiences, but it is not a story of holiness or triumph; it is a story of struggle and accompaniment. It is as if Wahlberg wants to shed mere ideas and abstractions and move toward embodiment.

“Stu really wasn’t so much about church,” he says, “as he was about the guy who died to build it.”