‘Uncharted’ is a surpringly Catholic video game. Why does the movie adaptation strip out the faith? 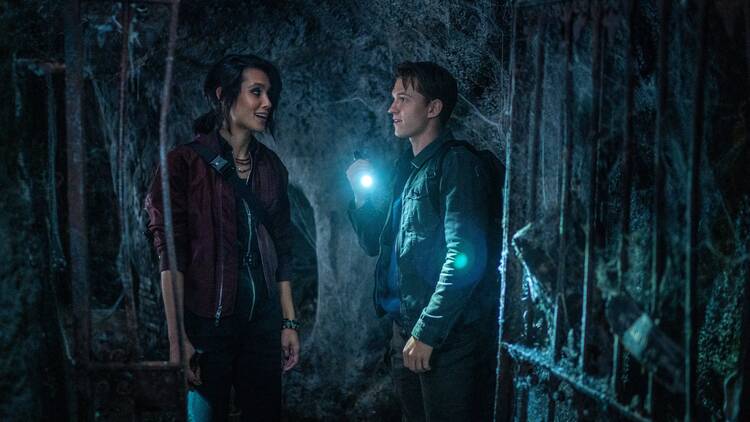 In the middle of “Uncharted,” the new blockbuster film from Sony Pictures, a group of fortune seekers enters Barcelona’s Basilica of Santa Maria del Pi in search of hidden treasure. Underneath the 15th-century church is the supposed resting place of a horde of gold stashed by the crew of Ferdinand Magellan, the Portuguese explorer known for circumnavigating the globe. The intrepid protagonists carry two cross-shaped keys, which they hope will give them access to the treasure. They face a series of obstacles: A relief of the Virgin Mary serves to activate a dart trap; heaven-and-hell iconography leads to a near-death by drowning.

Now, you might think that given the layers of Catholic iconography present in this sequence, faith or religion is definitely going to play some kind of role in the film.

Despite all of its references to Christianity, “Uncharted” offers us nothing more than a straightforward treasure hunt.

And you would be wrong. Despite all of its references to Christianity, “Uncharted” offers us nothing more than a straightforward treasure hunt.

This is a problem that occurs again and again in the film. The protagonist, Nathan Drake, is actually an orphan raised by Catholic nuns who finds himself chasing after a lost treasure, hidden by a Catholic explorer, using clues and objects that are found in Catholic locations—and yet not once in the film does he reflect on any of that.

This is particularly disappointing because the “Uncharted” series of video games from which the film is adapted actually has a history of engaging with these themes. The series spends time showing Nathan being raised by Catholic nuns in Boston, which leads to a depth of theological knowledge that aids him in his adventures.

The protagonist, Nathan Drake, is actually an orphan raised by Catholic nuns who finds himself chasing after a lost treasure.

The life of Nathan and his brother Sam at the orphanage is also richly detailed. They are the frequent objects of scorn from one nun because of their propensity for getting in trouble, and she wants to expel them. And while the priest in charge of the orphanage does not think they are quite lost causes, their lack of trust in the orphanage, and specifically this nun, moves Sam and eventually Nathan to leave.

While the film retains the idea that the Drakes grew up in an orphanage, which is named after St. Francis of Assisi, it eliminates all the crucial details that add depth to how the boys ended up as thieves and vagabonds.

The film does take some plot inspiration from the fourth game in the series,“A Thief’s End.” According to the Gospel of Luke, Christ was crucified alongside two thieves. In some apocryphal writings, they are called Gestas and Dismas. Gestas, known as the impenitent thief, joins the assembled crowd in mocking Jesus, while Dismas, the good thief defends Christ and asks him to remember him once he enters the kingdom of heaven. During “A Thief’s End,” Nathan and Sam acquire a cross featuring St. Dismas as part of their quest for the lost treasure of famed pirate Henry Avery, but Sam is shot and presumed to be killed in the process. Nathan keeps the cross for the next 15 years as a reminder of his brother; when his brother unexpectedly turns up alive, the cross turns out to be a crucial piece of the puzzle in their renewed search for Avery’s treasure.

The “Uncharted” game franchise has collectively sold over 40 million units; why mess with that success?

In the game, Henry Avery considers himself a “good thief” because he is a privateer, that is, a pirate hired by the English government to raid ships from rival nations. Nathan and Sam similarly consider themselves to be “good thieves” because they only steal from the long-dead, and Nathan’s decision to keep the cross for so many years seems to bring him good fortune. St. Dismas, the patron saint of repentant thieves, is watching out for these “good thieves.”

The game also provides an important quote from St. Dismas that becomes the thematic underpinning for the whole narrative. On the back of the cross is inscribed the Latin sentence “Digna factis recipimus”—“We receive the due rewards of our deeds.” This is taken from the words of the penitent thief in Luke 23:41 and is indicative of his repentance. It is after this that Christ replies, “Today, you will join me in paradise.”

At the end of “A Thief’s End,” Nathan finally gives up his thieving ways for good, all thanks to St. Dismas, and as a result he is spared the awful fate that befalls the rival thieves who were also searching for Avery’s treasure.

“Uncharted,” the film, has almost none of this. It does feature crosses that are used as keys to the treasure of Ferdinand Magellan, but the crosses have no figures on them. And there is no mention of St. Dismas or the importance of this good thief in the lives of Nathan and Sam, either. It is shocking and also bizarre. The “Uncharted” game franchise has collectively sold over 40 million units; why mess with that success?

A Bible is not just a book. A cross is not just a key. A statue of the Virgin Mary is not just a trap. And a video game franchise with a dynamic tapestry of Catholic culture and theology woven in...well, without all that, “Uncharted” isn’t much of a film.