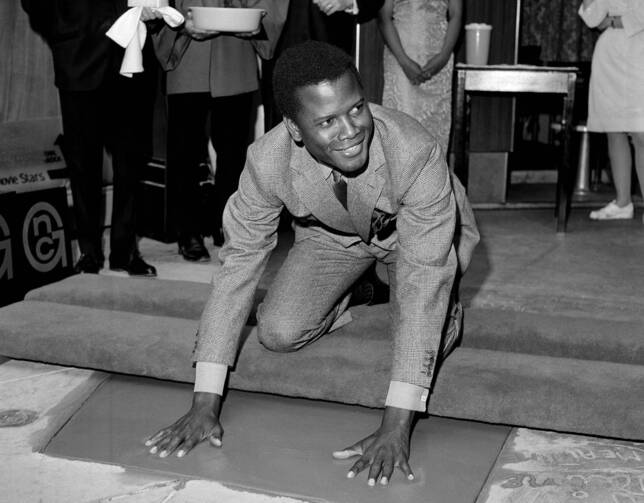 Sidney Poitier places his hands in wet cement at Grauman's Chinese Theater in Los Angeles on June 23, 1967. Poitier, the first Black actor to win an Academy Award for best lead performance, died on Jan. 6. He was 94. (AP Photo/File)

In Hollywood, one’s face has always been one’s fortune, and the second thing anyone ever mentioned about Sidney Poitier was that he had one of the more beautiful faces in film. That his face was Black was the first thing that ever came up, of course. But by the time he died—on Jan. 6, at the considerable age of 94—he had done as much as anyone to flip America’s perceptions.

No one ever began an obituary of Jackie Robinson by saying he had been the 1947 Rookie of the Year or the 1949 National League M.V.P. No one ever started a eulogy about Thurgood Marshall saying he had argued Brown v. Board of Education before the Supreme Court without first saying he was the Black man who integrated that court. Poitier’s abilities as an actor, which were considerable, always seemed to be secondary to his accomplishments in the arena of racial equality, but even those weren’t as quantifiable as a World Series championship or the legal earthquake of Brown. They were more subtle, even spiritual. They were about soul. Not his. Ours.

Sidney Poitier’s abilities as an actor were subtle, even spiritual. They were about soul. Not his. Ours.

At the time Poitier made his first real movie appearance—in Joseph Mankiewicz’s racially charged “No Way Out” in 1950—Black Americans were occupying their place on screen. A strictly prescribed place. Hattie McDaniel, by force of her irresistible humanity as well as a tremendous performance, had won a supporting actress Oscar for 1939’s “Gone With the Wind.” But she had also been playing an enslaved person.

Poitier became the first Black actor to win an Academy Award for Best Actor—not, as many have assumed wrongly over the years, for “In the Heat of the Night” or “Guess Who’s Coming to Dinner?” but for “Lilies of the Field” (1963), in which his character aids, but does not serve, a group of nuns trying to build a chapel in the Arizona desert. Thirty-eight years later, being in no apparent hurry, the Academy awarded its second Best Actor Oscar to a black man, Denzel Washington, who acknowledged Poitier’s role in having unalterably changed the landscape.

At the time Poitier made his first real movie appearance, Black Americans were occupying their place on screen. A strictly prescribed place.

How did he do so? Through dignity. Through his choice of roles, the often electrifying way he performed them and, in no small way, through his personal charisma. He made racism ridiculous. He was impossible not to like, even when his character might have been irrationally angry (“A Raisin in the Sun,” 1961), rationally angry (“The Defiant Ones,” 1958) or justifiably angry: As a colleague said in the wake of Poitier’s death last week, the scene in which Virgil Tibbs is slapped in the face by the racist Mississippi cotton plantation owner during “In the Heat of the Night”—and reflexively slaps him back—may be the most important single scene performed by a Black actor in American cinema. It made time stop. And then speed forward.

Given a career that spanned half a century (Poitier’s last acting role was in 2001), there are many moments one can point to in which Poitier influenced both movies and American thought, mostly as an actor, an activist and also as a filmmaker. The seminal Black comedy “Uptown Saturday Night,” which co-starred his fellow civil rights marcher Harry Belafonte, was directed by Poitier. “To Sir, With Love” was a critically important movie for Boomer teens, caught between the casual racism of previous generations and the progressive sociopolitical impulses of the ’60s. (“To Sir, With Love,” “In the Heat of the Night” and “Guess Who’s Coming to Dinner?” were all made in 1967, which seems remarkable.)

But if one needed a defining moment for Sidney Poitier, actor, icon and social force, it’s probably the scene in “Guess Who’s Coming to Dinner?” in which his character’s own father (Roy Glenn) uses the sad realities of American Black history to argue against his son’s decision to marry a white woman. It is a past that Poitier’s character, John Prentice, rejects in the movie, and which Sidney Poitier rejected in life. It’s a remarkable sequence even today, one in which the actor takes his character from anger to resentment to logic to reconciliation. “You think of yourself as a colored man,” John says to his father. “I think of myself as a man.” It was the right thing to say. And the right actor to say it.