AOC, the Met Gala and the dress: Femininity has the power to make the whole world talk. 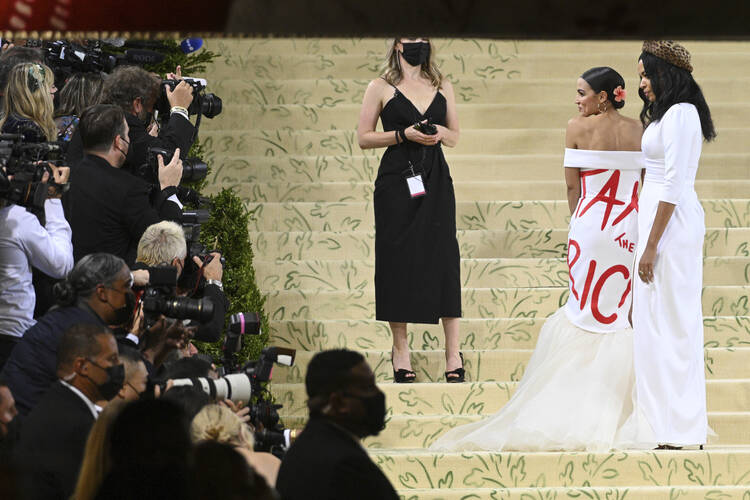 Alexandria Ocasio-Cortez at the 2021 Met Gala Celebrating In America: A Lexicon Of Fashion. (Credit:  NDZ/STAR MAX/IPx)

The front of the dress looked like a nod to Jackie Kennedy: simple, classic, elegant. But when Representative Alexandria Ocasio-Cortez turned around, she revealed the real statement she wanted to make at last night’s Met Gala, impossible to miss in big red letters:

In almost no time, the criticisms began pouring in. “Why is AOC at the Met Gala and not writing legislation?” “Someone who wants to tax the rich is at one of the most elitist and opulent events in the world?” And one of my favorites: “If you really knew how to use design to communicate your message, you wouldn’t need to write the words on your outfit.”

When Alexandria Ocasio-Cortez turned around, she revealed the real statement she wanted to make at last night’s Met Gala: “TAX THE RICH.”

The Met Gala is, of course, one of the most extravagant events there is. And it is true that it is difficult for a Catholic—for anyone—with a strong sense of social responsibility to watch the night unfold without wondering if its decadence is, at best, unnecessary and, at worst, harmful. Many of last night’s attendees, designers and celebrities alike, made a point to discuss the need for inclusivity and sustainability in the fashion industry. Some stars even made deals with the designers of their attire, only agreeing to wear the outfit if the designer pledged to make a particular ethical change to his or her practices going forward. Even so, it is easy to watch the glitz and glamour of the Met Gala and wonder what else all that money, time and material could be used for.

While Ms. Ocasio-Cortez’s attendance attracted predictable outrage from her regular critics, she made the exact splash it seems she intended to make. (Ms. Ocasio-Cortez pointed out on social media that she was one of several elected officials from New York City invited to the event “due to our responsibilities in overseeing our city’s cultural institutions.”) Her dress was designed by Aurora James, whose brand Brother Vellies was founded in a Brooklyn flea market “with the goal of keeping traditional African design practices and techniques alive while also creating and sustaining artisanal jobs.” Ms. James is a Black woman and an immigrant, and the congresswoman made a point to assemble a team for makeup, hair and wardrobe consisting of women, people of color and L.G.B.T. artists.

While Ms. Ocasio-Cortez’s attendance attracted predictable outrage from her regular critics, she made the exact splash it seems she intended to make.

One has to wonder how the other guests reacted to Ms. Ocasio-Cortez’s look when the walks up the red carpet ended, the doors closed and the oh-so-exclusive party began. As she bumped elbows with the upper echelons of the rich and famous, did they want to spend time making small talk with someone broadcasting such an obvious policy statement—and one that, some would argue, was aimed at them? Like her or not, the congresswoman went right to the source, challenging the very people she wants to fund “childcare, healthcare and climate action for all” at an event that is supposed to be their playground. As Cesar A. Cruz said, “Art should comfort the disturbed and disturb the comfortable.”

Last night’s Met Gala was not the first time Ms. Ocasio-Cortez has expressed herself and her message through fashion and beauty. She was on the cover of Vanity Fair. She shared her skin care and makeup routine in a video for Vogue. And her signature red lipstick has made itself known in the halls of Congress.

In sharing her love of beauty and style, AOC embodies one of her core messages: Femininity has power. Rather than holding her expression of femininity back in public and professional settings, she has fully embraced it and used it as a tool for communication, connection and policy-making. Her style is a visible sign of her power and influence as a woman, and she is not afraid of that.

In sharing her love of beauty and style, AOC embodies one of her core messages: Femininity has power.

Of course, many of the criticisms leveled against the congresswoman last night (and on previous occasions) make a mockery of that whole idea. The underestimation of and even downright vitriol against AOC is inseparable from the presence of sexism and misogyny, not to mention racism and xenophobia, in our nation. In her rise, the power of femininity is clearly having an impact. And that very fact makes detractors and critics very uncomfortable.

Catholics experience (and contribute to) the marginalization of women as much as any other group in America today. Society gives women roles to fill and characteristics to embody. When they embrace what they find beautiful, fun, freeing and, yes, powerful in those gender roles, we say: “No, not like that! That’s not what we meant!” From purity culture to the exclusion of women from decision-making roles to countless other manifestations of sexism, the church not only participates in the problem; it exacerbates it.

When a young woman of color uses her platform and an expression of her gender to speak on behalf of the poor—a group Catholics are uniquely called to keep in mind—why do so many Catholics take to social media to sternly and even hatefully malign her? Why are other lawmakers who attended the Met Gala not subject to such scrutiny, and why don’t we even take a moment to consider the ways in which her message aligns with fundamental teachings of the church?

If nothing else, the buzz around the dress, whether good or bad, proved her point: Femininity has the power to make the whole world talk. And if that is true, maybe it also has the power to make the whole world organize, vote, think critically and consider the well-being of their neighbors. Catholics ought to recognize and celebrate the power of femininity. If we want to make the world a better place for the poor and the suffering, this power is essential to our mission, from our parish communities to top levels of government—and even to the world of fashion and popular culture.

John Mulaney has fallen off his nice-guy pedestal—and he might have something to teach the Catholic Church.
Jim McDermott

Whether you personally believe the answer to our problems is to tax the rich is not the question when so many of the loudest critiques do not engage with that idea at all, but instead with the character, the beauty, the culture and the qualifications of the woman wearing that message on her body.

Molly Cahill is an assistant editor at America. She was a 2020-21 O'Hare Fellow.