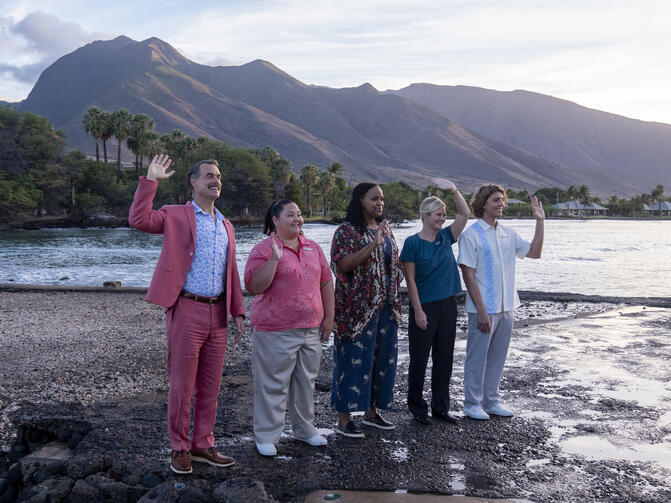 Was it the prickly social tensions among the rich white guests at an expensive Hawaiian resort, which only seemed to get thornier with each plot turn? Was it the behind-the-scenes drama roiling the staff of the hotel named in the title, led by a tightly wound Australian named Armond? Or was it simply that Cristobal Tapia de Veer’s poundingly percussive score, full of shrieks and hoots that sounded alternately like cackling mockery and screams of pain, kept insisting that all was not well among these well-heeled vacationers?

The answer is probably a bit of all of those things, and something more. The series’ writer/director, Mike White, is a master at an off-kilter tone, a cringe-comedy sensibility that pushes complicated characters to extremes—not quite cruelly but also without undue sentimentality, as in his previous HBO series, “Enlightened,” or his breakthrough 2000 film “Chuck and Buck.” In “The White Lotus” he has honed and sharpened this signature tone into a sleek weapon, and his target isn’t just the unthinking white privilege or blinkered pettiness of the guests.

I think what got under my skin about this show from the beginning is that I recognized White’s true subject as nothing less than spiritual sickness, fueled by the existential dread of folks with no material wants who nevertheless don’t know what to do with their lives or how to spend them happily with each other. After a year and a half spent in close proximity with my own family, both in lockdown and on a few vacation getaways—all while the outside world has seemed to teeter precariously—these questions hit very close to home.

Mike White is a master at an off-kilter tone, a cringe-comedy sensibility that pushes complicated characters to extremes.

To be clear, my family is neither as privileged nor as dysfunctional as the guests at “The White Lotus.” But I’d be lying if I said I didn’t recognize their conflicts or feel complicit in their casual monstrosity. Take the callow young couple on honeymoon, Rachel (Alexandra Daddario) and Shane (Jake Lacy), whose physical chemistry can’t begin to bridge their yawning differences in class, ambition and sensitivity to perceived social slights; Shane is one of those nightmare customers who won’t let any grievance go to waste.

Or consider the Mossbachers, a California family led by a type-A tech mogul, Nicole (Connie Britton), who can barely relax, let alone stand the company of her hapless husband, Mark (Steve Zahn), her daughter, Olivia (Sydney Sweeney), or her troubled, screen-addicted teenage son, Quinn (Fred Hechinger). That Olivia has brought along a ​​mixed-race college friend, Paula (Brittany O’Grady), only deepens the fault lines in this messy family, who collectively paint a bleak portrait of contemporary life as anguished as it is uncomfortably funny.

As despairing about humanity as “The White Lotus” can feel, White’s vision is finally not a tragic one.

Another unstable compound of humor and horror can be found in Tanya, an unhinged woman toting an urn of her mother’s ashes and emanating emotional neediness like an overpowering perfume. As played by the peerless Jennifer Coolidge, Tanya has the contours of caricature but the soulfulness of a wounded animal. Fused to her wealth, she has a transparent pain that makes her both pitiable and terrible, particularly in the way she toys with the professional aspirations of a well-meaning spa director, Belinda (Natasha Rothwell). Tanya’s suddenly watchful quiet, as her journey takes a sweetly if temporarily positive turn in the final episodes, is something to behold.

At the intersections of these crossing plotlines is Armond, the live-wire hotel manager, who begins the series with a lecture to a new employee, a native Hawaiian, about the purported “Japanese ethos” of the business. “We are asked to disappear behind our masks as pleasant, interchangeable helpers,” Armond tells Lani (Jolene Purdy). “It’s tropical Kabuki, and the goal is to create for the guests an overall impression of vagueness that can be very satisfying.” The speech isn’t just offhandedly racist; it will also prove to be a deeply ironic mission statement for a man whose own mask, a cheery rictus of a grin, barely conceals his intense hatred for the people he serves, and whose true ethos appears to be closer to controlled chaos.

If Armond is the show’s animating antagonist, its unlikely hope may be Quinn, the teenaged son who begins the show sulkily glued to his Nintendo Switch and ends it, let’s just say, in a much better place.

As despairing about humanity as “The White Lotus” can feel, and as shocking as some of its plot turns get, White’s vision is finally not a tragic one, and his narrative tendencies ultimately bend more toward closure than rupture. In this case, though, that sense of closure carries its own barbed critique: He has just anatomized a world of postcolonial white privilege, after all, that was overdue for some transformative disruption.

That it looks like things will muddle on much as they did before for these flawed characters feels unnervingly true to our current moment, when the understandable craving for a return to “normal” tempts us to ignore the soul-searching we have been compelled to do over the past 18 months. Are we really going to behave as if a year-plus of pandemic and protest didn’t make us question the meanings of our lives, our politics, our purpose? Are we going to return with relief to lives of conspicuous consumption and leisure, to an “overall impression of vagueness that can be very satisfying”? It’s no wonder “The White Lotus” made me feel uneasy: Another meaning of “vacation,” after all, is emptiness.