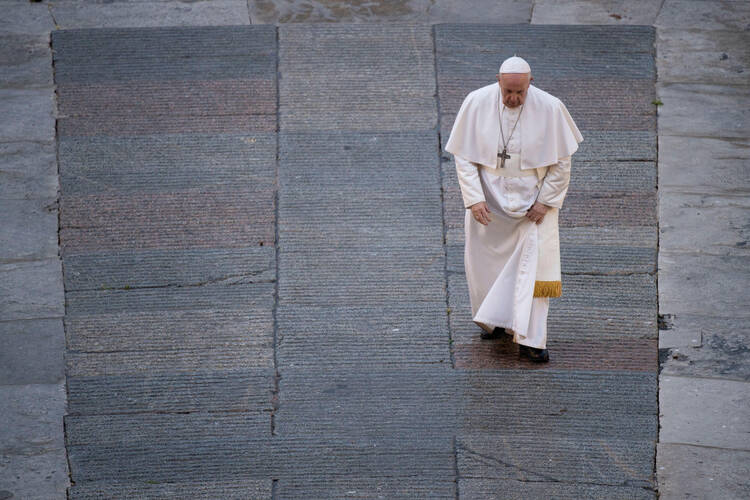 Photo still from ‘Francesco,’ a documentary from Evgeny Afineevsky

That the panegyrical and often magisterial “Francesco” will be about the apostolic journeys of Pope Francis is clear right away. But it takes some time to realize that those journeys will vary in their length, and in their nature.

The trips the pontiff takes to hotspots around the world—bringing the media with him, and the inevitable global attention—are given the heroic portrayal they deserve. Inspiring in a different way is a solo nighttime sojourn across St. Peter’s vacant square, eerily emptied by the pandemic, a walk by one man that emphasizes how singular he is and how courageous he needs to be. The moment is shamelessly cinematic—and grandly poetic.

“Francesco” dissolves much of the distance between the pope and the people of all faiths who embrace him.

But there is yet another trip undertaken by Francis, one his own heart has to make, and it provides a through-line for this almost-two-hour, often glorious-looking film from the director Evgeny Afineevsky (of the Oscar-nominated “Winter on Fire: Ukraine’s Fight for Freedom”). It includes very intimate moments with the pontiff; among the virtues of “Francesco” is the closeness it provides to a man who, despite eschewing much of the ceremony and adornment associated with his holy office, remains a remote presence for most viewers. “Francesco,” by the nature of its camerawork alone, dissolves much of the distance between the pope and the people of all faiths who embrace him. So do the dilemmas shown in the film.

The peripatetic pontiff is pursued around the world; his life story, including what turns out to have been a valiant defense of his friends and colleagues during Argentina’s “dirty wars,” is revisited. So is his record on the church’s existential problem of child sex abuse. As we are shown about 30 minutes into the film—after Francis’ missionary zeal has been well established, along with his political agenda—he made an early 2018 visit to Chile, where he was confronted by a reporter who asked him about the Fernando Karadima case, and the alleged coverup of the priest’s child sexual abuse by several clerics, specifically Chilean Bishop Juan Barros Madrid. “Slander,” Francis declares. There is no evidence against Barros, he says. When there is, ask me again.

Amid all the diplomatic missions and human-rights efforts, he does not let the issue of priestly abuse go cold.

It is an alarming moment. Is Francis a pope who fearlessly confronts problems around the world but can’t clean his own house? As we see, the film’s subject has traveled from monsoon-battered Philippines to the war-torn Central African Republic to Lesbos, where Syrian refugees wash up on the shores both dead and alive. In Myanmar, where the word “Rohingya” is banned from official discussion, he nonetheless champions the cause of the persecuted Muslim minority, citing genocide where he sees it (including in 1915 Armenia, a declaration that caused Turkey to recall its Vatican ambassador). But amid all the diplomatic missions and human-rights efforts, he does not let the issue of priestly abuse go cold.

The Karadima case surfaces several times as the film proceeds; the evidence mounts. To the utter astonishment of the priest’s most public accuser, Juan Carlos Cruz, the pope does not mount the coverup Cruz expected. Quite the contrary. Karadima is defrocked. There is a shakeup of the entire Chilean church. Public apologies are made.

Analysis: What is going on at the Vatican’s communications department?
Gerard O’Connell

Meanwhile, the pope of “Francesco” travels, almost always clad in his simple, unadorned trademark white and fighting, as often as not, the unpopular fight (at least among politicians). Always, there is the aim of bringing disparate groups together. Afineevsky’s message is that Francis is precisely the pope we need in what has developed into a golden age of wickedness, of capitalism run amok and of craven political opportunism. None of it, we see, is he afraid to confront, whether the challenge be the environment, genocidal regimes or the separation of children from their parents at the Mexican-U.S. border.

Francis comes very close to calling Donald Trump the devil at one point, a view with which some may disagree. But the point of the movie is that he can confront evil and make friends at the same time. “At building bridges,” someone says, “Bergoglio is a genius.” And he’s not afraid to break a few eggs, or egos, to do so.