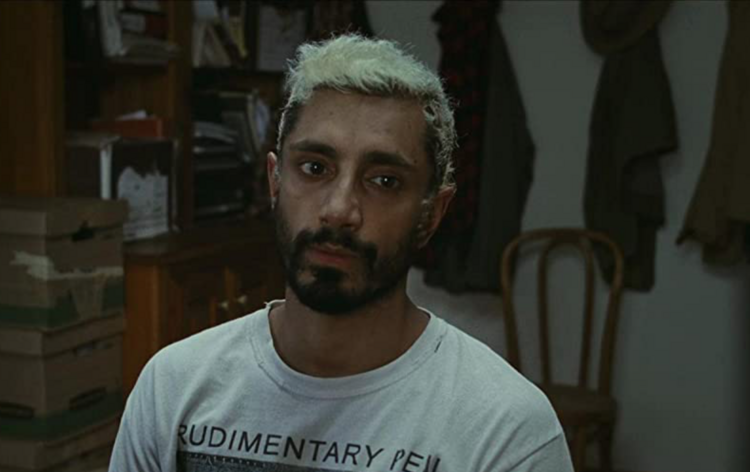 Riz Ahmed as a drummer going deaf in "Sound of Metal" dir. by Darius Marder.

Darius Marder’s directorial debut “Sound of Metal,” now streaming on Amazon Prime, is in many regards a simple film. It stars Riz Ahmed (“The Night Of”), who plays Ruben Stone, a punk metal drummer who loses his hearing. The film’s low-budget production is a study in how quality filmmaking can be achieved with few resources.

Stone is a drummer in a two-person heavy metal band—Blackgammon—with lead-singer and guitarist Lou (Olivia Cooke). They are on tour in their silver-bullet Airstream motorhome, living a sober existence of early morning exercise, healthy breakfast shakes and nightly shows in different cities.

Very early on in the film, in the middle of one of their sparsely attended underground performances, Ruben begins to experience severe hearing loss—a traumatic event that could threaten his four-year abstinence from heroin use. Lou wants to cancel the tour.

The film is largely devoid of gratuitous eye candy, and yet the movie's austerity riveted me.

She calls Hector, Ruben’s sobriety mentor, who gives Lou directions to a deaf community for recovering drug addicts. The community is run by Joe (Paul Raci), an impassioned sage who can help Ruben mitigate his fall into the abyss. But Ruben must first accept his deafness and learn to be still.

At one point, Joe asks a rebellious Ruben, “I wonder, all these mornings you’ve been in my study, sitting, have you had any moments of stillness? Because you’re right Ruben, the world does keep moving and it can be a damn cruel place. But for me, those moments of stillness—that place—that’s the kingdom of God.”

“Sound of Metal'' was inspired by “Metalhead,” a scrapped film project by co-writer Derek Cianfrance (“I Know This Much Is True”) based on a true story about a drummer who loses his hearing. The film is largely devoid of gratuitous eye candy. There is nothing to gawk at visually, there are no over-the-top action scenes, no big sets, no sex, no SFX, no chase scenes, no clever over-produced sequences of any kind.

And yet, after the nearly two hour runtime concluded, the movie’s austerity had riveted me. It seeped into my nervous system and appeared both in my dreams and my waking hours for the next few days like a great whale’s hump in turbulent waters.

Darius Marden’s cast and crew accomplish so much with so little. They achieve an alchemical balance of technical savvy, preparation and powerful thematic content. In order to play the character of Ruben Stone as authentically as possible, Riz Ahmed studied how to play the drums for six months. In the opening sequences of the film, set in a small club, Ahmed actually plays the drums as Cooke sings and plays the guitar.

Many of the men and women and young students in the deaf community where Ruben must go to “learn to be deaf” are non-actors who are either deaf or know sign language, or both, lending an undeniable authenticity to the project.

Nicolas Becker weaves together sound with microphones that can be inserted in the mouth and throat, others that pick up the actor’s heartbeat, blood pressure and even sounds of skin and eyelids.

The technical element of the film that is getting a lot of attention in the media is the immersive sound design by Nicolas Becker (“Gravity,” “Arrival,” “Ex Machina”). Becker has an extraordinary ability to create a highly subjective audio experience. He weaves together sound recorded on location with special microphones, some that can be inserted in the mouth and throat (to capture sound from inside the body), others that pick up the actor’s heartbeat, blood pressure and even sounds of skin and eyelids, creating layers of sensory narrative experienced through the soundscape of the actor’s body.

Many of the men and women and young students in the deaf community are non-actors who are either deaf or know sign language, or both.

As Ruben’s hearing deteriorates, the audience experiences it with him through a disarmingly organic interpretation of what it might be like to actually go deaf. (For select scenes, Becker also inserted special earbuds into Ahmed’s ears to block and distort the actor’s ability to hear.)

After Ruben loses his hearing, he descends into a personal hell. He cannot achieve his goal of completing the tour. He will be separated from Lou, his codependent bandmate, who has kept him in check for their four years together. (He stayed away from drugs and she desisted from cutting herself. It was probably the healthiest relationship either of them had known.)

Ruben’s life becomes uncertain and changes at a pace too rapid to process. When Lou insists that Ruben stay with Joe and the community, he is told that it must be done alone, away from her, with no contact to the outside world. After Lou’s departure, Ruben sits in the dark rural setting on the steps of their Airstream motorhome with tears in his eyes. His pain is palpable.

St. Paul’s personal burdens come to mind during this dark moment in the film: “I know that no good dwells in my flesh… I am a wretched man; who will free me from this body doomed to die?” Ruben tail-spins, a drug relapse imminent.

Joe and the deaf people become an everyday reality for Ruben, a blessing to a man who can no longer hear, much less see. Life is simple. He is loved, valued, needed. At a playground, Ruben bonds with a deaf student from a nearby school who is awestruck by the heavy-metal rocker. The teen presses his unhearing ears to the stainless metal of a playground slide as Ruben drums a simple beat for him, and the boy joins in. Their connection is formed through the body’s resonance, without the use of words, and it is deeply emotive.

When Joe warns Ruben that deafness is not something to be “fixed,” Ruben ignores him. He does not yet accept that deafness is not the real problem. Ruben decides to sell the Airstream and all of his musical equipment in order to raise the large sum of money needed for a cochlear implant, a device that transmits approximate sound information to the brain.

2020 in review: Some of the best films you should see from a surreal year for cinema
John Anderson

Ruben’s insistence on fixing his deteriorated hearing leads him away from the offering of love and acceptance that his soul is craving and which the community is clearly providing. This distancing holds the danger of leading him back to a life of a spiritual invalid, addicted to something perhaps much more destructive than heroin: noise.

Ruben has not welcomed his own human fragility as a condition deserving of love and acceptance. As he tells Joe in a desperate appeal to self-reliance, no one else is going to save his life if he just sits there and “diddles around.” He has rejected the help of those around him, and thereby the core of what makes him human.

Ruben’s struggle is an achingly familiar one—be still and know God—by accepting God’s gifts (in this case, silence and stillness), or, keep the mask on and keep running.

Deniz Demirer is a Polish-born writer, actor and filmmaker. His five feature films include "Nocturnal Jake," "American Mongrel" and "Ezer Kenegdo," with two films currently in development. He is director of photography and a video producer at America. www.demirerfilm.com