Disney+’s ‘Clouds’ details a teen’s cancer story. His real-life mom explains how faith got them through it. 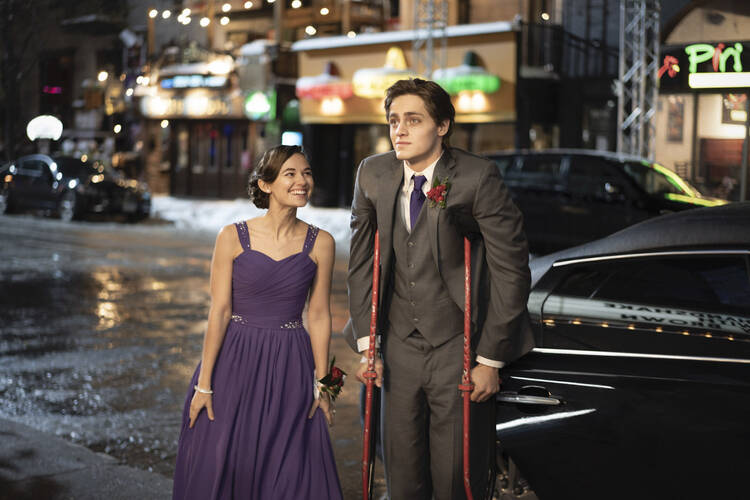 When the high school student Zach Sobiech was diagnosed with cancer, he and his family never could have imagined how many people would hear his story. The new Disney+ film “Clouds,” which recounts the last year of Zach’s life after finding out that his osteosarcoma was terminal, is inspired by the amazing journey he took after releasing his viral song of the same name.

Since Zach passed away in 2013, his mother, Laura, has worked with her family to keep Zach’s legacy alive. Ms. Sobiech wrote a memoir about the experience of losing her son and of being guided through the tragedy by God’s grace and her family’s faith.

When Ms. Sobiech spoke to America, she was open about the “surreal” experience of watching one of her family’s most personal and painful experiences play out on film.

“When you’re living it, especially with something like childhood cancer, you’re going day by day. You don’t have the opportunity to look around and take it all in.”

“Obviously it was really exciting for us, but there’s heartbreak in it too,” she said. “When you’re living it, especially with something like childhood cancer, you’re going day by day. You don’t have the opportunity to look around and take it all in.”

Even in the midst of that heartbreak, Ms. Sobiech and her family were very pleased with how the film turned out, with how the director Justin Baldoni and the leading actor Fin Argus “embodied and captured the spirit of Zach.”

“Clouds” is touching in its simplicity and honesty. It reveals the strange tension that Zach Sobiech and his family spent the last year of his life painstakingly navigating. As Zach approaches high school graduation knowing that he will not go on to the same path of college and career as his classmates, he throws himself fully into life experiences, even with the knowledge that those experiences are, too quickly, coming to an end.

The film is also fascinating in the way it infuses the Sobiech family’s Catholic faith into the story. A pilgrimage to Lourdes to bring Zach the healing power of the baths there, Marian and other religious imagery, conversations about the Psalm and Gospel readings Zach wants at his funeral Mass—these are the moments that will feel very familiar to Catholics.

This delicate and yet ever-present depiction of faith was another of the film’s elements that pleased Ms. Sobiech. “As for our faith journey…. Oh my goodness, it’s why we survived,” she said. “Really we felt like God was entrusting us with this story, to share it. Without our faith, without our belief and understanding that this isn’t really the end, I think we would have fallen into despair. And honestly, that’s kind of what I see happening in our world today. This, maybe, lack of faith has led to this despair.”

Ms. Sobiech wanted everyone, Catholics and non-Catholics alike, to be able to connect to Zach’s story. Instead of preaching her family’s faith, she wanted it to be clear in their words and actions: “We want it to be that when you look at our family and you watch this film, you see it. You can see it played a part. But we don’t want to feel like we have to spoon feed it to people.”

Ms. Sobiech admitted that she felt spiritually exhausted throughout much of Zach’s last year, which led to difficulty in her prayer life. As a result, she leaned heavily on her support system of friends and family, “relying on them to carry [me] in prayer.” Often, she herself didn’t know what to pray for or how to pray.

"Really we felt like God was entrusting us with this story, to share it. Without our faith...I think we would have fallen into despair."

Her difficulty in prayer also came, in part, from the pressures to respond to Zach’s diagnosis in a particular way.

“There’s this sort of mentality, especially with kids who are sick, that you have to travel the world looking under every rock for a cure,” Ms. Sobiech said. “And if you’re not doing that, you’ve ‘given up.’ So you fight for as many days as possible.”

As she was trying to lean into this motherly responsibility to do everything in her power to save her son’s life, it was difficult to simultaneously trust in God’s will with complete faith.

Eventually, Ms. Sobiech found a prayer that reflected what she wanted to say to God. “I settled on Christ’s prayer in the garden of Gethsemane before he was crucified,” she said. “I don’t want to do this, this isn’t what I want to do…. But not my will but ‘your will be done.’”

“The beauty of this story for me is that God used this very imperfect family to be a channel of his grace into the world and do amazing things,” she said.

She added a bit of her own desire to that prayer, too: “I really want your grace and the grace of Zach, and through his story, I want somebody’s life to be changed forever. I don’t even have to see that person. I just want to know that it’s happened.”

Through Zach’s music and now through the film’s reach, Ms. Sobiech’s prayer has been answered many times over. “The beauty of this story for me is that God used this very imperfect family to be a channel of his grace into the world and do amazing things,” she said.

The end of “Clouds” shows Ms. Sobiech and her husband reading a “college essay” that their son wrote before he passed away. In it, he shares about how he hopes to be remembered and about the lessons terminal cancer has taught him about the fleeting nature of time and the incredible importance of relationships. In it he writes, in encouragement to all his surviving loved ones, that “you don’t have to find out you’re dying to start living.”

Ms. Sobiech said that Zach was adamant that his family continue to work to help other young people who suffer from osteosarcoma. Since his passing, the Sobiech family has established the Zach Sobiech Osteosarcoma Fund, which asks people to “help us finish what Zach started by fundraising for better, safer treatments and cures for osteosarcoma.”